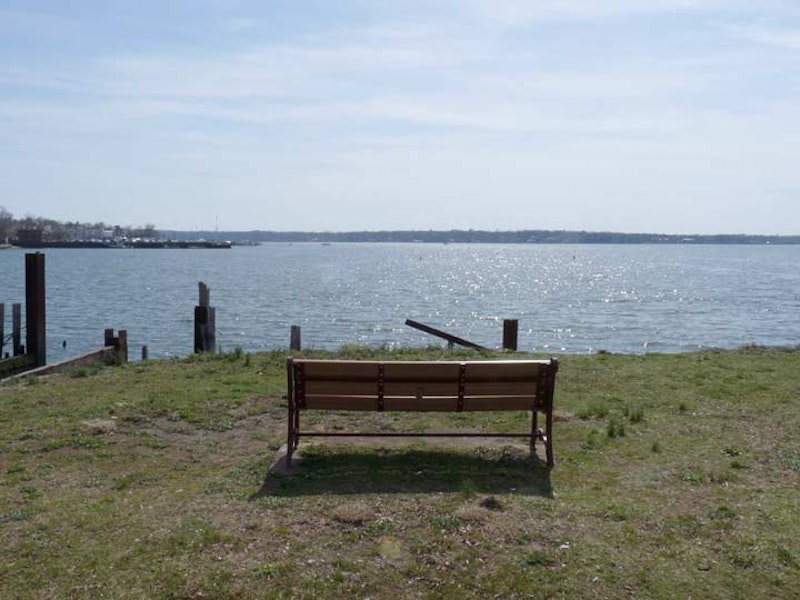 One of my unlikeliest associations during my to-date six decades in the world is the twelve years I spent working in Port Washington, NY in two separate stints between 1992-1999 and again from 2006-2011 for Publishers Clearing House, the magazine subscription and household goods distributor famed for its frequent sweepstakes giveaways. The company had been founded in 1953 in the Sands Point basement of Harold Mertz and took off in the late '60s when the sweepstakes was instituted as a company promotion. Prior to working at PCH, I had usually had night jobs in smoky, dusty print shops, riding home on the mugger-mover between 4 and 8 AM. Working daytimes in Port Washington, a scenic town on Long Island’s north shore with a number of historic attractions, was quite unlike what had gone before and what has come along since. 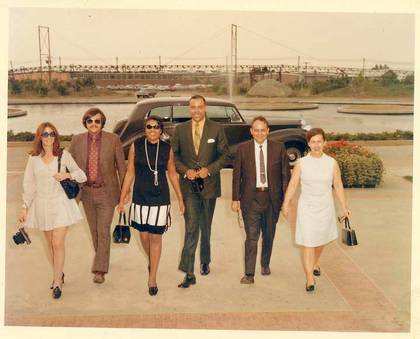 I still assert to this day that I charmed my interviewer at PCH, a tall, pleasant young woman named Valerie, into hiring me as a copy editor by asking at the end of the interview, “so when do I find out if I’ve won?” About a month later the call came that I had. For a few months, I commuted to Port Washington from Bay Ridge, which meant catching the R train, changing to the N, then the #7 at Queensboro Plaza, and then catching the Long Island Rail Road Port Washington branch at Woodside, and reversing the process to go home. I moved to Flushing Queens in 1993 and then to Little Neck in 2007, both residences a short walk from the railroad, to make commutes much shorter.

Many people have a notion that the Publishers Clearing House sweepstakes is a fake and that no one wins the $1 Million, $10 Million, $5,000 a Week for Life, or any of the lesser giveaways the company does. This is a false assertion, as winners were frequently feted at company headquarters, a sprawling, one-story building on a former sand pit on the north side of town. Pictured above are the families of three such winners who have just been limo’ed to PCH headquarters in 1970. Odds for winning some of the contests, though, are one in a billion! In the background of the picture, you can still see a conveyor belt that brought sand from one of the still-working sand mines to barges on Manhasset Bay.

My first stint at PCH was more entertaining and fulfilling than my second. In 1992 I was brought in as a proofreader, but was quickly moved over to the design studio when word got out that I knew QuarkXPress, the design software of choice in the 1990s (the mantle has since passed to Adobe InDesign). Later, my work with the company newsletter prompted another move to the copywriting department. It was a very pleasant work atmosphere, almost like a country club. The bottom dropped out, though, in 1999 when PCH settled a number of multimillion-dollar lawsuits brought by people who believed PCH used deceptive advertising to lure them in (common sense should have told them that, no, they probably “hadn’t already won” without consulting the fine print). The company laid off half of its 1,000 person staff, including me.

I returned in 2006 when I got news that the company needed someone to proofread the product flyers, envelopes, product stamp sheets, etc. that were included in mailings. By then though PCH was running employees through the usual annual gauntlet of “goal settings” and “self-evaluations” and there was considerably more pressure than there was in the '90s; I wasn’t permitted to switch departments as I had in my first stint. Another employee purge occurred in 2011 and once again, I was out on my ear. 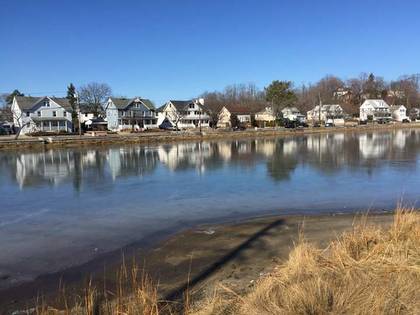 While most of my coworkers drove down to one of the malls or shopping centers for lunch, I roved about Port Washington, visiting the nearby Manhasset peninsula or circumambulating one of the town’s many ponds that were formed by damming streams. One of these is Mill Pond, which used to support grist mills and feed stores decades ago, but now is home to an annual model boat race. Full size regattas are held in Manhasset Bay. 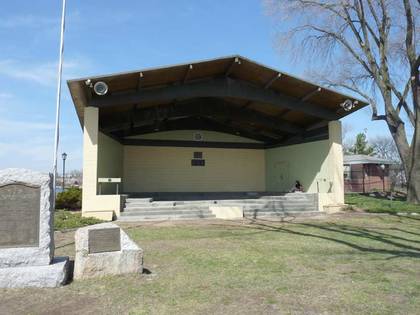 Sometimes I would walk north into the Sands Point area, where John Philip Sousa had lived and which reputedly inspired “East Egg” where the lonesome millionaire Jay Gatsby threw lavish parties in F. Scott Fitzgerald’s novel. Co-workers could immediately tell I had been on a lengthy Sands Point walk in the summer when I would come back sweat-stained at lunchtime (showers had actually been included in company headquarters when it was built in 1967). Very occasionally I would walk south to Port Washington’s downtown area clustered along Main Street, or to Sunset Park and its bay views. The park boasts the acoustically-calibrated John Philip Sousa Bandshell, until lately the town’s chief concert venue. 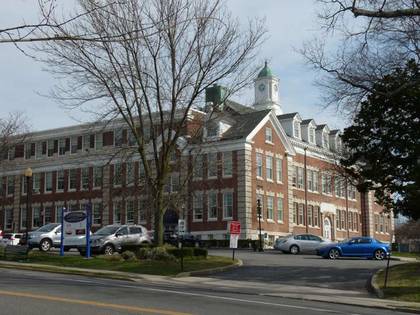 Without a doubt one of the two crown jewels of Port Washington is Landmark on Main Street, a sprawling Georgian building perched on a hill constructed as a high school in 1909. Since then it has served a stint as a grade school as well, but the school moved elsewhere in 1985 and for a short time, it was under the gun of developers. Fortunately, it has been preserved as a premier concert venue for popular, chart topping artists. Recent concerts have featured the likes of Rufus Wainwright, Mavis Staples, a double bill of '70s favorites Karla Bonoff and Livingston Taylor (James’ brother). I visited in January 2016 for my favorite eccentric British folk rocker, Robyn Hitchcock. 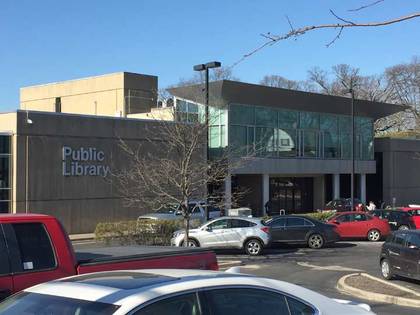 Located just across Main Street is Port Washington’s award-winning public library, opened on the site of a former Methodist church in 1970. It’s constructed in a  concrete-clad Brutalist style, not one of my favorites, but the library makes it work with plenty of picture windows facing Manhasset Bay. There are art exhibits and an auditorium where I presented a slide show in 2007 after the recent release of my book Forgotten New York. 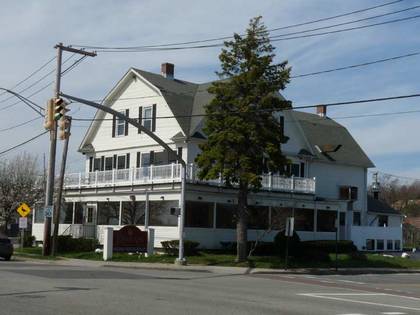 In the late 1890s and early 1900s a cluster of lavish hotels were constructed on Main Street and Shore Road. Pretty much only one of those buildings remains, the Renwick at Shore and Mill Pond Roads. When built, this was a town center with grist mills, post office, general store, bike shop, and a fish market. The Renwick operated as a hotel until 1938, when a succession of restaurants occupied the building, including the present one, Indian restaurant Diwan. 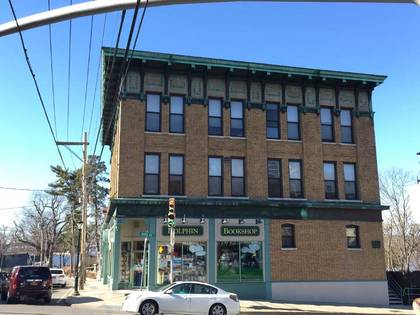 Still one of the taller buildings in “Port,” the Bayles building is an Italianate brick and terra cotta building at Main Street and Shore Road constructed in 1916 to house the A.C. Bayles drugstore, which remained there for over 50 years. Bayles (pronounced “BAY-lez”) arrived here in 1869 and amassed savings while working for a local general store, making enough to open the drug store and then purchasing property that he would eventually make a mint on by selling it to the Long Island Rail Road, which extended to Port Washington in 1896. When Bayles died in 1941 at age 95 he was the oldest pharmacist in New York State. 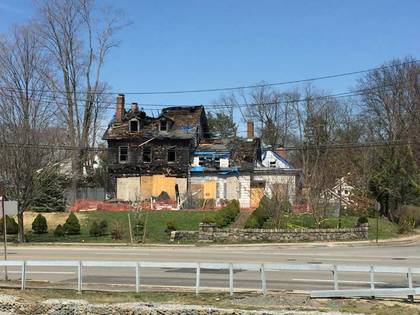 One of the earliest homesteads in Cow Neck, a community in northern Port Washington, still stands (barely) at Shore Road and Central Drive at the edge of the ritzy private community of Baxter Estates. The first home on this spot was built in 1673 by John Betts and Robert Hutchings; they sold the land to Oliver Baxter in 1743, who constructed the current house that had been expanded by the Baxter family in 1913. The Baxters were shipbuilders, sea captains, whalers, and blacksmiths. History seeped from every pore of this building. Before the white man, Native Americans retained a settlement here; during the Revolution, Hessian troops were billeted in the house. In 1895 it was Port Washington’s first library.

Unfortunately, the Baxter House fell on hard times in the 2010s when its owner failed to maintain it or reside in it; in fact papers had been filed to permit its demolition. On February 5th a blaze swept through, and the building is in its present blackened condition: a monument to neglect.

In 2016, word came that Publishers Clearing House is moving to a corporate park in Jericho this year, near the exact center of Nassau County, and has already sold its current headquarters. When I arrived in 1992, the building still had much of its 1967 décor, with exposed brick and central atria letting sun in. What had been PCH headquarters will likely be razed, and residences will be built in its place.