There’s no beauty outside struggle. 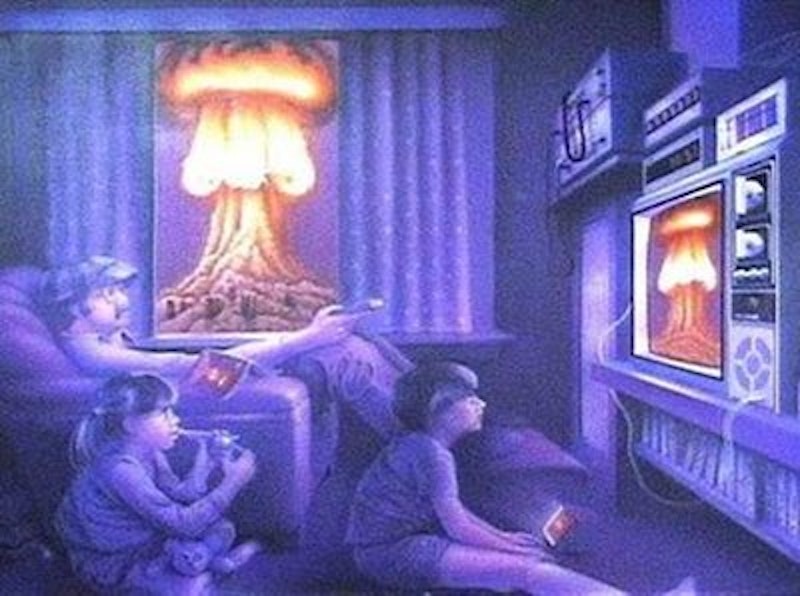 The most important lesson imparted by the LSD experience is that you’re under no obligation to be the person you were five minutes ago. One must always be willing to adjust one’s beliefs and behavior patterns based on new data. This is why LSD is so effective in treating addiction disorders.

After much introspection and careful review of the facts, I’ve come to the conclusion that my lifelong anti-war activism has been a complete waste of time and effort. If this last electoral spectacle has taught us anything, it’s that the war machine is going to have its way, regardless of any pretense of democracy. War is good business, and the business of America is business. I’ve been operating under the delusion that peace is desirable, that people are fundamentally good. Last year, thanks to the Black Lives Matter crowd, I got quit of the ridiculous contemporary superstition that the various breeds of homo sapiens are possessed of equal abilities. Is a border collie equal to a pit bull? This year, thanks to the all-powerful Deep State, I have come to recognize the inevitable beauty of warfare and mass genocide. As Italian Futurist F.T. Marinetti succinctly put it, “War is the world’s only hygiene.”

My only issue now is with the way the war is being conducted. That monstrous bomb we dropped on the Afghan-Pakistan border was a nice start, but we need to stop pussyfooting around. We’ve spent trillions of dollars developing a matchless arsenal of nuclear, biological, and chemical weapons. We’ve got weapons nobody’s ever heard of, straight out of science fiction, the most amazing array of murder weapons ever assembled. We’re like some rich guy who collects rare cars but never drives them. Where’s the fun in that?

We should drop a few nukes on North Korea and deploy a couple of hundred camera-equipped killer robots to tear any remaining survivors limb from limb, and put it all up on YouTube. That would make an impression. Afghans eat with their hands. I’m sure we have some exceptionally unpleasant biological agents appropriate to their culture. Napalm the poppy fields and spray them with Agent Orange to insure that nothing ever grows there again. We have a shit-ton of VX lying around. That would have an effect in Mecca, during the annual Hajj. Then we could nuke Riyadh, Mecca, and Medina. Throw in Jerusalem and Dimona, and call it an accident.

An Ebola outbreak in Turkey would be fun. I really like the idea of Erdogan waking up with his son’s head in the bed, maybe stitched to the body of a pig. Dropping a nuke on Hanoi for the Fourth of July would demonstrate a noteworthy vindictiveness and willingness to harbor a grudge. If Pope Francis has anything to say about it, we could send a team of Navy SEALS into the Vatican to cut him down like Osama bin Laden and expose the vaunted Swiss Guard as the dickless prancing queens they’ve become. How many nukes does the Vatican possess?

Here at home, we could legalize everything and let the chips fall where they may. Open the prisons. We’d be free at last to lie, cheat, steal, rape, and murder each other at will: free to be you and me. After a few years of chaos, it’d be paradise. There’s no beauty outside struggle. The truth is more important than peace. That’s a fact.

It’s solipsistic to believe that others are as enlightened as we are. There’s an overabundance of human life on this planet, most of it operating at the most basic simian level. Peace is overrated. Peace is stagnation. We need to move forward. We need total war. Hail Satan! Drop acid and bark at the full moon.