Original Sin: It's Back! 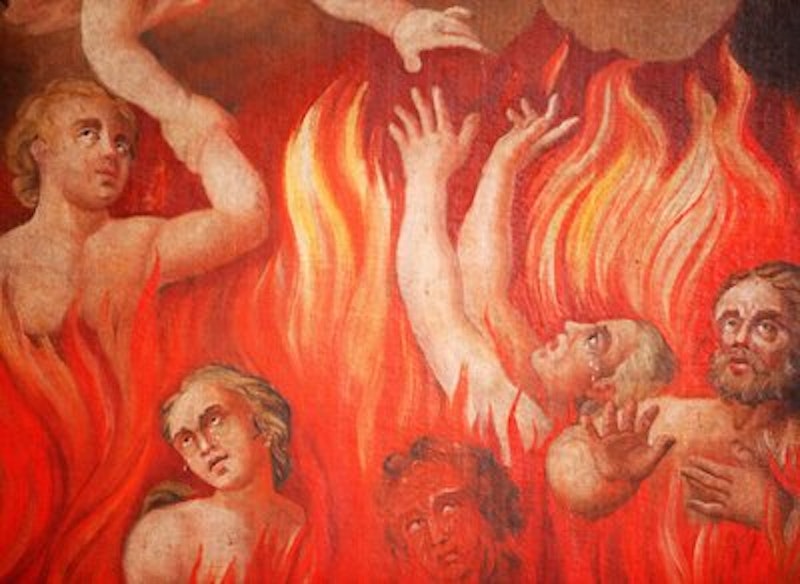 The great Puritan minister and philosopher Jonathan Edwards characterized the dark doctrine of original sin as follows: "Mankind are all naturally in such a state, as is attended, without fail, with this consequence or issue, that they universally are the subjects of that guilt and sinfulness, which is, in effect, their utter and eternal ruin, being cast wholly out of the favor of God, and subjected to his everlasting wrath and curse." He concludes that every single one of us, including newborn infants, deserves to be spit-roasted by Satan in eternal hellfire, and that most of us will be.

The notion of the inherent depravity of human beings, a curse bequeathed on his posterity by Adam, and which we owe to people like Paul and Augustine, seems depressing, and it also seems over. In the usual narrative of American intellectual-spiritual history, the pessimism of Edwards and the Puritans about human nature was superseded by the optimism of Emerson and the Unitarians, not to mention Barack Obama: we are all beautiful children of God. Sometimes we do wrong, because we're thinking in a distorted way or making mistakes, but we'll fix that in time, and form a more perfect union.

Without trying to defend the theology involved, the doctrine of original sin has certain empirical advantages: it comports better than Emerson/Obama view with the data, we might say. When something like the Las Vegas mass shooting happens, people want explanations. This is a particularly hard one to figure out so far: no sign that the shooter was Instagramming with ISIS or frequenting the websites of violent white supremacists. No diagnosis of paranoid schizophrenia, enthusiasm for conspiracy theories, and so on.

Something that’s remarkable about the current atmosphere of terror is that, though the ideologies, religious convictions, mental conditions, weaponry, and nationalities of the killers varies, the form of the action itself stays pretty constant: they try to kill as many random people as possible, and then themselves. The impulse is to annihilate absolutely everyone, including themselves; people hate and want to expunge their whole species, and they often include themselves in their assessment.

Though dealing with other people is sometimes inspiring and often just sort of indifferent, it also tends to have very bad patches. Most people probably have lingering resentments, and a lot just live through demonstration after demonstration of how bad people suck—how untrustworthy, thoughtless, self-interested, and stupid we are—until they’re completely destroyed. And this isn’t even to broach questions about how we act collectively, about bigotry and exploitation and war and genocide: perhaps nuclear weapons are our impulse to murder-suicide, writ as large as the species and the planet.

One thing that all these data points might indicate is that we’re fundamentally flawed as a species, which might be conceived in evolutionary or theological terms, but which is hard to ignore if you watch a lot of CNN. Our problem might not be radical ideologies, or social media, or neo-liberalism, or even gun laws. Our problem, which is also a problem for other species and for the planet, is us.

I feel all these things within myself: I feel love and generosity, but I also feel the rage and hatred, the other-annihilating and self-destructive impulse. I've had a hell of a time dealing with people, and at least as much hell dealing with myself. I feel the sort of self-loathing that might lead a Puritan to the doctrine of inherent depravity. Even Emerson, that optimist, said that he felt within himself the capacity for every crime, that he was acquainted with the thief, liar, murderer, and rapist within. I hate to say it, but perhaps events like Las Vegas are us, expressing our nature.

These thoughts are dark. Well, I feel dark about you and myself in the face of events like the Las Vegas attack. But I suggest that a confession of our inherent depravity might not be a disastrous thing.

If people are basically good and getting better all the time, then events such as Las Vegas, though they are happening constantly all over the world, are anomalous, inexplicable; their perpetrators might as well be members of an alien species. We put the perps at a fantastical distance from ourselves and make such events impossible to understand. We tell one another that we could never do something like that, and then cannot possibly understand how it happens, and why it's happening again today, and today, and today.

Edwards didn't actually think we could improve, not by our own efforts. It will, after all, be us who are trying to do the improvement. The program of improvement will be run by dishonest, self-serving, potentially murderous people. The Puritans thought that we could only be improved by God's arbitrary grace, “arbitrary” in the sense of being something that we definitely don’t deserve. And I'll go this far with them: a beginning on making things better, perhaps the only possible beginning, is to humble ourselves, and realize that we won’t be redeemed by our own efforts, because they will be our efforts.

We might also conclude that we shouldn’t trust anyone with power, but I'll leave that theme for another day.