In Praise of the 242nd Street Station 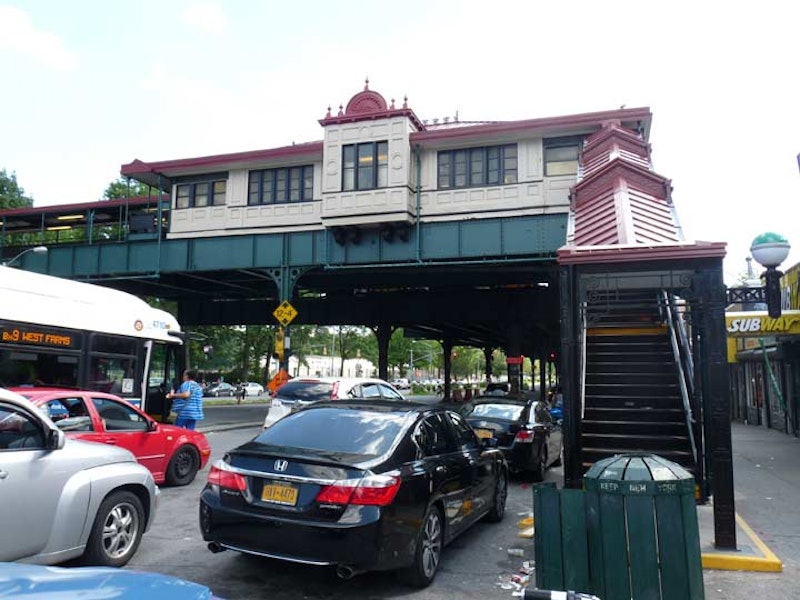 Way up at the northern end of the #1 train is one of my favorite elevated train stations in the city, not only because of its physical characteristics but because of where it takes you. The 242nd Street Station leaves you at Broadway at the west end of Van Cortlandt Park, one of the great hiking and running parks in the city. There’s a colonial-era mansion, challenging hills, one of the city’s foremost running tacks, and a huge lawn—one of the city’s largest public curated lawns—that also hosts football, soccer, and volleyball fields. I’ve often ridden up here on a crisp October Saturday (remember when Octobers featured crisp, cool weather in NYC?) and witnessed differently uniformed running clubs, football teams, cricketers, all assembled on the huge Van Cortlandt Park field.

Riverdale itself is a very hilly district dominated by Manhattan College, occasionally ritzy streets that alternate with gas stations and diners; north of here is a semiprivate landmarked district called Fieldston. In the 1930s, Robert Moses bisected the community by bruiting the Henry Hudson Parkway through it. 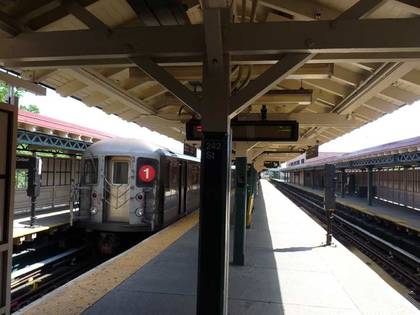 The 242nd Street Station, opened on August 1, 1908, features both island platforms and side platforms. This is unusual, because the #1 train does not have express service north of the 96th Street station; it’s possible that the station architects left open the possibility of express service, though the line features only one pair of tracks on the intermediate stations. The platforms are quite long because crew quarters are located on the south side of the station that have an unusual twist, which I’ll get to  a bit later. 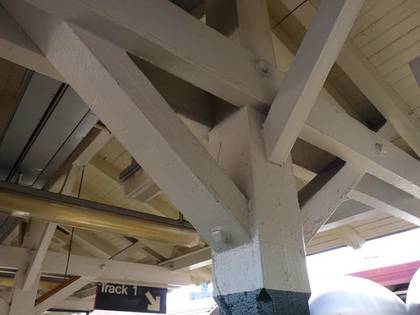 Unlike most  surviving elevated stations around town built a bit later on in the 1915-1920 era, which seem built from the same erector set model, the 242nd Street center platform canopy is unique to the system, with wooden, crosstimbered pillars. In 1908, the 242nd Street station was in a much more suburban location than now; Van Cortlandt Park was founded in the 1890s, but the fast food joints on the west side of Broadway was a few decades in the future. 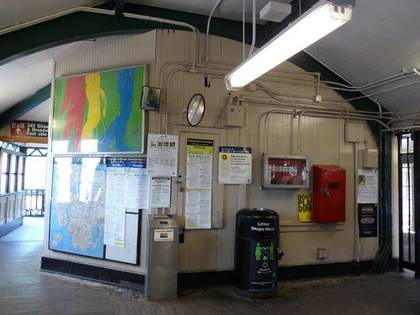 The station itself, as you see in the title picture, was built to look like a mountain chalet, as the other elevated stations on this line were. I wouldn’t be surprised to hear that a pot belly stove (the kind still in use in McSorley’s, versions of which I have seen in photos of the old 3rd Avenue El stations) had been in use here. Its plank floors survive, and there is no escalator access to this relatively high station. Your blood pressure will lower considerably as you climb the two tiers of steps to access this station. 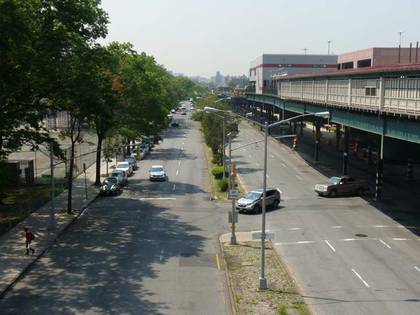 At 242nd Street, Broadway (which has been reduced to a pedestrian walkway in some areas in Manhattan) lives up to its name as it expands to six lanes. As Route 9, it will continue north almost all the way to the Canadian border. The elevated train only covers a portion of Broadway at the 242nd Street station. 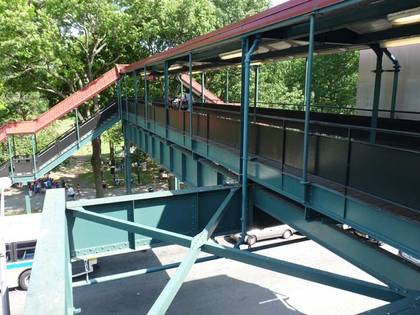 Hence, station architects built an iron bridge crossing Broadway, allowing access to not only the park but also a number of northbound bus lines heading for Yonkers and points north. In years past, this was a trolley transfer station. A view of Broadway, showing it as seemingly endless and stretching into infinity, is available in both directions from the bridge. A similar iron bridge allows passengers to cross the Grand Central Parkway with a view of the Triboro Bridge at the Astoria station serving the N train. 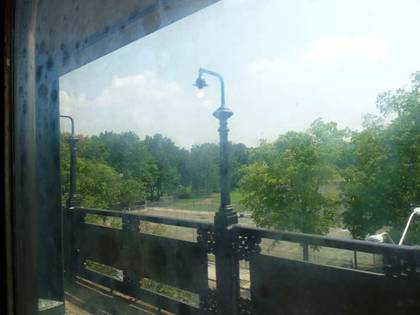 Before leaving the station, I want to point out an anomaly on its southern end. On the side platform, accessible only by authorized personnel, is the crew quarters. Here the platforms are lit by original lamp stanchions carrying incandescent bulbs, some of which dayburn and a few of which still carry their original reflector screens. The humble passenger can only get a fleeting view of these relics, but the train is pulling into the station slowly, a photograph through the streaked windows can be taken, as seen here; views are also possible from the street with a zoom lens.

In recent years, posts that copy this design have been installed on the Manhattan-bound platform of the Dyckman Street station to the south of here, but these are the 1908 originals. 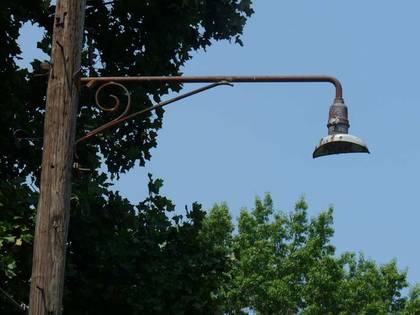 It’s not a route most people take when heading into Van Cortlandt Park, but I always use a rutted road now overgrown by plants and grass heading east past barbecue pits in one of the few park spots where grilling meat is permitted. Long ago, this was once a vehicular route enabling park vehicles to get to the Van Cortlandt Park golf course and clubhouse. The telephone poles along this barely-recognizable trace still bear posts that used to hold incandescent lamps, a couple of them still with crescent moon reflector covers. 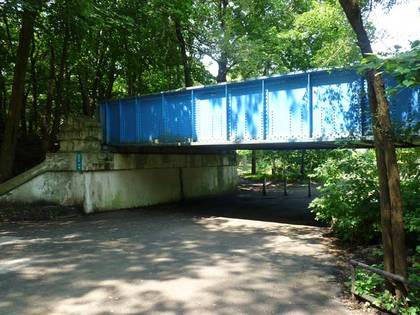 This road heads toward a steel bridge that carries a running and bike trail, while its concrete abutments bear the date 1904. This is the former path of the Putnam Branch of the New York Central Railroad, which was still running freight business up to 1980; its passenger service ended in 1958. The skeletal structure of the Van Cortlandt Park station is still in place, as are thirteen stone stanchions used to test materials to be used for the second Grand Central Terminal, completed in 1913. In the end, the cheapest variety was employed.

The trail itself leads deep into the park end extends north into Yonkers and beyond.