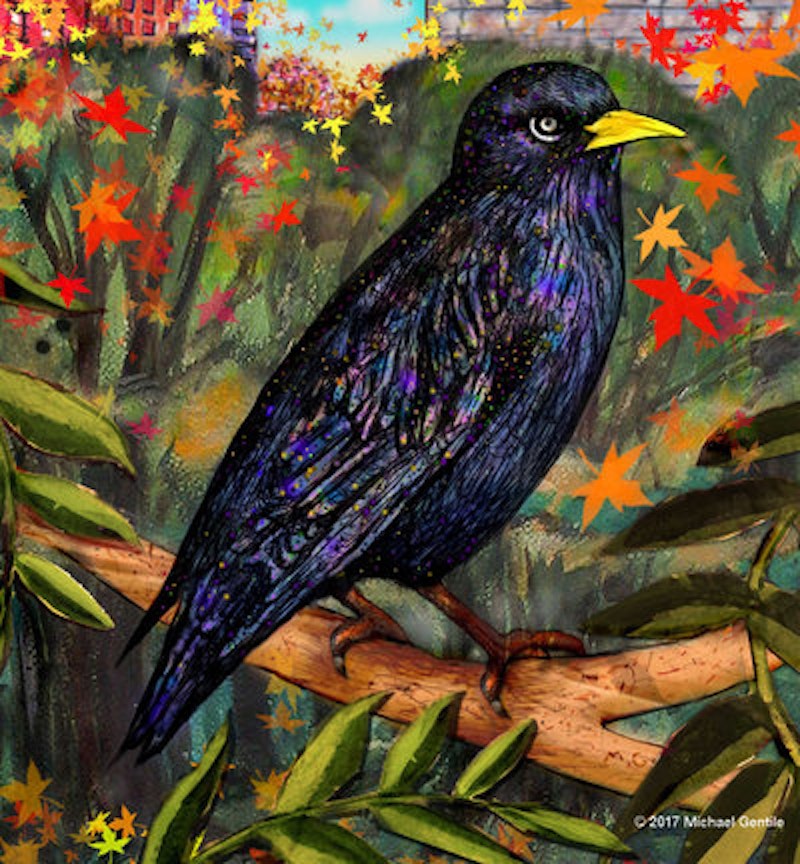 The shorter days of autumn in the Northeast have a robin uneasy. His little brown head bobs, twists and blinks with an increased pace. That’s a signal to other seasonal birds, “time to head south.” Staring around, those sharp eyes can’t help but notice one bird ignoring the nervous warning. This loitering dark, reviled creature is busy eating a second grader’s dropped cupcake. With a bad reputation for fatalities and economic losses, the despised species is often referred to as a bird-haters favorite: Sturnus vulgaris, the common European starling.

When the ornithologist Mrs. Bundy in Alfred Hitchcock’s masterpiece The Birds bluntly says, “I hardly think a few birds are going to bring about the end of the world,” Tippi Hedren as Melanie Daniels evenly responds, “These weren’t a few birds.” Bird count estimates are problematic for a simple reason: they fly around a lot. Recent data indicates the US starling population clocks in around 200 million.

There are animals that don’t get a fair shake. My thoughts about the maligned bird’s appeal have changed since I was a kid; they were my backyard “go-to” chase bird. So why are starlings, the third most abundant bird in North America (behind the Mourning Dove and the American Robin) so disliked, often killed and not embraced for their beauty?

Let’s take a look at the starling’s dressed down, cool and understated attire: a crisp, pointy yellow bill matches glossy, dark plumage speckled with green and purple iridescent spots. The bird’s range covers all 50 states in urban and rural landscapes.

One man is indirectly responsible for the starlings’ presence in the US: William Shakespeare. At the end of the 19th century, a wealthy, eccentric bird-lover Eugene Schieffelin had a plan. He was inspired to bring every bird mentioned in Shakespeare’s works (the starling was only mentioned once) to Central Park, which he did. On March 6,1890, Schieffelin released 60 European starlings into New York City’s skies. Today’s birds are direct descendants.

Schieffelin’s actions proved unwise and costly. Non-indigenous species began flourishing throughout the country. The nation’s first conservation law, The Lacey Act of 1900, was passed and banned further importation of non-native animals and plants—too late for the starlings.

Nobody likes a show-off, but starlings love to create a spectacle. The numbers are overwhelming, tens of thousands of birds will gather in murmurations. The sight of a dark swath of birds flying in synchronicity, swooping and swirling through the sky is incredible. The group flies as one, an achievement that remains a mystery.

Just imagine one of those flocks getting sucked into a jet engine of a commercial airliner. It happened in 1960 to flight 375 out of Boston resulting in 62 deaths. However, most bird strikes are credited to wild fowl with only about six percent involving starlings and blackbirds.

Dirty bird is the word: starlings are massive poopers. In urban areas, bird sanitation can often be difficult with its numerous hard surfaces. Health hazards arise from droppings with potential pathogens and diseases. The aggressive eater starling is an omnivore. On the daily menu, a diet will include lots of bugs and insects. Someone’s got to eat weevils and stink bugs. That task alone makes the bird a beneficial asset.

Starlings love to talk. Their favorite conversation time is dusk. The bird’s mimicries are a constant symphony of chit-chat, whirrs and whistles. Just like their fellow cousin mynah birds, they’re incredible copycats and can mimic human speech. Because of this special trait, starlings have a long history of being pets dating back to Greek and Roman days. Mozart had a starling that could sing his Piano Concerto in G Major and he held a funeral for the bird when it died. Lyanda Lynn Haupt’s book Mozart’s Starling is a delightful read that chronicles that unlikely pair and the writer’s experience raising a starling.

Is killing the bird an answer? Starlings are not pioneers in the “farm to table” movement. Farmers dislike the bird for their agricultural losses and damages, so much so they use a targeted toxic pesticide called Starlicide. In fact, the controversial poison’s been in use since the 1960s, a trademark and brand of Purina Mills, a company committed to helping animals reach their full potential. Panic everyone! That's what happens when citizens see dead birds dropping from the sky en masse. Another questionable strategy is the USDA’s Wildlife Services attempt to shoot, poison and trap millions of starlings with mixed results. The birds returned.

Recent indications show the US and world starling population dwindling. Nature changes and man needs nature. Maybe it’s time to give this misunderstood troublemaker another look. We should consider the benefits starlings provide minimizing problems with positive interaction, rather than seeing them as a threat and using extermination as the answer. Studies show looking at birds after surgery improves recovery time. The starling’s tale of biodiversity serves as a parallel to today’s greater dangers from technology: smartphone addiction and the proliferation of “attention economics.” We’re not in control of things as much as we think. That’s a discomforting thought with an unknown outcome, and a whole other story.

As autumn’s breeze whisks away fallen leaves like pinwheels, there’s a sense of peace when summer dies. Robins, bees and butterflies will soon disappear, but the starling remains for now. Rachel L. Carson considered the starling for citizenship papers in a 1939 issue of Nature Magazine when she wrote, “the starling is here to stay.” And stay it did.