My empathy petered out at the gender border. 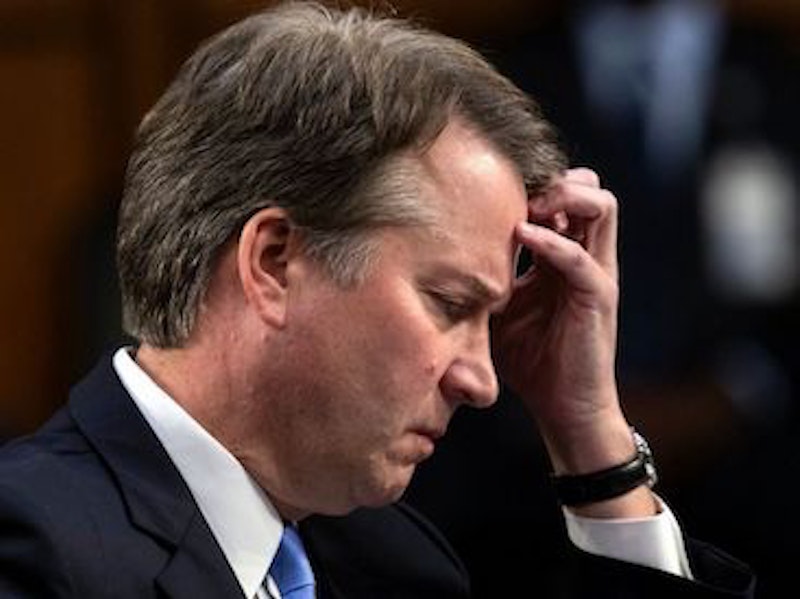 One thing I have to do is just shut up for a minute, which is hard for people like me. I'm a 60-year-old man who has a lot of practice forming and stating opinions, who takes for granted my right to be heard. I do have a right to speak, but maybe I also have an obligation to listen, an obligation I’ve obviously failed to discharge. Or perhaps I've listened, but not in the right way.

My initial response to the accusation against Brett Kavanaugh by Christine Blasey Ford was: A drunken high school party? Are you kidding me? That's disqualifying? And my immediate reaction to various bits of #MeToo as they’ve emerged has been gender-defensive and strangely dismissive. Like: they just exposed the casting couch? Whatevs. Or: it's odd to talk about grabbing people by the pussy; I never heard that one before. But I've heard plenty of locker-room yapping. So what? Or: sure Louis C.K. should be performing. Why not? How much of a price do you want him to pay and for how long?

What surprised me at first and is settling into a pattern is that as I start thinking about it more, my own response seems wrong in various ways. Now, maybe Louis C.K. should be performing if he wants to be or if people are buying tickets. But my initial reactions are almost uniformly dismissive or even defensive, and they take the form of identifying with the perpetrator. (I don’t believe I've ever done anything like what these guys are accused of, but my interpretations could be part of this pattern too.) And they come from a set of attitudes—inculcated, as it were, from birth—in which I think about women's experiences as being very different than men's.

As a teenager, I was sexually harassed by several gay men, including my (bisexual?) step-brother. I didn't tell anyone about this for many years, and the first person I told was a therapist. I thought this was intolerable. It filled me with rage and shame, and it fed a nascent homophobia. It was obvious that many of the girls around me were undergoing the same thing at the hands of older heterosexual men. In fact, looking back on it, the life of a teenage girl in the 1970s was a gauntlet: no place where you might not be cat-called, no man of any age that might not suddenly try to corner you. It was happening all the time, and it wasn't something you could miss unless you were really trying.

But in my head it was not the same thing that was happening to me. I shouldn’t have to put up with this bullshit, I told myself. But they're girls. Basically that's what they're for, and plus they're irresistible. They're going to have to expect that, even if it's wrong. Maybe they enjoy all the attention; look at how they dress or how provocatively they walk. My empathy petered out at the gender border; I supposed that female experience was kind of incomprehensible. I didn't think much about what negotiating this world bristling with sexual attention and attack would’ve been like from the inside, even though I could’ve. For one thing, they were telling me about it.

A number of girls I knew were raped or seriously sexually assaulted when I was in high school, some of them at parties. Some appeared to dismiss it, almost laugh it off or pretend it never happened. For others, it was an immediate life-changing experience or sent them into crises of various kinds, including in one case a suicide attempt.

As I got into my 20s, I knew a number of women, including two I dated and one I married, for whom rapes and attempted rapes had been formative experiences with regard to sex, love, trust and life. Some tried to dismiss the event at the time as no big deal. But no matter how they responded initially, they often needed years of work on the consequences and still hadn't made their peace, not only with what had happened, but with sex, men, trust and self-image.

Drunk or sober, what Kavanaugh allegedly did to Ford (I believe her), might not have been that memorable to him or his friends; perhaps he told himself it was just a stupid drunken pass of the sort that could happen at any party. Or perhaps it wasn’t that memorable because he didn’t want to remember it, and lived in a world where no one was going to confront him with it. But for her it was a fundamental experience that has affected all the aspects of her life ever since. There may be almost no situation in which she doesn't see the possibility of being victimized, no situation in which she feels fully safe. What's happening to her now is surely confirming her in that feeling.

I’ve had a lot to learn since 1978, and have really tried. But I still have the autonomic response of a man my age: to minimize, dismiss, or use various nuances to excuse or at least temper the condemnation. All this time, I’ve had to keep working toward thinking of women as subjects like myself, or put myself in the shoes of someone like Ford, despite the fact that she’s in this respect like many of the people I've known best or loved most.

That's why I don't try to write the morning after the revelations emerge, which has saved me a bit from being terribly stupid and wrong. I almost dashed off that "high-school-are-you-kidding-me" column. It amazes me how thoroughly the gender norms of my era or before were installed in my head, how destructive they are to everyone, and how difficult it is to work my way out. I'd like to get to the point where I can trust my responses on this as I do on most other issues.

The question for me is not whether or how I speak, but whether and how I listen. Alright, I'm shutting up now for real.