A Bit of Bay Ridge

I shouldn’t remember the neighborhood as fondly as I do. 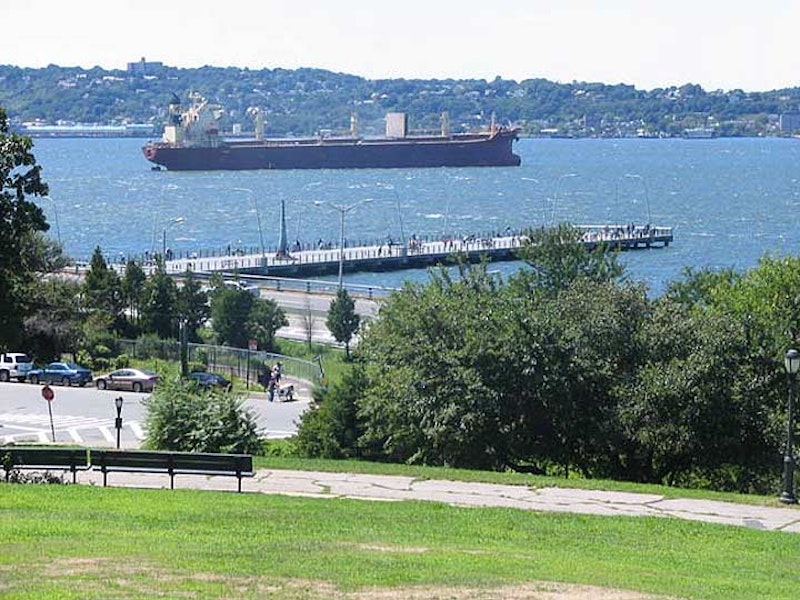 That might sound funny coming from Kevin Walsh, who hasn’t lived in Bay Ridge since 1993, and whose only real-life connection to the old neighborhood is my dentist, whose office is on 4th Ave. and 75th St. (for non Bay Ridgers, Bay Ridge Parkway). I frequently go back, however, and recently chose one of the more gorgeous days of the year to stroll along the pedestrian walkway along the water from Owls Head Park to about 80th St., taking in the waterfront views, as well as the remaining Shore Road mansions. I’m a nostalgist, and remember the past, with both disgust and delight. 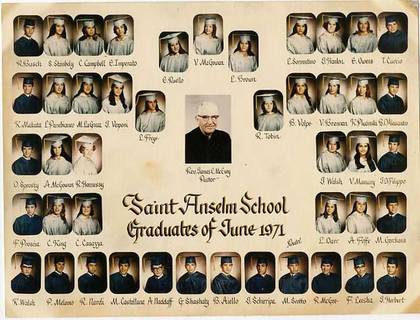 Where’s Walsho? Spot your webmaster in this composite 1971 class photo. Suzanne Stonbely, top row second from left, is a prominent clinical social worker in South Beach, Miami, Florida, while Joe Herbert, bottom row right, is a detective who helped catch a serial killer in the 1990s.

I shouldn’t remember Bay Ridge as fondly as I do. In St. Anselm’s grade school, where much of my pre-teen years were spent, I was despised by many classmates as well as many of the teachers; I still hold dear the date of June 17, 1971, the day I escaped the place; and I’ve never set foot in the building again. The year I graduated, I asked my eighth-grade teacher, a 75-year-old crone of a nun for whom the school’s basement rec room is unaccountably named, for something or other one day and received this response: “I wouldn’t give you the time of day.”

By the 1980s I endured Bay Ridge’s horrific commute time to jobs in Manhattan; for much of the 1990s, there was no express subway service, nor was there any Manhattan Bridge service, meaning it took about an hour and 20 minutes to get to work by subway. (Sometimes I just took the express bus, which was $4 each way then.) I did better when I worked nights in the 80s and caught the train home at three-four a.m.

Even before conceiving of FNY, though, I recognized Bay Ridge as a NYC treasure; its water views, unusual architecture, unexpected hills, and bits and pieces of American history such as the Church of the Generals (at which Robert E. Lee and Stonewall Jackson were vestrymen), Fort Hamilton, the Verrazano-Narrows Bridge, and the colonial-era Barkaloo Cemetery on Narrows Ave. all contributed to a feeling that I lived somewhere special and that opinion has not dimmed despite my move to Queens to be closer to a job in Long Island.

The above photo was taken from Owl’s Head park and looks down on the former ferry pier. Ferry service to St. George, Staten Island across the Narrows was ended one day after the Verrazano-Narrows Bridge opened in November 1964.

The Narrows is the strait that separates Upper and Lower New York Bays, as well as Brooklyn and Staten Island. It’s not that narrow, however, and when the Verrazano-Narrows Bridge was built from 1959-1964 it was the longest suspension bridge in the world at the time; it has been surpassed several times since then, of course.

Owls Head Park is Bay Ridge’s largest public park, stretching between the Belt Parkway, Colonial Rd. and 68th St., and its high hill provides a prime viewing spot during Brooklyn’s occasional tall ship parades. The park was created from the estate of Eliphalet Bliss (1836-1903). In 1867 he founded the machine shops that became the E. W. Bliss Company and the United States Projectile Company, concerns that at his death employed 1300 men. Bliss’ interests developed along two lines: the manufacture of tools, presses, and dies for use in sheet metal work, and the manufacture of shells and projectiles. His estate, Owls Head, possibly named because the promontory on which it was located resembled an owl’s head (or because there may have been stone owls’ heads on the gateposts), featured an observatory known as the Bayard Tower.

Bliss had purchased the estate from US State Senator, US Representative, Mayor of Brooklyn, and Brooklyn Eagle founder Henry Murphy (1810-1882). Bliss willed the estate to NYC provided it was used for parkland. The park, still known by old-timers as Bliss Park, has been in use by local residents since the 1920s; Robert Moses redesigned it in the 1930s. The mansion and tower were razed in 1940. Senator St. is named for Murphy, while one-block Bliss Terrace was named for the industrialist. 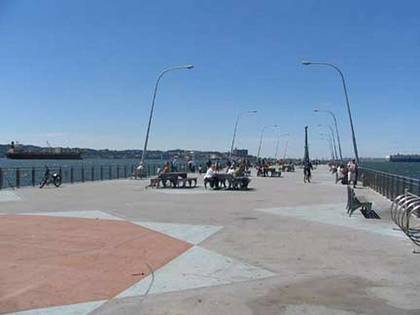 American Veterans Memorial Pier, west end of Bay Ridge Avenue (69th St. was built several years after the old ferry pier gradually rotted and fell apart. In recent years, ferry service to Manhattan has been instituted during morning and evening weekdays, but service to Staten Island has never come back.

Bay Ridge’s 9/11 memorial is located on the pier. Soaring 25 feet in the air, the “Beacon” memorial is shaped like a speaking trumpet. The device was once used by the volunteer fire brigades of New York City to transmit warnings to the crowd, and orders to firefighters, while also alerting neighbors of a crisis in progress. Made of bronze, the memorial features a beacon of light shining from the top is illuminated from 9-11 p.m. daily. 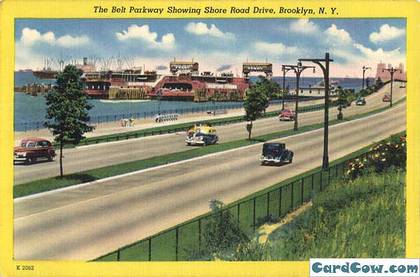 The Belt Parkway, aka Shore Parkway, aka the Circumferential Parkway, aka Leif Ericson Dr., was first proposed by NYC traffic czar Robert Moses in 1930 and, since in those days what Moses wanted Moses got, the parkway began construction in 1934 and was completed in 1940. The photos above and below show the parkway in roughly the same spot from different angles.

The “woodie” lampposts shown above were a feature of all Moses’ parkways on Long Island and the city until the 1970s, when they began to be phased out. Today, just one remains in New York City: on a westbound entrance ramp where the Belt meets the Laurelton Parkway in eastern Queens. The original 69th St. Ferry to Staten Island can be seen in the background. 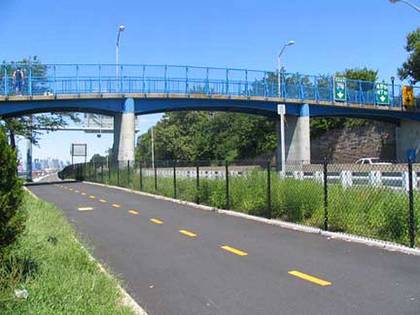 One of Moses’ legacies was the construction of three very handsome pedestrian bridges crossing the Belt Parkway in Bay Ridge and Bensonhurst: one at about 80th St., pictured here, another at about Ridge Bldv., and a third at 17th Ave.

These bridges, built in the late-1930s, were probably among the last significant structures in NYC that employed decorative scrollwork. In the 1930s more streamlined Art Moderne styles took over, and decorative elements like this were shelved in favor of stark, unadorned utilitarian styles; pedestrian walkways built today are strictly no-frills, boring stuff. These three bridges should be landmarked. 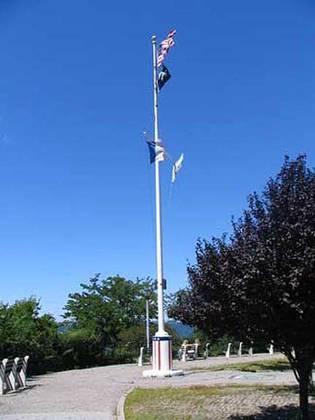 Crossing the parkway over the bridge, we find Old Glory Lookout, a tall flagpole and a tablet “erected by the citizens and school children of Bay Ridge and Fort Hamilton September 28th, 1899 in honor of the homecoming of Admiral George Dewey, USN, after his victory in Manilla [sic] Bay, May 1st, 1898.”

“Homecoming” refers to Dewey’s return to the USA after a year in the Philippines: on April 24, 1898, word was received that The US and Spain were at war. The Asiatic Squadron was ordered by the British to leave Hong Kong. It first moved 30 miles north to Mirs Bayon the Chinese coast and on the 27th departed for the Philippines. Dewey and his fleet reached Manila Bay on the evening of April 30, and defeated the Spanish fleet there the following day.

Following the Battle of Manila Bay/Cavite, Dewey fever swept across the United States. He was promoted to Rear-Admiral in mid-May. With the Spanish fleet destroyed, Dewey’s Asiatic Squadron blockaded Manila and awaited the arrival of the American army, the first units of which arrived at the end of June. Manila surrendered on August 15, 1898, two days after the United States signed an Armistice with Spain. During the remainder of Dewey’s stay in the Philippines, the Navy played a relatively minor part in suppressing the Filipino uprising against the American occupation, which came to be known as the “Philippine American War.” 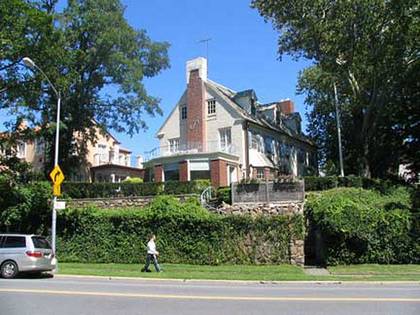 Shore Rd. is as old as Bay Ridge itself. The neighborhood was originally a country resort for Manhattan financiers and bigwigs in the early to mid-1800s; its remoteness made it bucolic, but its wonderful water views made it catnip for those who could afford to build massive mansions by the water. Shore Rd. shows up in its undulating, curving route, following the shoreline, as early as 1870s maps.

Changes came in the 1940s after the Belt Parkway and accompanying landfill moved Shore Rd. away from the actual shore. Many of the old mansions disappeared to be replaced by high-rise apartment buildings. However, around 80th-82nd Sts., some of the flavor of the past is preserved, with opulent private homes, both new and old. 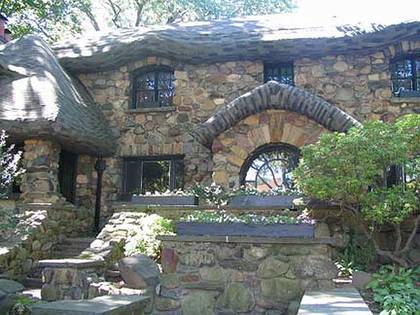 You can’t profile this area in Brooklyn without mentioning the Howard and Jessie Jones House, known popularly as the Gingerbread House, 8220 Narrows Ave. at 83rd St. It was constructed by J. Sarsfield Kennedy for the titular owners from 1916-1917; Kennedy also designed Long Island country homes, as well as the Prospect Park Picnic House and the Fort Hamilton Park War Memorial elsewhere in Bay Ridge. Kennedy is also a member of the National Lacrosse Hall of Fame. It’s alternately described as “Black Forest Art Nouveaux” or Arts & Crafts, an architectural/artistic genre championed by William Morris, Frank Lloyd Wright, and Oscar Wilde.

The house “has a bowling alley in the basement and a revolving garage door. It has been for sale for several years. If you can cough up between $10 and $12 million, the Gingerbread House can be yours.