Shake it baby. Shake that thing. 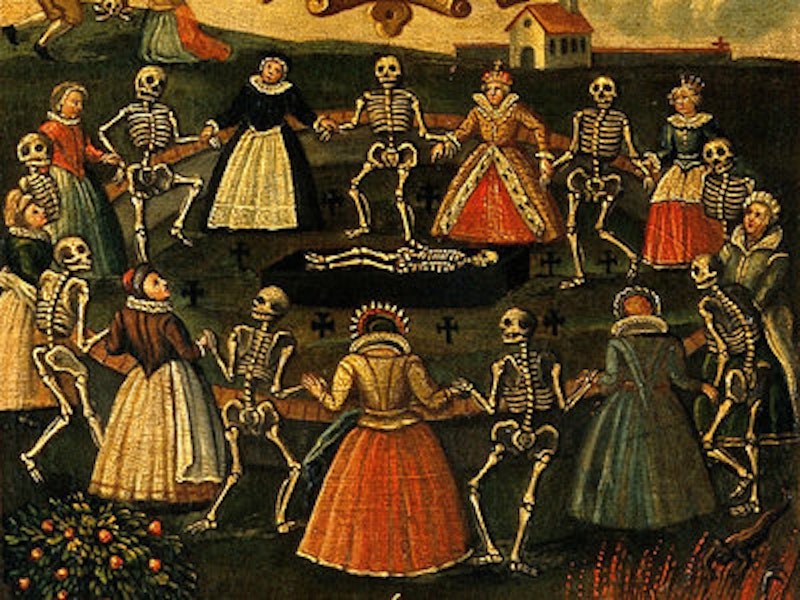 I've always embraced death with dumbstruck awe and a sense of humor. Accepting its kinship as a personal lifestyle choice. A coping mechanism in line with the insane futility of modern day survival. A slow dance to the bittersweet grand show-stopper big finish. A soft-shoe tap dance funeral march. At other moments a frantic frenzy of blurry high speed dance moves spinning on your head like a top. I've never been much of a dancer. I imagine I sing and play music to compensate for lack of cutting some rug, or burning up floorboards with fancy footwork. Some might say I’m not much on vocal talents either.

I don’t hold much stock in the critical opinions of others, including my own. It depends on how you view It, albeit part of an exquisite dance. There's this dance of life too, a morbid simpatico symphony for life, death, and the judgment of gods and demons in music and songs. The Danse Macabre appeared as a fresco on the arcade wall of the charnel house in the original cemetery of Paris circa 1424. The mural depicts dancing skeletal corpses prancing. Taking the lead in a conga line with men from various social strata of life, a pope, a king, on down to the working stiff and the peasant pauper. The highest to the lowest doing a morbid mambo in equality to their graves. Not so much a cautionary tale but more a farcical fact of existence.

I was a regular at the Friday night CYO dances. Sneaking in booze, checking out the rock bands and watching the girls on the dance floor from the sidelines. Sitting on those metal folding chairs with other awkward, shy, pimply-cheeked boys who were afraid to boogie with the girls and needed liquid courage to get out there and shake it. It was bubble gum pop at the teeny bopper hop.

CYO stands for Christian Youth Organization. The only thing that fit me was the youth part. Far from Christian and avoiding anything organized was and remains my standard protocol. It was the late-1960s. “Make Love Not War” and “Peace Now” were the chants of the day. There was a memorable night a few years later at Saint Anthony's CYO, basically a basketball court during the week transformed into a dance hall on the weekend. I was there with my old hood cohort Mike. We were scoping out the girls and dreaming of make out sessions with a hot dancer in a dark corner behind the bleachers. Looking for third base or a home run. Some dreamy easy action for raging hormones and testosterone-driven fantasies. A silly sex and baseball paradox.

Dancing and baseball was not on our list for party fun. Our dance card was wide open while trying to appear cool smoking cigarettes, sipping beers and pints of hard stuff, scheming about heavy petting with the cute blonde in a mini skirt. We were freaky wallflowers in a dimly lit gymnasium festooned with banners, balloons and the requisite mirror ball spinning in dizzy mid–air. It was enough to make any red-bloodied teen hot to trot. Then the slow dance love song “Hello It’s Me” by Todd Rundgren began to play and a cute girl in hip huggers and a skinny rib top approached and asked me to dance. I was shocked and embarrassed simultaneously and broke into a cold sweat. I don’t remember what I said but I’m sure it was cruel because she burst into tears and ran away. I felt so guilty that I found her and meekly apologized for my stupid macho act. She became my high school sweetheart. The dance of life is always on, and we’re slaves to the rhythm.

It's always Emily alone in her room with Led Zeppelin rocking and twirling. Gazing from her window at the thrill of it all. Morticia and Gomez Addams clenching black roses tween their teeth doing a crazy tango. Some kid in the dark corner of your mind banging his tambourine. In the original song, “Mr. Tambourine Man,” there's no tambourine.

Sex Pistols ringing through the wires. Airwaves travel brain waves across oceans of noise. There's absolutely no reason the Ramones have to do anything but dance. Elvis has become the building. Take the A train of rhythm and blues to the end of the line. Play the score note for note on the sound stage of your garage band docudrama. Driven by electric romance and screaming freedom's cry of love.

Let’s dance like an Egyptian doing the rock lobster with a googamuck, frug, watusi, jerk, mash potato, pony, twisting in the wind. Turn it down. I'm doing my own thing. I can’t hear a damn thing. I’m too busy twerking. You do the Freddy with The Monkees. Crank it up. All the way to Memphis dancing in our graves. Maybe it's as simple as the Beatles and the Stones. And that's okay. Shake it baby. Shake that thing.