Bidding adieu to an exploitative genre of writing. 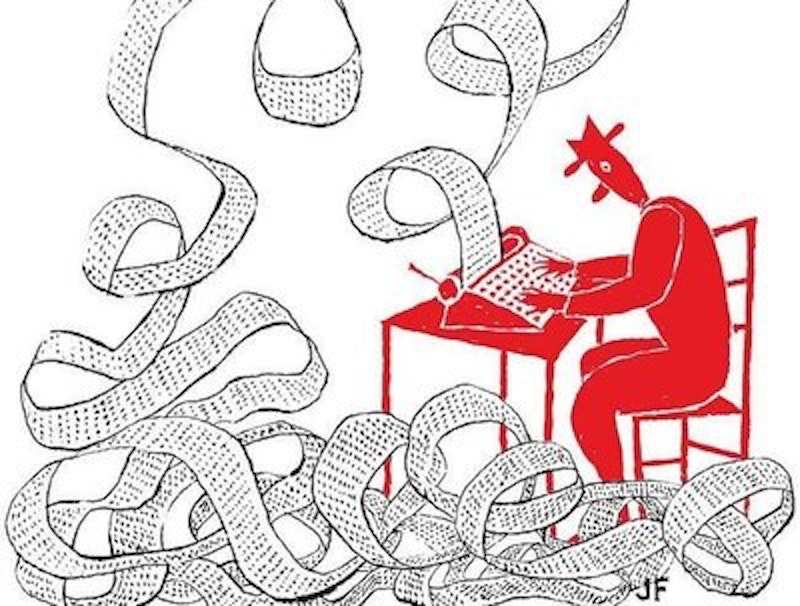 Ah, memories. I have some of those: a few good ones, a couple of medium ones, and a bunch of bad ones. The bad ones are what I prefer to dwell on, particularly when I’m around editors who might be interested in paying big money ($400-plus) for extremely exploitative “personal essays."

One thing I’ve learned over the years is that it’s better to tell semi-fictional (i.e., “creative nonfiction”) sob stories than real ones. What I like to do, given how I’ve inherited the “luck of the Irish” from my deceased and decidedly non-Irish father, is to either exaggerate or to downplay how bad things have been for me, depending on what I believe the expectations of my audience are. So if I’m before a crowd of editors looking to acquire personal essays, I’ll shoot high and go low: multiple molestations, total impoverishment, suicide attempts stacked one atop the other, years in rehab, and the rest of The Whole Nine Yards starring Matthew “Chandler Bing” Perry and the late, great Michael Clarke Duncan as the Nine Yards (note: none of that happened to me).

But if I’m in front of a bunch of well-off older professionals from my hometown who used to look down on me and my fucking family of fucking idiots, I’ll mouth some platitudes about how “I’ve struggled to get my act together” and how “my late 20s were rough but I’m in a better place now.” I might even append something about centering myself or renewing my faith if that’s what I think those people want to hear.

As a historian, or at least as a man who plays a historian at work, I’ve reached a point of no return: I’ve lost my faith in the past. Not in the people who lived in the past—they were, much like the people of today, loathsome imbeciles and sex-crazed buffoons—but in the fact that there was a past at all. Human memory is more than just faulty, pace Montaigne, it’s nonexistent. How many conversations begin with vague recollections? “Yes, Bill, how’s he doing? Does he still eat poop out of the commode? I distinctly kinda sorta may have heard about him doing that and I’d like to follow up with you regarding that anecdote.”

How fleeting and insubstantial is our engagement even with material that’s been recorded for posterity! “Oh yeah, that movie I probably saw and that I know exists out there in the world... it was kinda okay. Nothing special, but yeah, definitely a movie.”

At a certain point, you—and you meaning me, while also meaning you—need to understand that much of the time you’ve taken to speak to other humans, who are every bit as rotten and ungrateful as you, was actually less productive than pissing in the wind, because at least in that case a waste product is created. Other humans can sit across from you and utter words, but their presence, like your own, often amounts to little more than a way of killing time while waiting for something better and truer, something more momentous, to occur. In other words: you aren’t the mouth for their ears and they aren’t the mouth for yours.

“I have now understood that though it seems to men that they live by care for themselves, in truth it is love alone by which they live.” Leo Tolstoy was a sweetheart and a runny-nosed god of a writer, but he knew more about beard-growing than human nature. Men live to eat, first of all, and once they’ve discovered a consistent source of high-calorie nourishment, they sit around and watch The Big Bang Theory. What else is left? Starting a family, I guess. Children, insofar as they serve any purpose at all, anchor us to the world until such time as they can be released into the wild, whereupon they’ll relaunch the whole cycle of trying hard and failing better. But I suppose I can understand why they provide “joy” and “hope” for so many.

At least in theory, kids represent limitless possibility. Maybe this next run, your child’s doe-eyed look suggests, won’t be so goddamned stupid and painful. Maybe they’ll do the right things for the right reasons, instead of the wrong things for no reasons. Maybe people will listen to them, since there’s always a chance. Isn’t there always a chance?

I wish I’d been by my father’s side when he died. I don’t know what I would’ve said to him, but I would’ve said more to him than I did during our last real conversation, which took place over speakerphone while I was driving moot court students around Los Angeles in a white panel van. This hypothetical once-in-a-lifetime event (since dad would’ve died afterwards!) would’ve been a great closing scene for the story of my life, you see, and I could’ve jazzed it up with a little James Frey-meets-Mitch Albom hocus-pocus, thereby extracting a threadbare and emotionally bankrupt meaning from a moment that quite honestly would’ve meant little to me, given how resigned to his impending demise I already was. I’m still not over it, meaning my relationship with him, but neither am I under it. Rather, I’m in exactly the same place with it that I’d been for many years, which is to say I’m left with a firm understanding that he believed the point of his life had been to show me that there was a point to mine.

My ostensible reason for living was to come back from the trouble he caused me, and it’s now abundantly clear that I’ve come back and went. Each one of these sweet little sob stories I’ve since written for a literary magazine constitutes a fragment of the last will and testament of Oliver Bateman, a fictional character too tough to die yet still too weak to watch 30 minutes of DailyMotion footage of late-life circumcisions. So I say to you, Oliver Bateman’s Harshest Critics, exactly what I said to my classmates when my stellar GPA qualified me to deliver the baccalaureate oration: “It’s been real, it’s been fun, but it hasn’t been real fun.”