Be Careful With That Axe

I fell in love with chopping wood. 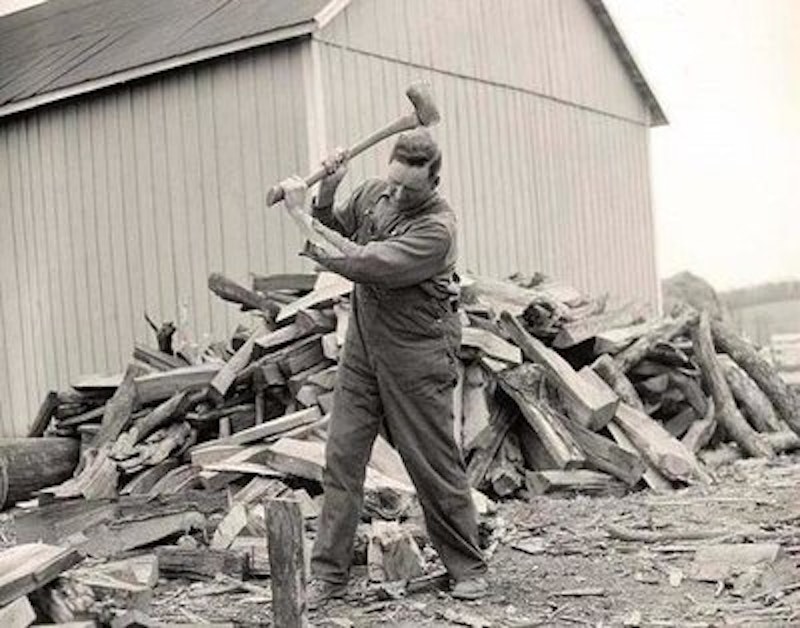 When I was living in California, I frequently expressed my admiration for Mexican culture. People would ask if I’d ever been to Mexico, and my stock response was that I don’t have to go to Mexico, Mexico is coming to me. My current fascination with Finland seems to be paying off in an unexpected way. At least this week, Finland is coming to me. As I write this, the temperature here in Gainesville, Florida is 29 degrees. It’s 37 degrees in Helsinki right now.

It’s the coldest I’ve been in a very long time, and it’s got me reminiscing about one of the more lunatic adventures of my youth. Back in 1974, in the throes of a severe case of amphetamine psychosis, I decided to hitchhike out to Priest River, Idaho in February. I was into Philip K. Dick/H.P. Lovecraft territory, haunted by demons, and figured if something was coming to get me, I might as well confront it. I had a couple of friends with a cabin up there, and at that time, meth was unavailable in rural areas. It doesn’t get more rural than Priest River. It was a good place to dry out for a while.

On Valentine’s Day, I stood at the foot of the Benjamin Franklin Bridge in Camden, NJ, dressed for a moon landing and holding a very large cardboard sign that read “IDAHO.” It was snowing. A trucker picked me up and took me as far as Phoenixville, PA, where I spent a night with some old friends. The next day, I got a ride to Chicago with a nutty trucker strung out on uppers who kept the radio on static for the entire trip, never shut up, and didn’t make the slightest bit of sense. I didn’t mind. A ride is a ride. I took a room for the night in a Holiday Inn to clear my head with a joint and a six-pack of Stroh’s and stuck my thumb out on the Eisenhower Expressway the next morning.

I got a ride to Madison, Wisconsin with a nurse who took me in. We got high and fucked all night. She advised me to take the Greyhound the rest of the way. “Every spring,” she said, “they scrape frozen hitchhikers off the side of Route 90 in Montana. You have no idea how desolate it is out there.” I took her advice, and she dropped me at the Greyhound station. It was good advice. I had no idea how empty it could get. I’d never been further west than Ann Arbor, Michigan.

When I got to Priest River, it was 29 degrees below zero. I figured the cabin would be equipped with basic modern amenities like toasters, television, and central heating. I was wrong. It was an uninsulated A-frame on stilts up the side of a mountain beside a beautiful stream with two wood stoves and kerosene lamps. The only 20th-century technology in the place was a battery-operated radio from which we could pick up a station out of Saskatchewan. It took some adjustment. My first morning there, I got up and offered to hike down the mountain to the mailbox to check the mail. I made the mistake of taking my glove off to open the metal box and promptly tore a bit of skin off my thumb and forefinger when they froze to the metal.

It didn’t get above 28 below for two weeks. We slept in our clothes and kept the fires burning, venturing outside only to fetch water from the stream, use the outhouse, or chop wood. I fell in love with chopping wood. It’s a very relaxing activity. I loved swinging the axe. We took sponge baths from a bucket. We smelled like wood smoke all the time.

Once a week we’d go into town for supplies and hit Fred Flintstone’s, a bar catering to the local loggers where you could buy a hot shower for a buck. I took to drinking Harvey Wallbangers on these visits. If I tried to drink one today, I’m sure I’d puke, but young people tend toward sugary drinks. Up at the cabin, we were drinking Boone’s Farm, and I turned the locals onto a ghetto drink from Camden called “shake-up,” which consisted of an unsweetened packet of Kool-Aid dumped into a bottle of Thunderbird, which was then shaken until thoroughly mixed. I taught the locals how to speak Ebonics.

Everything went swimmingly for a few months, and then the Posse Comitatus showed up. They were a stealth offshoot of Aryan Nations, disguised as a tax rebellion. We didn’t interact well. I caught an Amtrak back to Philadelphia, and my friends moved further north to Bonner’s Ferry.

It snowed in Florida yesterday for the first time in 29 years. If it gets any colder, I’ll be researching Finnish cuisine in anticipation of an influx of Laplanders and reindeer. Stay warm out there. I feel like swinging an axe. Maybe next week...