My Failed Attempt to Buy Weed On the 18th Hole 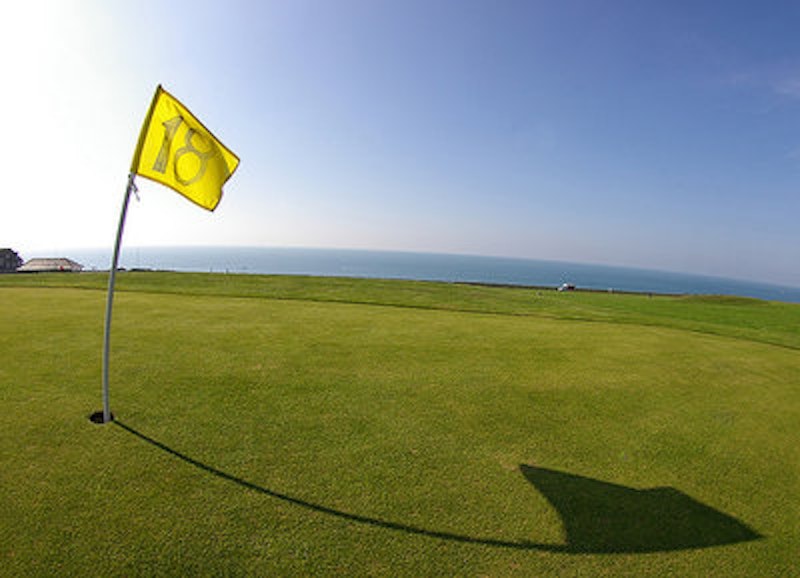 I saw my friend Michael just the other day, and we went through the usual routine. He asked when I was going to call to play golf, and I said I was busy and not playing much lately, while attempting to make those lies not so obvious. I doubt I succeeded.

It's probably a game he plays at this point, having figured out I'm not going to call him anymore. After all, he could just ask me to play next weekend and see what happens, but never does. We played golf together three times, and none of them were particularly good experiences for me. Michael’s not a good golfer, and he doesn't know any golf etiquette, which is annoying. His usual shot skims along the top of the grass for approximately 20 yards before skidding to a halt. Golfers call them worm burners. He'll also heckle you for fun as you're lining up putt, which is not acceptable.

For our final golf outing, Michael showed up at the course wearing a black "Legalize It" t-shirt, which didn’t make me particularly happy, at least at first. I'm far from a traditionalist, but at a certain point—like when you're well past 40—it's better to stop acting like a kid. Wear it to the bar. Anyway, I saw a silver lining, because on that particular day I happened to be looking to score an ounce.

It wasn't for me. A close friend I’d known since childhood was undergoing chemotherapy, and I wanted to give him marijuana to ease the brutality of that experience. Michael used to be an attorney for drug offenders (before he stopped practicing law) and his ex-clients still kept him well-supplied in weed. I thought he'd be the perfect person to ask about such a purchase, and there he was, walking 18 holes with me in that t-shirt. When I finally broached the topic on the 18th green, he was less than forthcoming. My question had obviously made him nervous. I’d explained the reasons for wanting to buy the weed, but he dodged me.

I was getting stonewalled, which enraged me. Eventually, I just walked away from Michael, and headed back to my car to get away from him. This guy who attends "Legalize It" conferences around the country and tells me all about them, but can't come through when someone is in need.

The next day Michael showed up at my house with literature on some sort of cannabis-based pellet that supposedly was useful in treating cancer. As he handed it to me, I tried to disguise my disgust. I hadn't asked for help in curing my friend's cancer. He had a crack team of doctors working on that. Plus he was facing two surgeries—a little late for cannabis treatments. I’d explained explicitly that I wanted weed, which my friend could smoke to relieve the effects of all the nasty drugs being pumped into his system. I felt like slapping the computer printouts he was offering me, but I took them and mumbled something to him. Just leave, was all I could think.

I ran into Michael a few days later and he asked if I’d read the material. I tried not to snicker in his face. Was he willing to continue this charade indefinitely just so he wouldn't have to address the request I had made of him? As it turned out, I found an alternative source. An acquaintance set me up in a deal we conducted in the parking lot of a sporting goods store. It took one quick phone call and a half a day to complete.

The weed ended up being a great help to my friend. He said it even helped him sleep, which had become a real challenge. The Virginia state legislators are too dense—or mean—to understand they have a moral obligation to make it possible to purchase marijuana in such cases, so I had to commit a criminal act to help a friend.

I ran into my friend's mom at the hospital after one of his surgeries, and she’d heard what I’d done. She expressed concern that her son would become "hooked" on weed, and I did my best to allay her fears. I wonder if she remembered that long ago, when we were teenagers, that she’d found a bag of marijuana on his bedroom floor, and had come to me and asked whether it was addictive. I gave her the same answer then, too.

As for Michael, I still can't get myself to call him for golf. I'll run into him again and it will be uncomfortable, as always. There aren’t that many times when a friendship is so directly tested, but ours was and he’d failed miserably. There was a happy ending, however, in that my friend's doctor recently declared him cancer-free, five years after his last surgery. If Michael ever asks me directly why I won't golf with him any more, I'll explain.