Trongorr the Absorber Is Voting for Trump

And so should you. 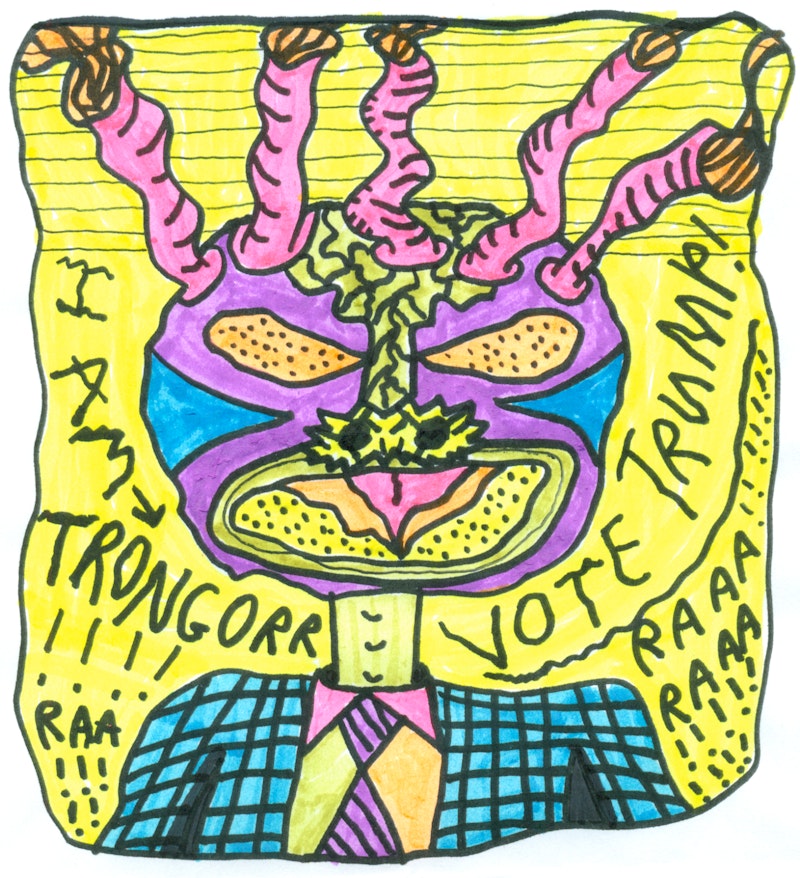 The zalmonica: a rare, prized musical instrument, a strange hybrid of a player piano and a space harmonica that runs on fuel refined from Jargoglian oil (from the planet Jargoglia, 300,000 light years away from Earth...)

Somehow nearly all of Human Host’s recordings feature zalmonica. So how did we get a hold of a zalmonica and its even rarer fuel? The answer is simple: we struck a deal with horrifying intergalactic super villain Trongorr the Absorber. Trongorr, through unknown, sketchy means, has unlimited access to the Jargoglian oil fields. Along with his own personal zalmonica, he’s given us free reign with his Jargoglian oil supply in exchange for a chance to vent his political spleen via Earth’s journalism juggernaut Splice Today.

If we refuse to honor this bargain two terrible things will happen: We'll lose our zalmonica privileges, and Trongorr will destroy our galaxy and all life in it with his diabolical atomic absorption ray.

So, for better or worse, to preserve our artistic integrity and to save the galaxy from total obliteration, we have transcribed here...

Usually when I have to talk to you unworthy ants I feel like a pile of rancid barf, but not today! No, today I’m genuinely happy to help you numbskulls greet the dawn of a new American era of greatness, a time soon to be defined by a fresh standard of perfection, a gorgeous epoch when all the powerless, exploited, oppressed, uneducated LOSERS of your dumb ass planet will soon bow in fear to an omnipotent lord—my close personal friend, one of the best golfers within 20 galaxies, and the next president of the United States of America: Donald Trump!

You see, Earth morons, me and big Donny T. go way back. The Big T first became my friend during The Blarconoid War of Golarr. Back then Donny had close ties to Thug-O-Plex, the immortal sadist crew who serve the planet by making sure that its population eternally bends to the will of all large male power brokers.

Starting wars is a common and 100% legal hobby for interstellar magnates, so D.T. Money Bags had Thug-O-Plex fire up the long standing rivalry between Golarr’s two most uranium rich city states (East Blarco and West Blarco). An open call for war mongering help then rang out through all known, unknown, real, and imaginary dimensions. Of course, I arrived as soon as I could, and who was scopin’ the scene as god-like super villains started queuing up in droves outside Thug-O-Plex H.Q. early on the first day of war councils? The God of Greed, The Hair Weave Hellion, Terror in a Toupee, Trumps’n‘a Bump! (the bump of course being his ever loving ogre pal/hate coach/body guard Burgo Wretchistan).

I’d long been an admirer of El Trumpero’s apathy for the plight of the disenfranchised, his genuine savage dedication to plutocracy and the nice ways it could benefit glorious evil and destruction. So that morning I struck up a conversation with Trumpty Dumpty, which found me and the bestial tycoon comparing notes on everything from how to make better use of remote controlled killer robots, to where to get the best deals on a recreational nudering license, to our favorite varieties of roasted peasant, to tips on dead rival taxidermy. From that moment on me and Trumpa-Doodle Doo became inseparable allies in the war against kindness and decency waging campaign after campaign against every humanitarian organization and super hero team imaginable…

Trumplestiltskin’s extreme commitment to hatred, evil, and torture truly makes him your ONLY choice for president, so if you’re like me and you absolutely NEED to live in a world where happiness can only be obtained by demonic despots who drink the shed tears and spilled blood of the less fortunate, then you know what to do.

If you really want a better America you garbage guzzling peons, you slime ravaged worms, you pus chomping urchins, for The Great Satan’s sake on November 8, 2016 just VOTE TRUMP….