Notes for the morning after. 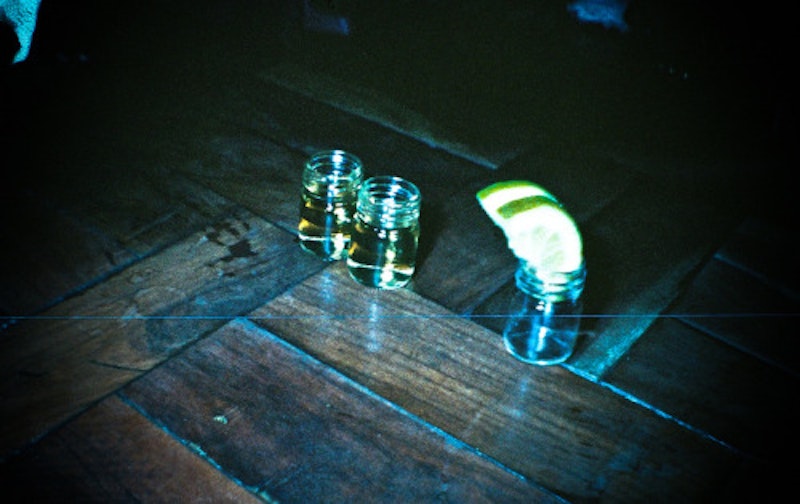 I’m driving but I really shouldn’t be. Joe’s hunched down in the seat next to me wearing a beer-stained shirt, smoking a cigarette and the music’s up too loud so I can’t hear the girls in the back but they’re laughing. One of them drove us home last night even though she’d never gotten her license and when she turned onto Falls Rd. she nearly jackknifed an oncoming semi. Still, she made it, Baltimore to Waynesboro, PA, to a shitty townhouse past the Wal-Mart, and now we’re off to some Mexican joint Joe’s been talking about all morning. It’s the day after my 21st birthday—Joe’s too.

I turn down the music and check the voicemail on my phone. It’s from my mom. Before I put the phone down I manage “Ah, fuck” and one of the girl’s asks what’s wrong.

But I’m still too fucked up to really talk so she can’t hear me and she asks again.

“My granddad’s dead!” Angry this time, not so much about my granddad, who’d been in hospice for a while, but that I’d had to talk so much so early in the morning.

There’s a student-run bar, sort of a converted cafeteria, a short walk from my apartment at the University of Swansea. The first few days after I move in I’m down there, ordering cocktails because I can. “I’ll take a martini.” The young girl on the other side of the bar looks confused. “Um, do you want anything in that?” This is unexpected. You’re the bartender, I think. I don’t even know what’s supposed to be in it. “Wh—what do you mean?”

“Oh. Um, like cranberry juice or orange juice or something?” Of course! They must do flavored martinis, too. Like an appletini. That’s a thing, right? Martini and apple juice, I’ve heard of that. “No, no. Just regular.”

She looks hesitant but fixes something up anyway. It tastes like pepper water, totally noxious, but I keep drinking it, slow, sip-by-sip. It takes me way too long to realize she’d poured me a glass of warm dry vermouth, not understanding that a martini does not come pre-mixed in a Martini & Rossi bottle.

A few weeks later, in Dublin, I order a screwdriver at a dance club sometime around midnight (that a screwdriver shouldn’t be ordered after three p.m. isn’t part of my repertoire yet).“You mean a vodka and oranges?” the bartender asks. “Americans have the dumbest fuckin’ names for everything.”

Remnants of the old party house's once fully-stocked bar: one-third a bottle of Chambourd; a remarkably-full fifth of Ouzo; an unlabeled white porcelain jug of what I can only guess is cherry brandy; a few sips of Apple Pucker; an empty fifth of Jack Daniels; an ample supply of red plastic cups and drink umbrellas; three ping-pong balls, one usable.