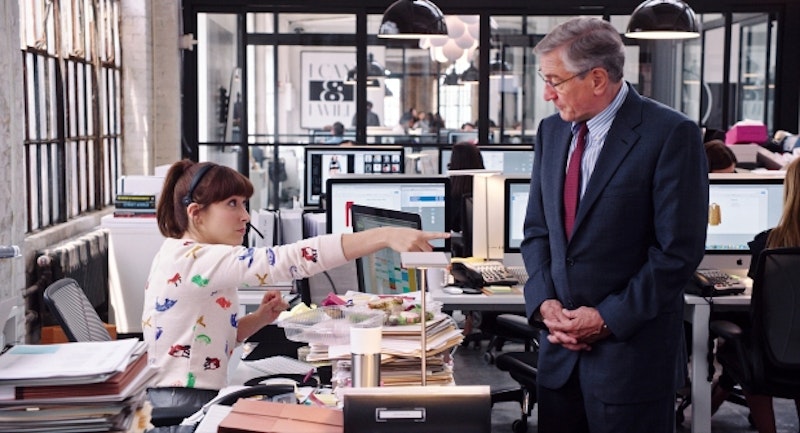 This rooster is rankled by The Intern, a new comedy written and directed by Nancy Meyers that somehow made it into thousands of movie theaters last weekend. It belongs in hospice centers and nursing homes. The Intern is spiritually annihilating, a feature-length feel-good movie that manages to be condescending and clueless to both the elderly and twentysomethings. Monica and I took a chance on a matinee and left dazed, dizzy, and hopeless—we Quibbits are suggestible. Gullible. So when we leave a theater, it takes a few hours to get out of the world we were just in. Obviously it’s not an issue when we see something good like Pawn Sacrifice, the new Bobby Fischer biopic with Tobey Maguire, although Monica was a bit nonplussed when I took apart our rotaries and fluorescents when we got home that night. I mean, who knows, the Russians and the communists could be listening to us—we may be red, but we’re not sympathizers. The Quibbits are quarreling capitalists: I’d like to see the blacklist come back, myself.

"Experience never gets old" reads the poster for The Intern, over a suspiciously chipper Robert DeNiro and that hideous Anne Hathaway, a stable escapee. I can’t stand her, so I enjoyed watching her suffer through a poor script and a story that’s suited for the twilight set. DeNiro is retired and restless, and sees a flyer for a hip new start-up in Brooklyn run by Hathaway called About the Fit. They’re running a senior citizens intern program, and DeNiro quickly befriends the overworked and ambitious Hathaway. They both teach each other lessons about life—- AGGGGAHHHH!!! Monica could hear me squawking early on, and she pecked and chided me to enjoy the movie for what it was. What, torture? This movie is soul-punishing. It’s an equal opportunity offender, with most of its jokes directed at the stunted adolescence of the start-up tech world and the quiet sadness of widowers attending three funerals a week. None of this is funny. It’s all overwhelmingly sad. Two of the three Workaholics fellows appear in this—one of them’s a cheater and the other doesn’t know how to talk to women. Oh, Millennials are so immature and ignorant! Oh, Robert DeNiro used to make phonebooks! What even is a phonebook? Can you, just, not?

Mature men shouldn’t be wearing video game t-shirts and hoodies. At the same time, Robert DeNiro shouldn’t ever have to be the butt of an erection joke. Yeah, the office masseuse rubs DeNiro’s lower back and he gets a stiffy, and the pudgy Workaholic plops a paper on his groin. Hathaway accidentally sends an email to her mom about what a bitch she is, and DeNiro and a band of boy-men have to “stage a heist” like the Oceans movie to delete the email off the mom’s computer as alarms blast. Good God, please have mercy on the people that this movie was made for—it’s trough feed, bottom barrel, scrapple, scored by awful IKEA commercial muzak that soundtracks the bowels of Hell. I think we’ll go bowling next weekend.