No mercy from the big brothers. 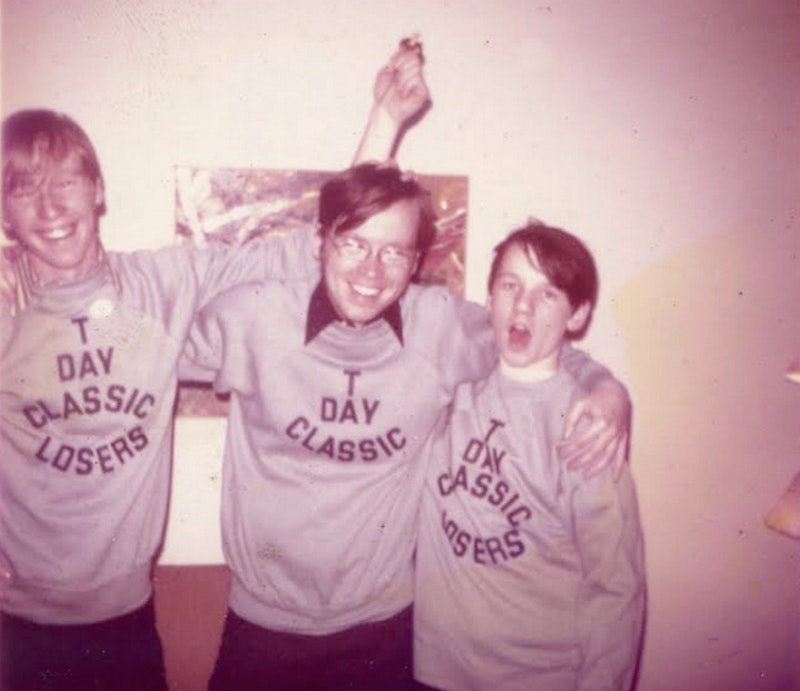 It’s beginning to look a lot like… well, no, that’s not the case. In fact, for all the annual bickering one hears about the Christmas season starting right after Independence Day, I’ve yet to see a store display getting a jumpstart. I just returned from a CVS, and there wasn’t a Rudolph or Santa in sight, not enough room one guesses, since half the store was outfitted like a candy-shock haunted house, in preparation for Halloween. Topping it all off, Jack Frost hasn’t nipped my potato nose yet.

Do you remember the holiday season of 1969? Maybe not. But the three guys in the picture above—brothers Gary and Doug, with me at 14 on the right—certainly do/did. A few weeks before this Christmas shot was snapped by our dad, the three of us had visited the Wall Whitman Mall’s Sam Goody, near Huntington, L.I., and returned with a copy of Let It Bleed, the hugely anticipated new record by the Stones. Rock ‘n’ roll moments like this are rare: needle to first track on side one, “Gimme Shelter” shot ricocheted in our playroom, the three of us with mouths agape at the out-of-his-head guitar intro by Keith Richards (his finest moment) and then Mick Jagger sharing dark, dark vocals with Merry Clayton. The song’s been used in about 1000 movies, but almost 45 years later is still fresh. I gave my son Booker a vinyl copy of Let It Bleed a few months ago—he’d only heard it on CD or YouTube—and his reaction wasn’t dissimilar to that of his dad and two uncles a long time ago. I made my peace with CDs, etc. long ago, and haven’t participated in the rush-to-vinyl niche, but this is one recording that really is superior on a turntable.

Anyway, for a few years our family had a Thanksgiving Day tradition. While my mom fussed in the kitchen (and she was tops on this holiday, although I can’t imagine eating canned cranberry sauce today, or marshmallows atop frozen squash), my four brothers and dad went down to Mill Dam Park for a pre-dinner touch football game. The rules weren’t exactly kosher: the two oldest, Randy and Jeff, against the two youngest, Gary and myself, with Doug (middle boy) floating quarter to quarter. Dad was the ref. Gary was a star athlete (as was Jeff), but he was saddled with my slow ass—I could throw and catch but was a turtle in the speed department—and in ’69, despite a spectacular comeback in the final minute, Gar and I fell short once again. Randy and Jeff razzed us—Doug, not a sports guy, just soaked up the merriment and made a few cryptic jokes—for a suitable amount of time, and then we sat down for the meal, with the “fancy” glasses on the table, and my dad carving a tremendous turkey.

Where does Christmas figure in? As you can see in the pic, Gary and I are wearing “T Day Classic Losers” sweatshirts, presents from the older boys. I’ve no idea whether it was Randy or Jeff’s idea, but credit where it’s due: back in ’69, an order like this wasn’t made with a click or two on Amazon. You had to physically find a store that manufactured such garments, and it’s not like they were ready in an hour. So this was a strategic gag, weeks in the planning. As you can see, Gary and I took it in stride, even though our mom thought it was a little over-the-top from her 27- and 24-year old sons. Doug, standing directly in front of one of his paintings, with a very ’69 dress shirt underneath his sweatshirt—the floater, he was spared the “loser” designation—was very jolly. As were we all.