Mr. Ed Was a Zebra 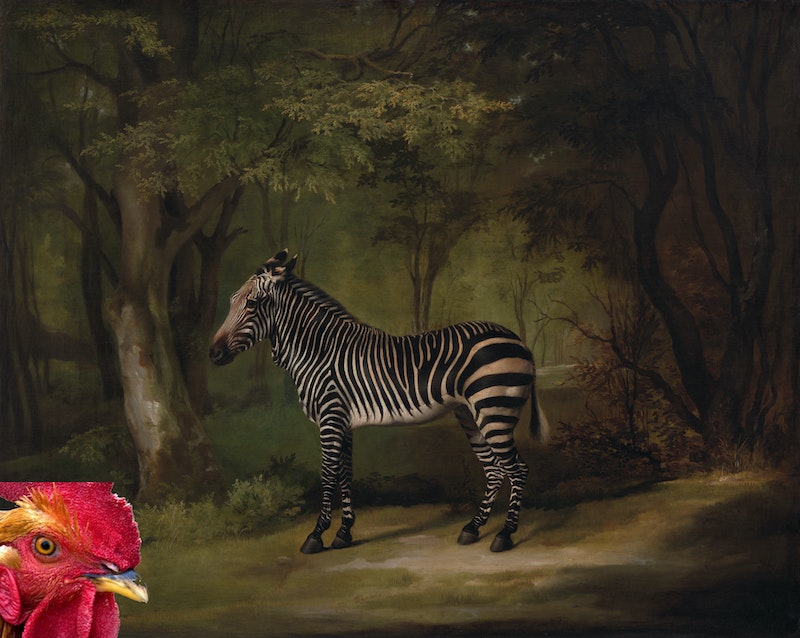 No one understands me yet everyone wants to use me. What gives? I’m not your puppet. You’re the puppet. Stupid human suits. Are you aware that I’m the nucleus of all society? I’m Walt Disney in the flesh. Google. Nike. Sam’s Club. I have shares in magma, and you think you’re big because you’re in crypto. Ha. I mean, “heh.” That’s my new thing, saying “heh.” I think it’s funny. You don’t? Please don’t challenge me; I don’t want to hurt anyone else needlessly. Most of the world looks at my wife and me as nothing more than wing, leg, and breast. Endlessly objectified before we’re deep-fried and sucked down into the guts of red-faced racists and hipster gentrifiers who insist on knowing our names before they pick our bones. I am a flightless bird, and I’m not proud.

But I’m angry. Righteous, right, yet angry still. Everyone wants a piece of me, or even worse, they claim to know my history and assume that I knew this or that person. Usually historical figures. I’m realizing now I’ve revealed too much about myself in public writings. I need to learn to separate the personal from the professional. My wife Monica is much better at that. She doesn’t even have a computer or a phone or take aspirin. She’s been getting into paleo diets and steam baths and ancient crystals and bowhunting recently, which has been nice. I like to eat raw elk, makes me feel good. I especially like when I bite into the flesh and the sinew and then all this blood runs down my beak and my feathers, makes me feel more alive. Like, wow, my wife killed this innocent creature, and now we’re eating it. Life is wild.

Russ wants to know if I was ever friends with television star Mr. Ed. For the record: no. We knew each other, sure, even worked together, but friends? No. I don’t associate with zebras, which is what he was. First of all, motherfucker couldn’t even talk, they got some fat Irish alcoholic to dub over his lines. All he did was eat peanut butter and shit in a stall all day.

I was fortunate enough to be witness to several Mr. Ed executions. You know they weren’t all the same zebra—I mean, horse right? They must’ve gone through two or three dozen of those guys during the show’s run. Some of the executions seemed a little superfluous—I mean, I get a broken leg, but his “eyes look too ethnic”? I called racism on that one, and that’s when I was fired and my career in Hollywood television ended. Listen, I was just speaking truth to power and trying to stick up for my brothers and sisters of the animal kingdom. I’m sure they continued on killing zebras for that show after I left, which is a shame because they are a hoot and a holler to be around. So bitchy, I love it.

Bennington’s calling me. I think he needs money again… I don’t want to answer… but I must. I’m an animal, and so is he. We cannot dance, but we can peck. Spur claws keep us together.