Parallels between fashion, fascism, and fission. 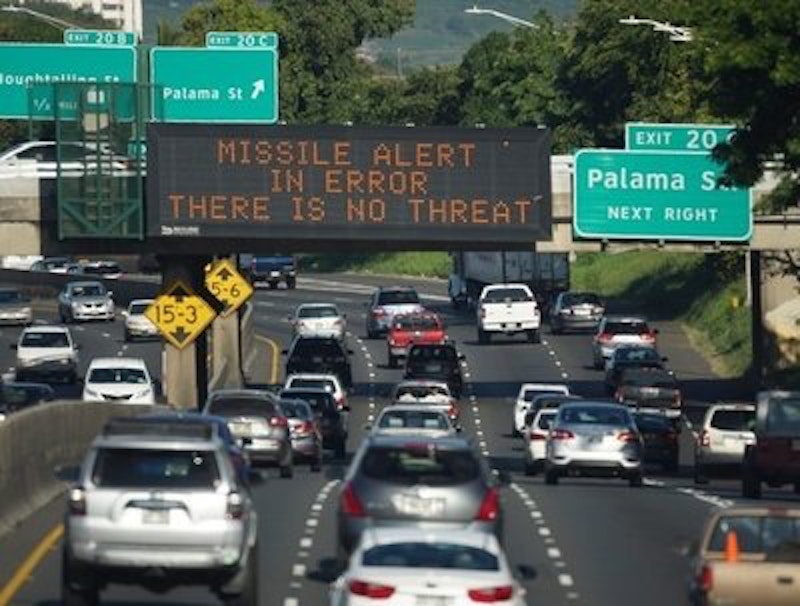 People aren’t very good at keeping things in perspective in an era when every minor grievance automatically gets turned up to an “11.” Take the guy who Facebook unfriended me because I didn’t plan to vote for Romney in 2012 (remember Romney?). Or the (mostly admirable) #MeToo movement now yielding detailed accounts of, for instance, what sounds like little more than a bad but consensual date with Aziz Ansari (he persisted).

So, Trump is reported to have said in private (but denies saying) there are some “shithole” countries, and people understandably raged for a couple days. Meanwhile, the idiotic government of Hawaii plunged its citizens into thirty-seven minutes of abject mortal terror during which, due to the purported pressing of a “wrong button” in the state’s alert system, they believed they were all going to be hit by a nuclear missile.

After having hours to think about it, Hawaii’s government still sent out a tweet saying they’d do a press conference about the “missile launch” instead of saying it would be about the “false alarm.”

Will there be as much anger directed at the (very Democratic) Hawaiian bureaucracy as there was at Trump the past few days? Bureaucracies are harder to hate than lone authoritarian politicians, which is one reason bureaucracies inevitably stop caring about incentives, economic or moral, and routinely make colossal, potentially world-ending errors that in all likelihood will never really be corrected. No clear individual to blame, so no reason to make an effort. We’ll just move on to the next screw-up, fingers crossed and thinking how nice it is that the state’s governor sounds really mellow, in an almost sedated, tropical kind of way. Not like that mean Mr. Trump, no sir.

This lack of perspective also leads to things like the left raging for over a hundred years about the Triangle Shirtwaist Factory fire that killed 146 people in 1911, no doubt seeing it as reason enough to end capitalism in the modern world, while somehow giving a pass to big government, which -- oopsy! -- killed an estimated 300 million people in that same century, about a tenth of the human race at the time. But, you know, government meant well, like a sleepy Hawaiian bureaucrat chilling under a palm tree. All government’s sort of like hanging out in Hawaii, really. No reason to worry.

As with water pollution in Flint, Michigan or Katrina flooding in Louisiana a decade ago, furthermore, media figures have had to avert their eyes from the local (Democrat) causes of the Hawaii disaster and look farther away, to DC if necessary, to find a Republican to blame. Thus the tweet sent by Jamie Lee Curtis blaming Trump for the nuke warning error. He‘s been arguing with Kim Jong-Un, after all, so it’s almost his fault.

Of course, Bill Clinton was the one who assured us all that heaps of treaty paperwork in the 1990s would keep North Korea from becoming a nuclear power, and he even sent his secretary of state, Madeleine Albright, to do a literal song and dance number for the regime about how silly it was that it had once been labeled a “rogue nation.” Her song rhymed “rogue” with “vogue,” reflecting North Korea’s upgraded diplomatic status. As a comic-book-editing friend of mine said at the time, referring to the fascist dystopia in which Judge Dredd lives, “Are we in Mega City One?!”

But we’ve been well trained by a century of liberalism to think that things are only fascistic if they sound harsh and have rough edges. Nothing with a sheen of glamour, smooth talk, humor, or public-mindedness can be fascist, right? But then I recall fashion mogul Coco Chanel.

In a fascinating bit of rebranding, it almost seems century-old fashion company Chanel has been trying to make us forget their founder's nickname "Coco" Chanel, since she was literally a fascist, and make us remember her by her real name, Gabrielle Chanel. But their long series of online ad videos on that theme smack of fascism more than ever, albeit fascism blended with progressivism -- as befits her naive flapper era, to be honest, not to mention Paris and Manhattan in our own.

(My own forays into fashion videos have been more clearly anti-fascist, including my Style Court appearance -- in which my accuser, Michael Malice, was told by the fashion judge that Malice sounded like a fascist and that my wardrobe was OK -- and my brief appearance as a guy able to drink with a liberal without getting bent out of shape at the end of this Refinery29 clip.)

If there’s something that easygoing liberal bureaucrats, Trump, the fashion industry, and hardcore fascists all have in common, though, I suppose it‘s a mixture of utter vapidity and relentless confidence. If you’re saying something you haven’t really thought through carefully, goes the conventional wisdom, be emphatic about it. You’ll make up in the appearance of control for what you lack in true understanding.

Or as those Chanel ads might put it: Bold! Brash! Push people’s buttons. Push wrong buttons! World-ending? Or world reinventing? It doesn’t matter — unless you want it to. The little people will never understand, but your decisions give their lives meaning. Whether it’s the island life or the end of all life — the power is now at your fingertips. Be audacious!

Or thoughtfully, cautiously, rationally end the threat to all life that is government, regardless of its superficial tone.