It's hard to figure out how certain sounds or written scribbles could be evil or obscene. 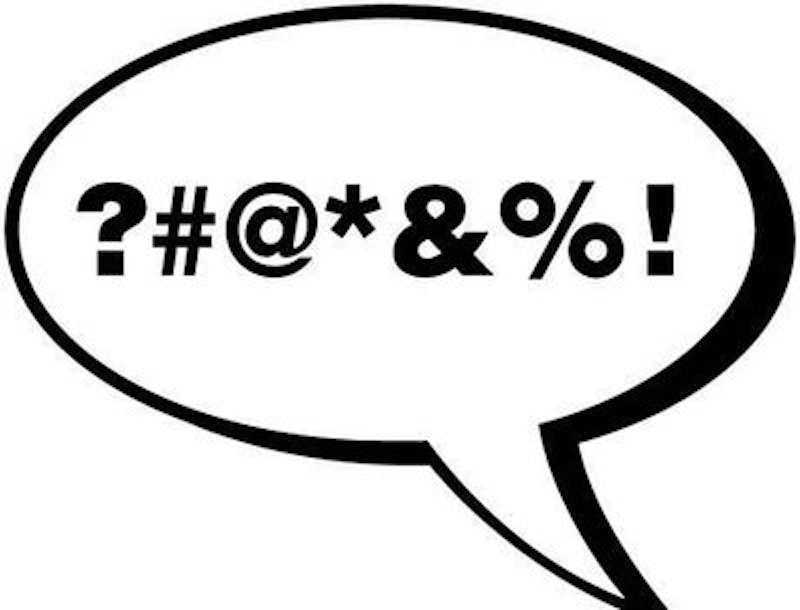 We'd better decide if the basic problem is that Trump used the word “shithole,” or that he’s a racist. One might be offended by both, but over the last few days, the concentration on the “vulgar” term or on Trump's “potty mouth,” has seemed to outweigh the implications of immigration policy for people's lives. “Potty mouth,” for fuck's sake? By all means be anti-racist, anti-sexist, anti-Trump resisters. But don't be little prisses, and don't confuse those two things, alright?

Let's talk about bad words for a minute, and fear of phonemes. It's hard to figure out how certain sounds or written scribbles could be evil or obscene. Are words bad in the way a dog is bad when he pisses on the carpet, or in the way a policy is bad when it hurts people and costs too much, or in the way a war is bad because people die, or in the way a serial killer is bad? It's hard to see how this could be the case with something as abstract as “shithole,” a combination of letters or syllables that can appear here and there, now and then, and which have suddenly appeared everywhere all the time.

People have settled on condemning “shithole” as “vulgar.” This means that it’s common, a word of the lower classes. That seems precisely the right preface to condemning the word also as “unpresidential,” which again is a strange way to talk about some squiggles on a screen or vibrations on the air. I guess “Let me clear,” is a presidential phrase, or “Four score and seven.” The point might be expressed more carefully by saying that it’s unpresidential of Trump to use the word “shithole.” But then again, being presidential is a dubious honor: I try not to hang around with presidential people at all. They're so stiff, and they speak in commonplace cant phrases that no one could disagree with or even register, a kind of unbelievably inoffensive verbal pap. They're fucking inspiring, though, and wear nice suits. Still, I steer clear.

Others have gone with “profane,” which is to be contrasted with “sacred”: perhaps certain terms are heretical, blasphemous, or prohibited by God. I'm going to need some convincing on that one. On the other hand, “profane” might merely mean “secular,” that is, non-religious. According to the Constitution, if I'm remembering correctly, all officials of the United States government, including the President, are profane, insofar as we do not live in a theocracy.

The ideas of vulgarity and profanity begin to show what makes a word obscene. First, a bad word refers in one way or another to bodily functions: sex and excretion, above all. Other terms—“bitch,” for example—denote animality, which in the Western tradition is itself associated with sheer embodiment. We might say that the rich roster of obscene terms in English is a trace of the devaluation of the body in the Western tradition, or the kind of ascetic culture that conceals sexuality and excretion in discrete chambers.

The chambers are verbal as well as physical. These things must be referred to using discrete euphemisms, though the fact that we can refer to the same things in a more polite way just makes the exercise in censoring out the bad words ridiculous. I could say just what Trump said, or worse, and not use any “bad words”: I could talk about creatures crawling out of their open sewers into American cities, for example. Editing out particular words doesn't help. Often, what distinguishes the obscene from the polite term is the origin of the word: Latinate terms are acceptable, whereas the peasant Anglo-Saxon of “fuck” or “shit,” is not. What you really achieve by talking about bowel movements or sexual congress, however, remains a mystery. Well, you manage to talk like a higher-class person.

The Western religious and philosophical traditions are infested with the devaluation of the body, and Plato and Aristotle, for example, begin by asking what makes us so different and so much better than animals. It is that we can transcend our sheer bodily needs and desires through rationality. Then they go on to characterize slaves, manual laborers, and even women (for Aristotle) as being more definitely embodied, and hence more animalistic, than the sort of men who should be running the political system. This oppressive line of thought is imprinted on the ways we distinguish good from bad words and the ways we distinguish good and bad people by the words they use.

This represents the values of a certain class; the “lower classes” are often pictured by the upper as bawdy, sexualized, much more definitely embodied and much more frank about their embodiment. To ascend classes in West is to learn politeness and discretion in the ways and places you reveal or conceal your embodiment. It’s a sort of trace in the social hierarchy of mind-body or soul-body dualism: to be good is to be apparently less embodied, less vulgar, less obscene. All of this is also complexly in play in Trump's politics: people wonder why “white working class voters” would support him, but the class identifications are less about Trump's bank account than about the way he expresses himself. One aspect of that is his “vulgarity”: that is, he talks like an ordinary guy.

Many people take delight in the inappropriateness with which Trump expresses himself, his violation of the thousand tiny prohibitions on speech that seem to many to render the way upper-class people talk empty and dishonest. (“Inappropriate” is a high-tone “potty-mouth”: the moral condemnation of the schoolmarm.) The dishonesty runs deep because people who went to good colleges are just as embodied, just as animalistic as people who didn't. They are creating essentially dishonest personae, or pretending to be what no human being can actually be. They are living in concealment.

Throughout the Trump boomlet, many people—the staff at The New Yorker or the Atlantic, for example—have been obviously as or more offended by his inappropriate Tweets as by his horrendous policy decisions or personal corruption. That shows something about the people who react that way. But it also shows why the country is going to continue to be divided along class and regional lines. A lot of people looked at Hillary Clinton, thought she'd make an appropriate president, and voted for her. And a lot of people looked at Trump, thought he'd make a highly inappropriate president, and voted for him. That's a pretty severe cultural divide.