The Boy on the Ladder

A remembrance of The Strand’s Fred Bass. 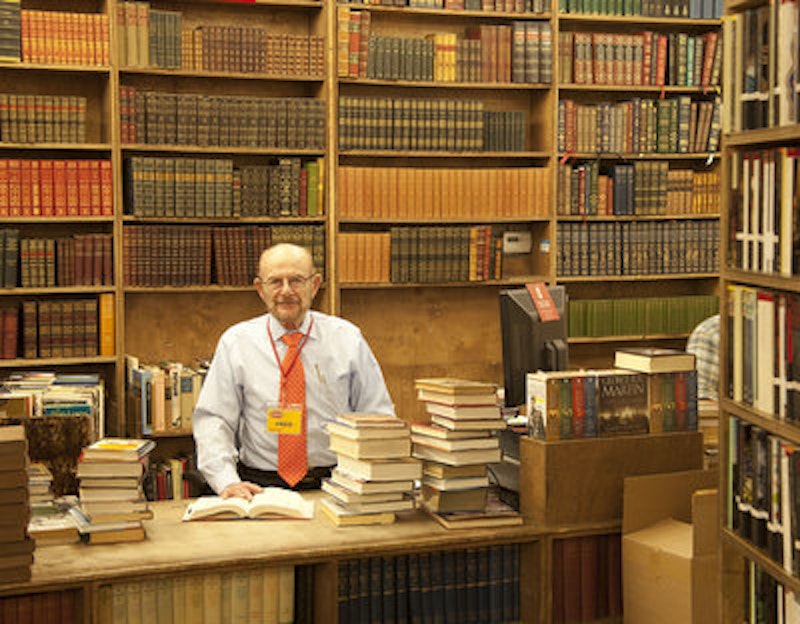 The New York literary world learned last week that Fred Bass, longtime owner of the Strand, the once-small secondhand bookshop on 4th Ave. that’s now the great giant of the trade on Broadway, had passed from the scene on January 3, at 89. Some years back a book-length study of bibliomania down through the ages appeared under the fondly indulgent title A Gentle Madness. Bass himself was certainly a bibliomaniac of the first order, but no one, to my knowledge, ever called him gentle. In such a case, it’s all too tempting to invoke the handy opposing term. I refer, of course, to the word “curmudgeonly.” But anyone who was ever on the receiving hand of the Bassian temper will know that “curmudgeonly” just doesn’t cut it. By way of proof, consider the following incident of yore, one that dates back to the 1970s, when honcho Bass was in his mid-40s and there were still patches of black in his beard.

In those days prior to the Strand’s current system of tagging its books with hidden devices, security was simply a matter of asking that bags be checked at the door—backpacks, shopping bags, and all such carry-ins. In conjunction with this, from mid-day on, as an extra precaution, one or another of the junior employees took a turn on sentry duty from high atop a rickety ladder planted smack in the middle of the floor. It sometimes happened that a customer with a bag sailed right into the store unchecked, past the fort’s first line of defense. It was then the job of the one on the ladder to halt this party’s further advance and order an about-face. The customary, or regulated, position of the sentry was to squat on the crack of the ladder’s top perch, blindly ignoring the warning affixed there: DO NOT SIT OR STAND.

On this particular workday, a day in midsummer, one of the greener junior employees, a college boy of 21, was on the ladder taking his shift, watching over the floor, when an old-timer appeared before him and called up a question. “Where can I find Christianity?” he asked.

Thrilled at this chance to show off his knowledge, the young lad, briskly squaring his shoulders and seeming to grow a foot in the process, proceeded to rattle off directions while physically showing the way as well, turning himself about on his perch and pointing to the stairwell leading to the basement. His burst of joy did not last long. He’d barely finished when a savage voice, the voice of an ogre roused to insanity, thundered his name with so much force, and so close at hand, the boy later wondered how he’d kept his seat on the ladder.

The boy, whose head was twisted to the right, now spun around to the left and found himself gazing down at an upturned face—a face engorged with bloody fury and piercing him with murderous eyes. It was Fred Bass, but not the Fred Bass who had hired him. With his dark red visage and trim goatee, this was no less than the devil incarnate.

The entire store had come to a standstill, customers and employees alike, and now that he had the boy’s attention and all babble had ceased, the devil had a question for him, bellowed to the rafters. “Aren’t you there to tell people to check their bags at the door?” He made a gesture, a flick of the eyes, indicating the old-timer, who stood by the ladder still, as if turned to stone. The boy had the feeling of moving underwater. He followed those eyes of Bass to the old guy, and only then did he see it for himself, see it with both utter disbelief on the one hand, and shock at his own dunderheadedness on the other: dangling from the pale white hand of the guy was one of those huge white department store shopping bags made from the stock of the heaviest ply, and topped by a pair of hoops for handles made from stiffened cord or twine. To the college boy at that moment, his eyes open wide, it looked like the biggest shopping bag he’d ever seen.

And then he made his second mistake. From atop his perch, he murmured to himself,

At which point Bass, who had started away, or was in the process of starting away, as if he’d finished making his point and was about to attend to other matters, suddenly stopped in mid-step, and wheeling around wildly, let out a roar that would have killed a lesser man.