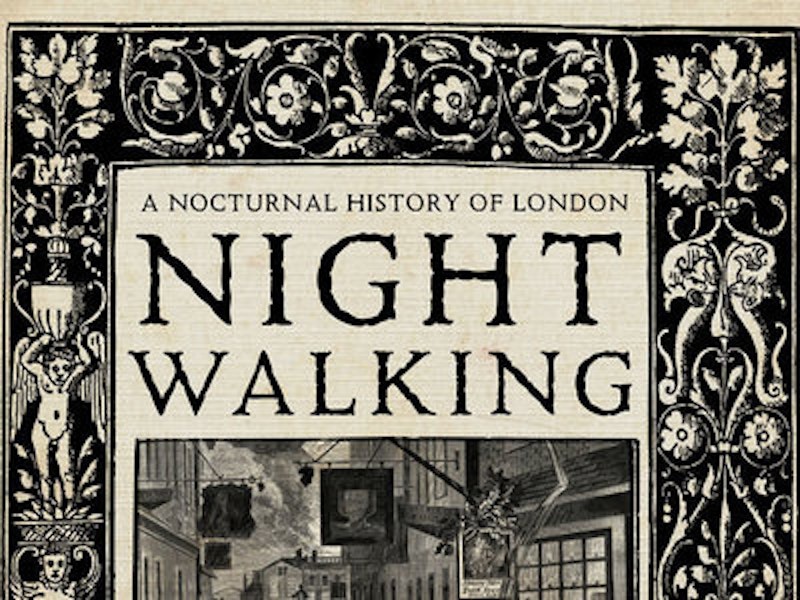 Walk in a city at night and you might feel any number of things: a sentimental romanticism inspired by the streetlights’ glow, fear of the shadows masking alleyways, or confusion because the streets you learned in daylight turn strange. Most of these things are contingent, varying not just with our own mental states, but also with the nature of the city. The technology of the street lighting. The size of the population. The kind of policing at work. All these things flavor the city night in which we walk, and the way we feel about it. The city, after all, is an artificial environment. So is its night.

Matthew Beaumont’s book Nightwalking, a study of noctivagation in London, is deeply concerned with urban night and how people—or at least men—have written about walking in the night over the past several hundred years. It’s not just about those varied emotions any of us might expect. And it’s not even about the way the city shapes night. It goes—the metaphor’s irresistible— a step further. As Beaumont sees it, the night is a space in which walkers can lose their selfhood. Identity dissolves. The night becomes a kind of Nietzschean abyss: walk into it and it walks back into you.

Nightwalking covers hundreds of years of writing about walking at night; poetry, novels, plays, pamphlets, laws, Masonic charters: it seems Beaumont’s read everything to do with his subject. His book largely concentrates on London, but occasionally brings in relevant examples from the United States or Paris. Chapters dealing with the Romantics (particularly Wordsworth and Clare) venture into the English countryside. It moves forward in chronological order from the Middle Ages to the mid-19th century, slowing as it goes along to give more angles from more voices in later eras. Which is just as well; Beaumont’s ability to get texts speaking to each other is one of the more impressive aspects of his book. He’s a man with a fine eye for resonant quotations.

So although the early chapters about the Middle Ages are interesting, Nightwalking really comes alive once Elizabethan pamphlets and proto-novels enter the picture. Writers describe their city in the vocabulary of their times, and we get a better sense of nocturnal London as a place of danger and weirdness. How people of different times saw night as more than just darkness—as the bringer of dreams, underminer of rationality, dark ocean of psychological uncertainty. Also, of course, the natural time for crime.

Beaumont balances the psychological and the practical, discussing how urban lighting and law enforcement developed and how people wrote about the act of walking at night. He makes a convincing case that noctivagation has always been viewed with suspicion; that walking at night is walking outside the bounds of normal society. So there is a timelessness to many of the texts he finds. Or at least a constancy. In any era the mix of city, night, and walking has been viewed as suspicious, even dangerous. And walkers themselves found the night a kind of indeterminate space, site of adventure and also of isolation.

As Beaumont explores his history of the night we get a sense of its identity through the points where eras begin and end. He’s not concerned with the rise of the Tudors or the timeline of the English Civil War. Urban night has a chronology of its own not beholden to standard history, but based on things like the introduction of gas lighting or the sprawl of suburbs. The structure of the book reflects that.

Discussing the Romantics’ view of walking Beaumont observes: “Pedestrianism is in reality a culturally mediated pursuit that cannot function as some primal, pre-social activity.” Walking is not natural, but it allows one to connect with nature; particularly when walking at night.

Put these subjects together, night, walking and the city, and you have a complex book. Beaumont’s thinking is complex to match, and so is his syntax. His prose is almost academic. Always clear, there’s a relentless precision that tends to keep it from being especially evocative. This is odd, as he’s writing about a subject, or confluence of subjects, that are evocative by their nature. As he describes nightwalking, the noctivagant strides through altered states of consciousness; but his own prose is everywhere rational daylight.

Conversely, the structure of his chapters has a haphazard quality. Each breaks down into a series of smaller sections, and each reads like a small essay of its own. So chapters are effectively sets of overlapping essays anchored around central subjects. There’s some repetition, both within a chapter and across the book. And there isn’t much sense of drive. There’s no fixed conclusion to this ramble, no larger sense of logical progress beyond forward chronological movement. I suspect more allusive prose would have had a more powerful effect.

Beaumont’s subject seems to cry out for a Peter Ackroyd or an Iain Sinclair, London writers notable for their deep investigations into the history and psychogeography of their city. Both men are mentioned in Beaumont’s bibliography, but he’s not interested in following their lead through the maze of streets. He’s more formal, lacking the stylistic fluidity of Ackroyd and the tense stroboscopic energy of Sinclair. Perhaps for that reason, there’s little sense of place in Nightwalking, little sense of London as London. Only in the extensive quotations do we feel anything of place. No section of the city comes alive in Beaumont’s own words. A brief afterword by Will Self (who also provides a thoughtful foreword) has more vivid physical description than anything Beaumont attempts.

Beaumont’s far more interested in themes and symbols. So, for example, he examines nightwalking in the context of the development of commercial life over time: as the need to earn a day’s living grew, as capitalist society grew more complex and as daily life in industrial society took shape, nightwalking grew more suspicious. To go about at night, Beaumont argues, was to invert the priorities of commerce, to reject early-to-bed-early-to-rise principles. It was to combine the figure of the flâneur, the wandering wastrel, with the figure of the bandit or the prostitute. It was a subversion of the 18th-century Enlightenment, a literal turning from light into darkness. This is a strong argument, but Beaumont makes it from the outside. We are only ever given glimpses into the psyche of the night-wanderers through extracts Beaumont finds of other texts and through his critical extraction of meaning from their words.

It has to be said that Beaumont’s close readings are very good. His examination of Blake’s “London” as a nighttime poem, for example, was convincing and rewarding; it added a new dimension to a piece of writing I already knew well. As a critic, Beaumont is exemplary. So we must view Nightwalking as a bookman’s approach to the subject: nightwalking not as it is, but as others have written about it.

There are limitations, even so. There are few women in the book, and those that are present are largely seen through the eyes of male writers. As Beaumont makes clear, being abroad after dark in ages before a regular police force and reliable street lighting was a dicey proposition for everyone, and especially for women. So prostitutes are recurring characters in law statutes and novels dealing with nightwalking, but there’s nothing in this book from their point of view.

Had the book continued to follow its subject past the middle of the 19th century Beaumont might have found some women to quote. In fact it’s not clear to me why he stops where he does. He mentions detective fictions, in which cops and criminals switch roles fluidly in the night; he mentions Walter Benjamin. But these are knowingly anachronistic asides. The book is oddly truncated, stopping with London just as it has become the world’s greatest imperial capital rather than continuing on to see how Empire changed the shape of its night. Maybe it wouldn’t have made a difference. Beaumont’s sense of otherness, an idea often evoked in the book, is primarily concerned with class. This is one of the few books about London that gives no sense of cultures mixing in the streets. Beaumont’s nightwalkers are turned inward. They’re pacing out their own psyche.

We are told: “The road at night is the site on which the commonplace and the mythical, the mundane and the marvelous, intersect.” And we believe it. Beaumont’s Nightwalking maps those intersections across time, less for the sake of reaching a conclusion than for the purpose of showing how the concept of the night deepened the more night was walked through. It remained a place in which walkers might lose themselves and find themselves at the same time. Nightwalking is a record of those losses and discoveries, of the increasingly profound sense of dislocation the night breeds. Perhaps the best there is to say of the book is that it’s an acceptable substitute for actual walking at night. To read it, meditatively, when the productive world of business is abed, is to evoke the same sense of dislocation Beaumont describes. The book’s convinced there’s value in that sense. I think it’s right.