Who Are Those Guys in Madison Square Park? 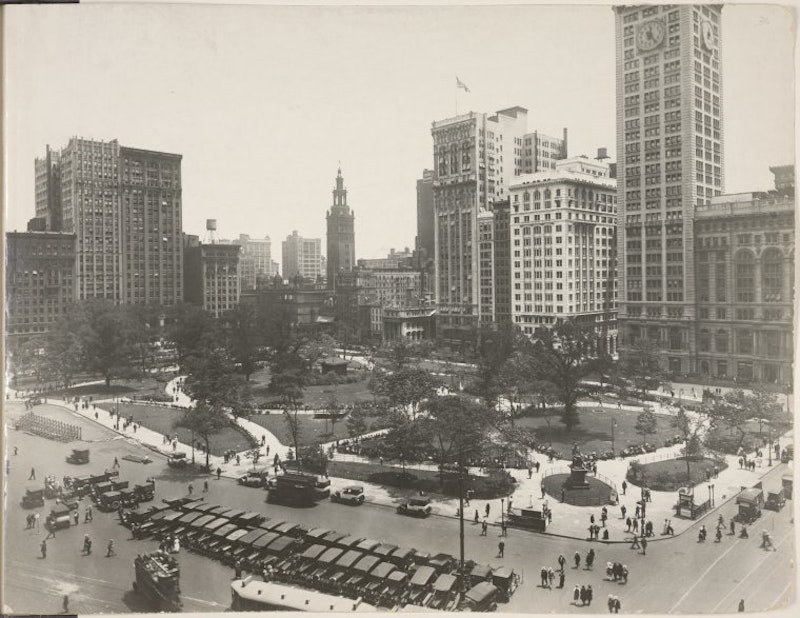 Madison Square became the pleasant oasis it is now around 1870. At the time of the Revolution it was a swampy grassland traversed by a meandering stream, abounding with game. Later, it became a paupers’ burial ground. By the first decade of the 19th Century, a military outpost was established as part of the defenses of the lower city at the junction of the Eastern Post Road and Bloomingdale Road—now Broadway—near the present intersection of 5th Avenue. In 1811 the famous NYC Commissioners’ Report officially designated the street layout of Manhattan Island, and a “Parade” was laid out between 23rd and 34th Streets and between 3rd and 7th Avenues. A few years later the Parade was greatly reduced in size and named for James Madison, the 4th President. In 1844 the square was again reduced to its present size and the Post Road was closed. Madison Avenue itself was opened north of 23rd Street in 1836.

Today Madison Square is one of Manhattan’s pleasantest oases, home to the original Shake Shack (2005) and the annual Barbecue Festival, among others held there during the warm months. It’s also home to a number of statues of people not immediately recognizable to New Yorkers today, though in their day, they were household names… 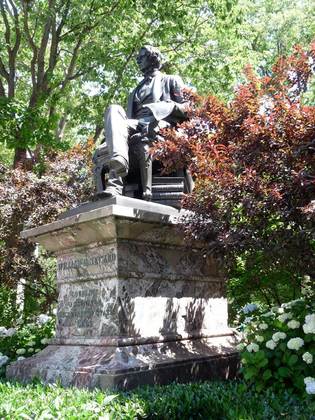 Senator William Henry Seward (1801-1872) is remembered by a prominent work at the park’s main entrance at 5th and 23rd Street. The Senator’s main claim to fame is that he engineered the sale of Alaska from Russia to the U.S. in 1867. But he was also a powerful government figure: governor of New York, 1838-1843, U.S. Senator from New York, 1849-1861, and Abraham Lincoln and Andrew Johnson's Secretary of State, 1861-1869. At the 1860 Republican Convention he nearly beat out Lincoln for the nomination. Though he was against slavery, he opposed war with the Confederacy.

The statue, by Randolph Rogers, was unveiled in 1876. When Rogers completed a statue of Lincoln for Philadelphia’s Fairmount Park, there were striking similarities between the two figures, and some claimed that to save money he used the same figure twice. What actually happened is that the committee for the Seward statue was unable to afford the sculptor’s full fee. So with a few changes in body details, some repositioning of limbs, and the alteration of the Emancipation Proclamation to fit the size of the Alaska Purchase agreement, including the signature pen, Rogers was able to recycle the statue. Seward was the first New Yorker honored with a public monument. 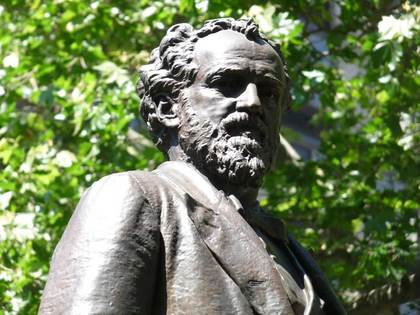 Described as a forceful, charismatic and flamboyant orator, Roscoe Conkling (1829-1888) was a Senator from New York between 1867-1881 after two stints at the House. In 1876, Conkling lost in a squeaker to Rutherford B. Hayes for the Republican presidential nomination (Hayes later triumphed in the general election by amassing more electoral, though not more popular, votes than Democratic opponent Samuel Tilden, in a situation not unlike the 2000 presidential election.)

In March 1888 Conkling was caught outdoors near Madison Square during the worst of the Blizzard of '88 and died from exposure six weeks later.

1920's comedian Roscoe "Fatty" Arbuckle was named for the senator. Apparently, Arbuckle's father thought his son was the product of an affair, so he named him after a hated politician of his youth... Senator Roscoe Conkling!

Sculptor John Quincy Adams Ward’s memorial statue was dedicated in 1893. Ward has many statues scattered about Manhattan, including the George Washington at Federal Hall on Wall Street. 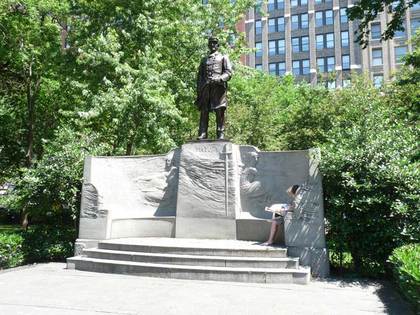 The greatest naval commander of the Civil War, David Farragut's father was a Spanish sea captain who fought for the colonies in the Revolution. After his mother died, his father allowed the boy to be adopted by U.S. naval officer; Farragut (1801-1870) accompanied him during the War of 1812, and Farragut obtained his first command during the Mexican War in 1848.

In 1862, when Farragut's Union fleet took New Orleans, he was made a rear admiral. Fifteen months later, Farragut sailed to Mobile Bay to take on one of the Confederacy's most indispensable ports.

At the height of the battle for Mobile Bay, Farragut was lashed to the mast of his ship so he could see further into the distance. Noticing that the bay was booby trapped with mines, Farragut chose to enter the bay anyway, shouting "Damn the torpedoes! Full speed ahead!" In naval parlance of the day, a mine laid at sea was called a torpedo. The North took Mobile Bay.

Congress created the rank of vice admiral for Farragut, and he later became admiral.

Farragut is  memorialized in sculpture by Augustus St. Gaudens on a pedestal by Stanford White, dedicated in 1881. He is accompanied by two figures representing Loyalty and Courage, as well as by two dolphins. Sculptor Saint-Gaudens, who also created the statues of Peter Cooper at Cooper Square and General Sherman at Grand Army Plaza, made extensive use of lettering that recounts Farragut's career. The monument is regarded by experts as bringing revolutionary change to public sculpture—combining figure, pedestal, and setting into a stylistic unity. 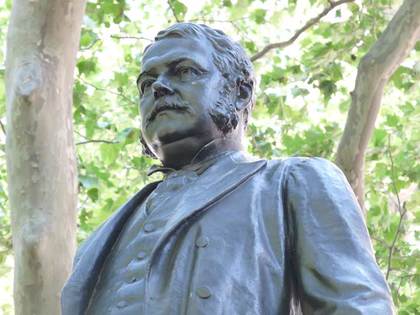 With his dignified bearing and carefully arranged whiskers, Chester A. Arthur (1829-1886) looked the very model of a modern U.S. President (in the Victorian Age), which he was between 1881 and 1885. A transplanted New Yorker originally from Vermont, he was elected as James Garfield's vice-president and assumed the presidency when Garfield was assassinated, taking office at his nearby residence, 123 Lexington Avenue, a building that still stands. He was a close friend of Conkling.

As President, he reformed civil service and introduced the merit system in federal employment. Despite Mark Twain's support, he did not receive the Republican nomination in 1884. However, it may have been just as well, because Arthur knew by then that he had a kidney illness that would claim his life. He died in 1886.

During Arthur's term, the Brooklyn Bridge opened in 1883.

The monument, dedicated in 1889, was designed by George Edwin Bissell, who was also responsible for Civil War monuments in Waterbury, Salisbury and other Connecticut municipalities.