All this wisdom is coming my way. 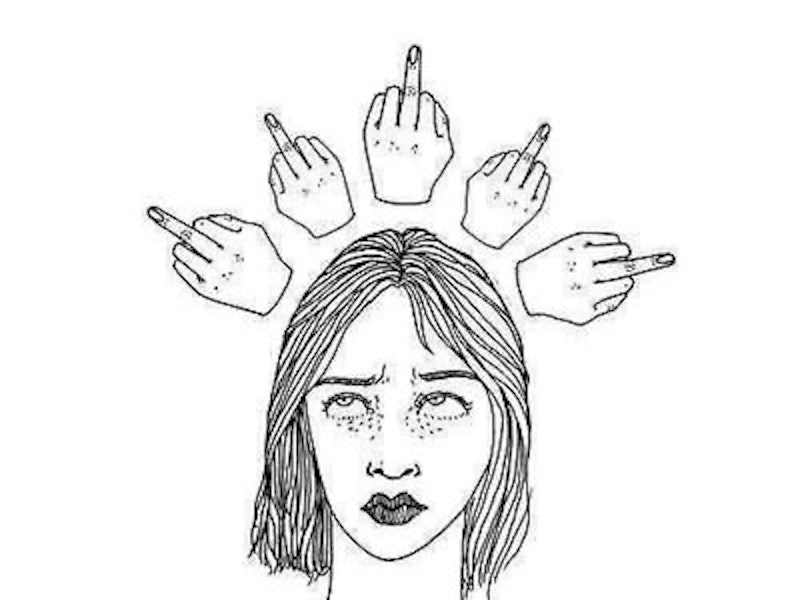 When I’m 50, I’ll give “give zero fucks” like they say in all the memes. Not say I give zero fucks in the annoying trendy way of a stick-figured e-card, but actually not give a shit in the truest sense of the concept, the way that one person you know and admire doesn’t give a shit about anything or anyone. At 50, I won’t care what people say or think because I’ll be a grown-up then. Not in the annoying “someday when I’m a grown-up” way or the “I’m so sick of adulting,” either. I want the mean girls to finally truly be meaningless when I'm 50.

I’m a woman of a certain age, and it’s the age a woman doesn’t know she is anymore because she has too many kids and can barely keep track of their ages—true story: at a book club last week we had to go around and tell our kids’ grades, and I got one wrong (one out of four wasn’t bad). The only reason I know my age is that I misstated it to a woman my own age and she corrected me, iPhones were taken out, 1969 was subtracted from 2016, the bet was settled, and I lost. It’s pretty pathetic when your age has to be determined by your smartphone. Normally, if the subject of age arises, my preferred phrase is “pushing 50” because it eliminates the need for mathematical estimates and/or calculations.

I’m enough of a drama whore to know that when 2019 arrives and I’m 50, I’ll treat myself to an obnoxious trip to celebrate it, because there will be an excuse. This is the remainder of my to-do attitude shift list:

—Not yell at kids anymore because by then two will be full adults and two will be in high school and dammit by then if those two are still bickering? I’ll just walk out of the room. I’ve said “Stop bickering!” too many times in my life to count. Won’t miss that. Will appreciate the time I have with my kids, because I realize how fleeting it is.

—Remember to treasure the women in my life who check in, who care, who text, who want to have coffee, who send me an old-fashioned card in the mail. How rare and wonderful, these friendships we have. I want to make sure I visit, travel if needed, be grateful for each of them.

—Send only positive energy out into the world. Christ, I don’t want this whole thing to sound like I’m going to join some hippy-dippy commune when I turn 50, but I think there’s something to be said about weeding out the negativity in your life, just like you weed out the real weeds from your garden. It’s got to be done regularly, or more grow. I’d rather let the sunshine grow flowers than weeds. (See, total flower child shit there. I blame being born in ’69, what can I say?)

—Create things. Writing, making mosaics from beach finds. I don’t want to be a sea glass hoarder. It either goes back in the bay, I sell it, or I make something out of it. At 50, I just want to create.

—Organize, minimize, reduce. Anyone who read my review of the The Life-Changing Magic of Tidying Up knows that although I may have not loved the tone of the book, I actually did embrace the concept of throwing out 75 percent of my crap. By 50, I’d like to do that.

—Accept myself. I don’t know how, but I’ll get there. Stop being self-critical. Do what I want, chill more, worry less, kayak more, stress less. I can feel that pattern starting, but with raising four kids, it took a long time to see the light at the end of that long parenting tunnel where so many things come before your own needs.

The flight attendant always says if you’re traveling with children, to administer the oxygen to yourself first, and then the kid, but I think it took me a half a century to learn to do that.