When the Bike Went Out From Under Me 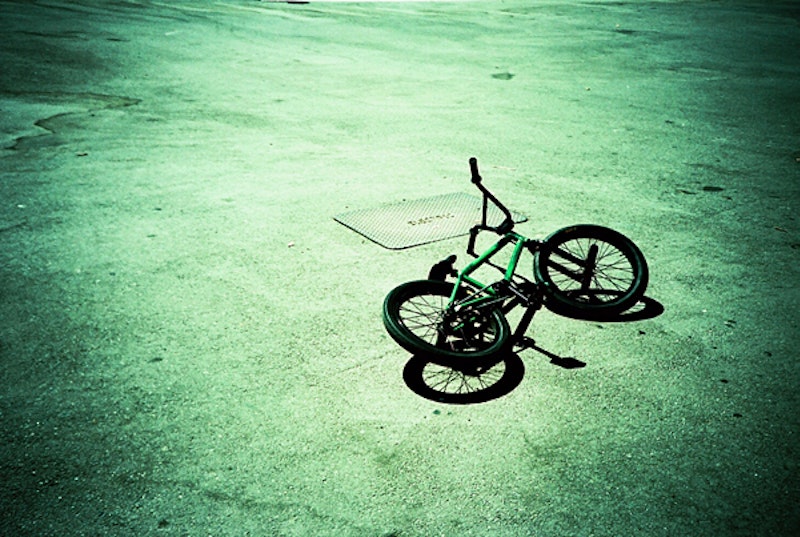 The fact that it all happened in broad daylight beneath a clear blue sky gives the memory an Icarian quality. I could've been traveling on a skate board, a little red wagon, a horse, a gigantic tire, a sleigh, any un-motorized thing that can demonstrate the raw power of gravity. But it was a bike. I was riding a bike when it happened. And I was 12 years old, maybe 11.

Chuck and Rob were the same age. They were riding bikes too that day, but for them it wasn't so special. They'd done this a thousand times before because, unlike me, Chuck and Rob had lives that revolved around strenuous outdoor activities. They went fishing, they did skateboard tricks, they even played sports, though neither of these guys could be described as jocks. Rob was the first kid I ever met who smoked cigarrettes and got drunk regularly. He was the first kid I ever met who liked both hardcore punk and hardcore gangsta rap, and he was the first kid I ever knew who claimed to have lost his virginity before he was a teenager. Chuck was a math/engineering whiz who played Dungeons & Dragons, listened to country music, rode horses and occasionally even drove a full sized tractor plowing the fields of his family's farm.

And how did I end up hanging with these rough, salt of the earth kids? Quite simply they lived down the street from me and they were way more adventurous than most of the other kids who lived in my sleepy Maryland neighborhood.

At 12 years old, I spent most of my days indoors, hypnotized by wacky B-movies and TV shows, or lost in a giant pile of novels, encyclopedias, magazines and comic books. Blaring classic rock was another one of my favorite insular past times; The Velvet Underground in particular kept me glued to the stereo. I'd be well into my teens before discovering a circle of friends who shared these esoteric obsessions. Until that time, I had to think of some other hobby that was almost as exciting as the fiendish absorption of cultural arcana, or otherwise confront extreme boredom or, even worse, hangout with my mom—a fate worse than death for my rebellious, desperately independent younger self.

My quest for the ultimate pre-teen kick led to off-road bicycling, as the town I grew up in was a perfect place for the activity. Situated at the crossroads of suburbia and agraria, there were dusty trails of all shapes and sizes all over the place and most of them were within spitting distance of my childhood home. There were also a great number of hilltop vistas and rocky cliffs in the area, and one particularly tough off-roading destination was in the front yard of the home that belonged to my schoolmate Russell Nolan's elderly grandparents.

His grandparent's house was located at the bottom of a long, windy, rarely traveled road, but that wasn't the main attraction for dirt bikers. Just to the left of Russell's grandparents' driveway, there was a steep, grassy hump that stood about 4 feet tall and 3 feet wide—this was the holy grail, the ultimate obstacle for local BMX thrashers of all ages. Not only was it within close range of a place where you could effortlessly excellerate to top speed, but once you'd reached top speed you'd be jettisoned 50 feet into the air as you hit the gradual four foot slope.

Chuck and Rob eventually told me that they used to make daring jumps off this natural ramp every other day, but for some reason I never noticed it until the pair unexpectedly headed down the road toward the Nolans' home after the three of us had been biking together for about a year. Since I could always count on these two to find the coolest stunt spots, I went ahead and followed them. Soon enough, I saw my daredevil friends zoom down the hill and take to the air with Evel Knievel-like grace. After making their respective jumps and hitting terra firma safe and sound, they biked over to the edge of the Nolans' property to wait and watch as I started peddling down the hill.

Everything seemed to be going according to plan: the air was warm and dry, the sun seemed to drench every piece of ground in sight, the wind was rushing through my hair, there wasn't a single car or pedestrian. Nearby, the static gaze of a large cattle herd shot out at me from just beyond a knotty old farm fence. No cars were parked in front of the Nolans' place. If not for the incessant buzzing of bicycle wheels you could've heard a pin drop that day.

As I approached the hump, faster and faster, I brielfy noticed Chuck and Rob. Their mouths were frozen agape, their eyes bulged. This is when it happened.

The next thing I knew I was airborne. At some point on my magic flight, the bicycle I was on flew out from between my legs and smashed into a mammoth oak tree nearby, where it was briefly lodged between two banches. It got stuck there for all of 2 or 3 seconds before it came crashing down. How I managed to dodge that oak tree is beyond me. I was definitely floating through the air for several seconds longer than my bike. As my body dutifully obeyed the laws of physics, without even trying I did a complete back flip. My heart was pounding, and I could hardly breathe. My head was throbbing, but I felt no pain. My limbs were weightless and sprawled about like slow plumes of exhaust billowing from some doomed aircraft. The emerald sea of the Nolans' front lawn met my limp 12-year-old body with a dull thud.

Suddenly I heard a screen door slam. It turned out that Russell Nolan's grandpa was home. Technically the three of us were tresspassing and vandalizing the Nolans' property (bike tires can leave some nasty turf marks on fresh mowed grass), so Chuck and Rob took off as fast as they could, leaving me to face Old Man Nolan by myself.

"Great God almighty! Are you okay?", he exclaimed, staggering towards me.

Hesitating for a moment to catch my breath, I looked around at the bucolic surroundings all spinning in a weird post-vertigo haze.