A lamppost and horse trough combo and a revived Polo Grounds remnant in Hamilton Heights. 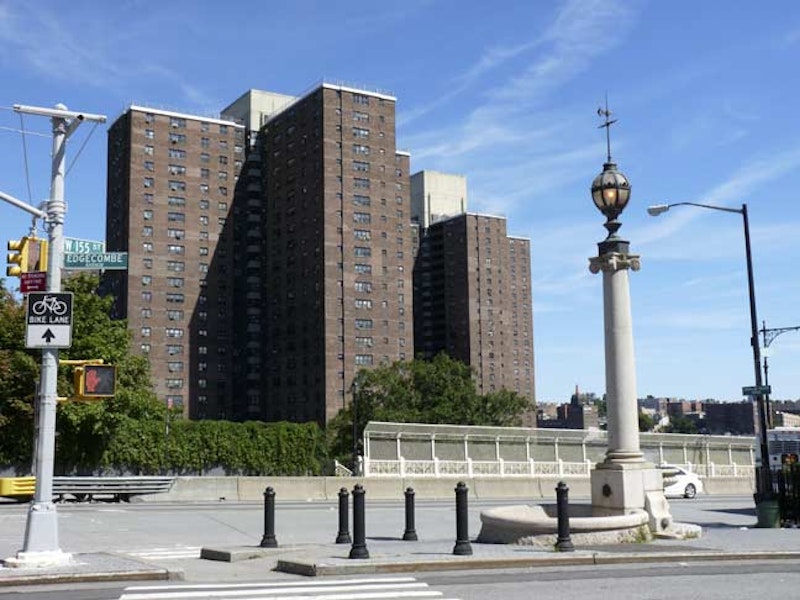 The highly unusual Hooper Fountain at Maher Circle, West 155th and Edgecombe Avenue and St. Nicholas Place was a gift from civil engineer/newspaperman/entrepreneur John Hooper. In his will, made public upon his death in 1889, he appropriated funds for the construction of two public fountains that had to include horse troughs as well as drinking fountains. Both fountains were built in 1894: the one here, designed by George Martin Huss at Maher Circle and another, in Brooklyn at Flatbush and 6th Avenues in Park Slope, that disappeared long ago.

The unusual design features a trough topped by an Ionic column with a human-scale drinking fountain appended, while the column is topped by a spherical lantern topped by a weathervane.

After motorized traffic began to overtake equine in the early 1920s, the trough became an anachronism and there were efforts made to have it removed to a bridle path. But here it remained, decade after decade with no upkeep, gradually deteriorating. Vandals finished it off in 1981. However, it was renovated, brick by brick, and restored to its old spot in the mid-1990s. 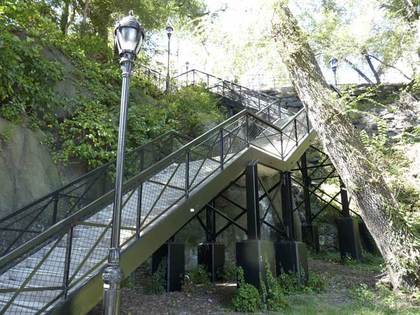 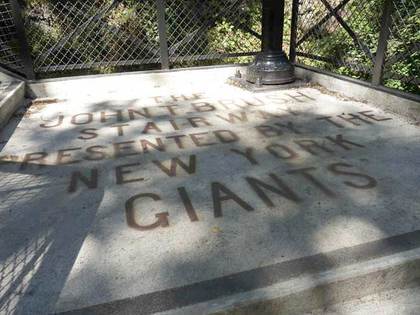 The old, previously-rusted and dangerous John T. Brush staircase, at Edgecombe Avenue between West 157th-158th Streets and named for a former NY Giants owner, has been miraculously revived. The restoration took almost two years and was completed in 2013, fifty years after the last baseball game was played at the Polo Grounds. Funds were provided by the NFL New York Giants and New York Jets as well as MLB’s New York Mets, Yankees and 2010/2012/2014 World Series Champion San Francisco Giants, all of which had played at the Polo Grounds during its history. The metallic letters embedded on the first landing that identify the staircase have also been restored in an admirable show of thoroughness.

John Tomlinson Brush was born in Clintonville, New York in 1845. After founding a clothing company in Indianapolis in 1875, he became involved in local baseball teams to help promote the city and business. He later owned Indianapolis’ short-lived entry in the National League in the 1880s, and later acquired the Cincinnati Reds in 1895. After selling the Reds in 1902, he bought the New York Giants the same year. When the Giants won the National League pennant in 1904, he agreed with manager John McGraw that the Giants shouldn’t play the “junior circuit” American League champion Boston Pilgrims (later, the Red Sox) because of an ongoing disagreement with AL president Ban Johnson. The World Series would be played every year thereafter, though, until 1994, when a players’ union strike forced a cancellation. Brush was on his way to California on board a train in 1912 when he suddenly passed away; he had suffered from ill health for some time.

The staircase was commissioned by Brush’s son-in-law Harry Hempstead and was used to provide a means for Polo Grounds fans to climb the steep escarpment known as Coogan’s Bluff to the neighborhood now called Sugar Hill. The staircase remained in place after the Polo Grounds closed, and is the last tangible remnant of the old ballpark.

The staircase, with two landings and three separate staircases, is quite the workout for your out-of-shape correspondent.