Everyone needs a lucky garment. 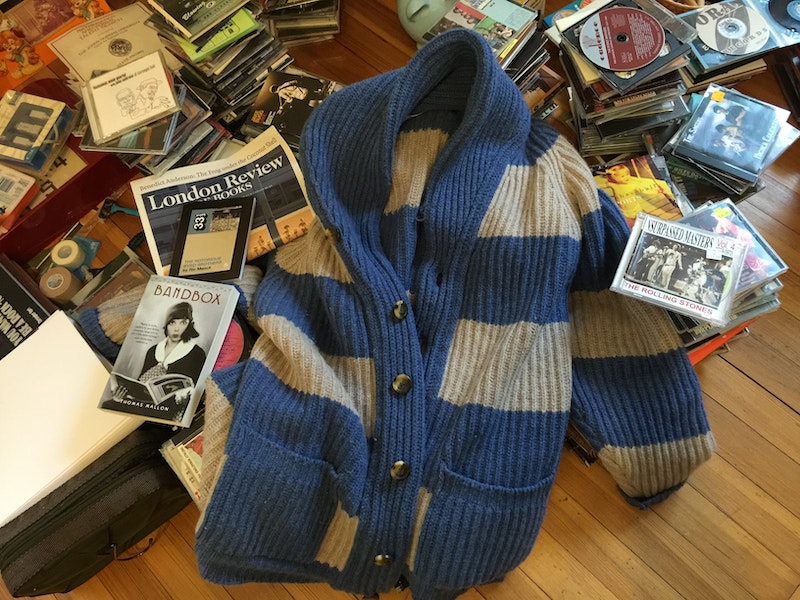 A couple of days ago I was walking on St. Paul St. when an older man—well, about my age, I’d reckon—stopped in his tracks and said, “Aren’t you the gentleman I saw a few weeks back who was wearing that flashy blue and white striped sweater?” I mentally applauded his memory, said yes indeed, and was about to move on. But he continued: “And today, you’re wearing the same make of cardigan, just in a different color [burnt orange].” He then asked where I’d purchased the “flashy” sweater and I replied that it was in a small shop in Roland Park. “Eddie Jacobs, right?” I said yes, and he told me he’d called Eddie asking if there were any of the blue and white wool Scottish-made Scott & Charters numbers left, but was met with an apologetic no. Upon taking his leave, the man added that he’d been a customer of Baltimore’s best traditional men’s clothing store for years, and showed me a belt he’d picked up there.

In this less-civilized era of Americans dressing down, or, worse, like slobs, I haven’t much occasion to buy new clothes—unlike the 1980s and 90s, when my closet was filled with ties, suits, sports jackets, spiffy shoes and the like—but do visit Eddie Jacobs a few times each year, to replace worn-out turtlenecks, corduroys and sweaters. (As for drawers, not to get overly personal, I restrict my patronage to Barneys in Manhattan, where, at least since Sulka closed its Park Ave. location years ago, offers the finest in that category, an Italian make called Lorenzini, which aren’t at all similar to those tents sold at Brooks Bros.) I’ve picked up sweaters for years at Eddie’s, but this striped, and really warm, cardigan, has, in the past four months, elicited at least 25 remarks from both the young and old. In late December, I was in line at a coffee shop, and a skinny-jean fellow in front of me, around 30, took a look, and simply said, “Sweater: awesome!” If you say, Jazzbo, although the not unpleasant ruckus puzzles me. Guess it’s just a lucky garment, and as one who’s given to mild superstition—picking up pennies, playing the same music the night after a Red Sox win—I’ve no complaints.

Long ago, in the early 1980s, when I first had a reasonable bank account, and my first credit card, I was able, at 27, to ditch the rags I’d had since college and spiff up the wardrobe. In Baltimore, that meant going to the old Eddie Jacobs location on Light St. (the store moved to Roland Park a few years ago), since aside from the trend-driven, and now-departed, Bernard Hill in Hopkins Plaza—really pricey, but there were occasional sales on their European wear, the kind of suits that were of-the-moment one summer, and by the next looked like a Halloween costume—there wasn’t much to choose from. No knock on Eddie: his conservative inventory is all-quality, always has been, and I’ve never met a more congenial and intelligent haberdasher.

I left Baltimore in 1987 for Manhattan, where I shopped at Midtown’s Paul Stuart for suits, and most of my ties, shirts and shoes came from trips to London or Milan—but upon returning to Baltimore in 2003, was delighted to renew my friendship with Eddie. I’d take my sons there on a Saturday jaunt, and while Eddie and I talked politics local and national (we agree on most issues, which is rare in Baltimore), they constantly nudged me to split for Fells Point. I couldn’t really blame them: if we arrived early enough, before a rush of customers, Eddie and I would gab for the better part of an hour. These days, my younger son Booker will drive me to Eddie’s but he usually reads a book in the corner, occasionally giving a pointed glance to wrap it up. I do, but with great reluctance.