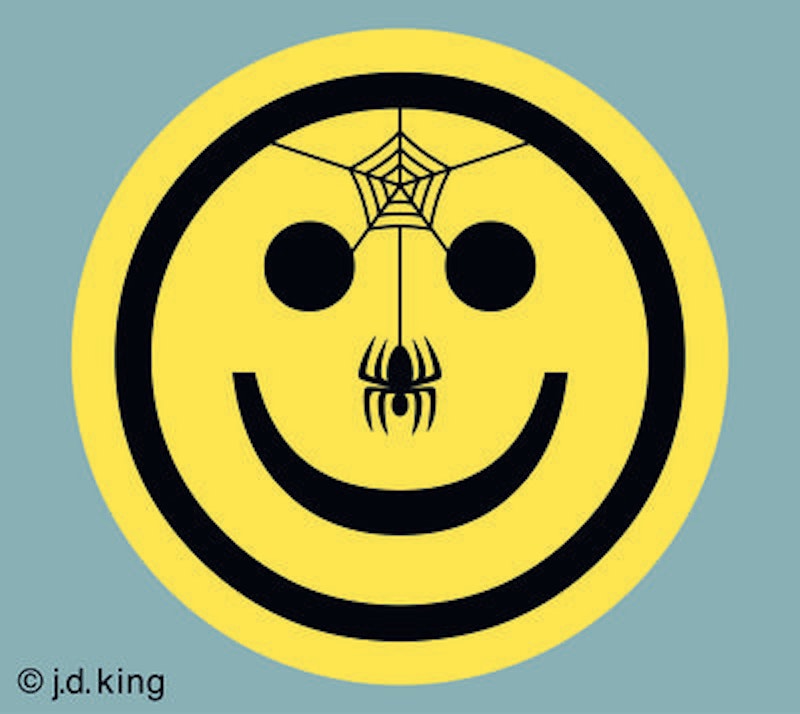 I slid into a booth, ordered a grilled cheese with tomato, fries, and a chocolate malt. It was delicious. And the diner was empty. I loved having the place to myself. No screaming brats, no idiots. I believe that most people are plastic or tin: cheap, breakable, throwaway stuff. Once in a lifetime you meet someone who’s precious.

Watching the parking lot from my window, the sandy dirt glowed like gold in the noonday sun. A good omen. I snagged a paper from the counter, did the crossword—Wednesday, an easy puzzle. I finished it before leaving, no sweat. I always carry a pen, just in case I meet a crossword. I was a Scout. Be prepared. Also, I’d never borrow someone's pen. You have no idea where their hands have been. In fact, I handled the newspaper as little as possible. And even then, ate my sandwich and fries with a knife and fork. I wouldn't consider washing my hands in the men's room because—dig this—who's been touching the faucets? Where have their hands been immediately prior?

The waitress was a scarecrow, 80 if she was a day, missing a few teeth. Disgusting. It was her birthday. I guessed her age as 39. She said, "G'wan witcha!" I left a real nice tip, 10 bucks. I liked that waitress, and I wish her well. Every so often, I say a little prayer for her. It's not easy being old, and it's not easy being a waitress, they tell me.

My dad? He's not there, even when he's there. Talking to him, face-to-face, it's like he's in a house around the corner, upstairs in the attic, door locked, the key smelted. Or maybe he's on the moon, happy as a clam. My mom's not much better, but more of an actual pain. The first chance, I was out of there, got a job on the railroad.

That was fine for a while, then I found work in town, pushing a broom, then a pencil. Movin' on up.

One day I said to heck with it, told the boss I was through, left him holding the bag. Loved that. Fuck him. Hard and running! Asshole.

I allowed myself 36 hours to sell my possessions. (Life has imposed many parameters on my existence. I fight back by establishing my own parameters.) Except for some clothes, anything I didn't sell went to Goodwill. I stuffed my duds and a shaving kit in a small carry-bag and walked out of the apartment, owing my jerk of a landlord two months. Hate that guy. Hitting the sidewalk, there was a spring in my step, the old wallet fat with 20s.

In a few blocks I spotted what I needed: an unlocked car, a new Pontiac no less, the key under the passenger floor mat—Bullwinkle, that trick never works! I found a filling station, topped the tank, and hit the road, Jack. I took the back ways, the scenic routes, no plan, unless you call "drive as far as you can go on this one tankful" a plan. That was the rule—the parameter—use up the tank, wing it from there. I was feeling lucky. No map, I just went. Turning on the radio, I found a good song. After my little lunch, I just kept on trucking, then around six, out of gas, nosed the sputtering Pontiac into a ditch, grabbed my bag, hoofed it. I walked for hours. It was getting dark that June evening when I saw her house, a cabin, the first sign of civilization I'd encountered after an eternity of forest.

She was cutting the grass, using one of those push mowers, no engine, nice and quiet. And let me tell you, the smell of fresh-cut grass just slays me. Love it. As I approached, kicking a 7-Up can to announce my presence, she looked over and said, "Hi!"

"Nothing. Just going for a walk."

"You look thirsty. Would you care for some ice coffee?"

Don't you believe in love at first sight? I do. Just like I believe in wishing on a falling star. I've lived for "some enchanted evening" almost my entire life, since I was three or four. I took those lyrics to heart. And here it was, in living color. She was like a mirage, a Venus in bell-bottoms. Or Susan Dey in The Partridge Family. Or maybe Karen Valentine getting off that school bus in the Room 222 opening credits? Karen's expression when the doors close in her face? That's Amy to a T, in a way.

Whatever. I call Amy "Perfection Plus." And we fell in love at first sight. Just like that. I call her Perfection Plus and she calls me Prince Charming. We sat on her screened-in porch, sipping our ice coffees, bugs banging against the screens, fighting to get at us. I told her I was starting a-fresh, no ties to bind. Insect life buzzed monstrously out there in the dark void. That sound was an entity unto itself, a symphony of life. She'd inherited a small fortune, but desperately needed someone special to share it with. Dough is worthless if you're alone.

We stayed up to daybreak and rapped about everything: our dreams, our thoughts, our disappointments, all that jazz. It was such a sweet and gentle time, the night breeze caressing, a beeswax candle casting dim light. In one corner a spider spun its web while the insect multitudes droned. I'd never known anything quite like it. Ever.

The Carpenters are my preferred rock group, and my favorite song of theirs was "Solitaire." But now it's "We've Only Just Begun," because there really are so many roads to choose, yet I chose the exact ones that led me right to Perfection Plus quietly mowing her lawn.

What if she'd mowed the lawn the day before? Or that morning? Was indoors watching TV or out running an errand when I happened by? It's things like this that make me believe in prayer and astrology. You can't fight it. The universe? God? Bigger than us, my friend. We're so small in the overall scheme of things. Just roll with it, it's all part of the Big Plan. Give in, go with the flow. Surrender.

Be that as it may, we visited the preacher man, tied the knot. That was a few years ago. Now we've got the little ones.

Driving around one day, I ran across this defunct amusement park selling off its rides, bought the carousel, 10 cents on the dollar, paid 'em cash, then hired some illegals to cart it, cheap. It's in our backyard. When evening arrives Perfection Plus and her Prince Charming relax on matching chaise lounges, with ice coffees, watching the little ones go 'round and 'round, laughing.