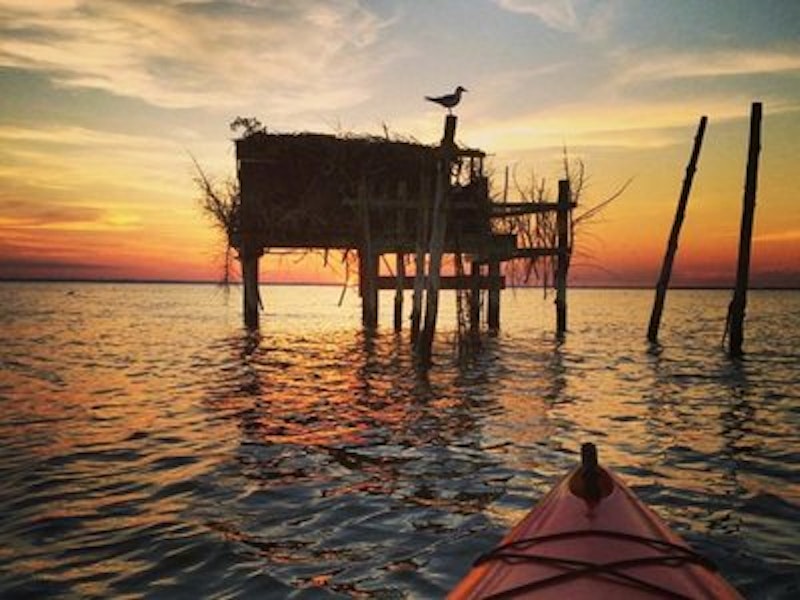 A year ago I wrote a harmless piece, “Two Kinds of Hunters” about peacefully co-existing with wildfowl hunters as a hunter of sea glass. At the time, I hadn’t been shot at, but now everything’s changed. A few weeks ago, I kayaked to my traditional sea glass-hunting beach on a Saturday. Normally, for my own safety, I’m familiar with what ducks and geese are in season, and I thought at the time only snow geese were, but in any event, I was cautious as always, checking the duck blinds to see if there were any boats around indicating hunters were inside—there weren’t. All was quiet on land and shore; I thought I was alone.

I peacefully hunted the shoreline, picking up colorful shards of worn glass and pottery and the world was silent right up until I turned a slight corner on the beach. I heard a group of ducks and geese take off from the water, and suddenly I was surrounded by the shocking sound of close gunfire. I was convinced I was about to die. I stood still, eyes closed, bracing myself, until thankfully the bullets stopped. Thinking the bullets must have come from the land towards the now-clear water, I turned to run up from the beach onto the higher land, to tell the hunters I was there, so they wouldn’t shoot in my direction again.

And then, the single bullet came. It landed about 10 feet from me, and hit a piece of driftwood. And then I heard the very faint sound of faraway laughter and realized the hunters were in the duck blind out on the water. I reconstructed the events in my mind. I’d turned the corner on the beach, which had scared the ducks, the prey, frightening them sooner than the hunters had intended and causing them to shoot frantically at the birds, obviously missing them. The hunters, annoyed at losing their dinner, had then fired a warning shot to scare me off the beach.

I was horrified. My opinions on gun rights immediately changed, wishing I had one in my possession. I was suddenly a big supporter of the second amendment, wanted a membership in the NRA, shooting lessons, and whatever weapon had a long-enough range that would reach the duck blind from the land so that I could shoot back. I didn't want to kill them, exactly, just wanted to scare them like they had scared me.

Of course, I got in my kayak and left the beach. Hunters sit in duck blinds drinking who knows what and I sure as hell wasn’t sticking around. I didn’t get to sea-glass hunt half the beach, and they weren’t having duck for dinner. Forget guns, the next thing I fantasized about was a cordless saw of some kind that I could take out via kayak and use to quickly saw through the three of the four mostly-rotted posts of the duck blind, paddling away into the sunset as I watched their shelter fall into the water. Let their drunken asses drown in the freezing water. The crabs would eat the evidence by spring.

As I paddled back into reality, I thought about calling the Department of Natural Resources, since I’m pretty sure even if they had hunting licenses, humans weren’t covered, but I wasn't sure DNR worked on weekends, plus I was embarrassed not to have checked which ducks were in season (there were two or three species left, for another week or two). I was also embarrassed for the beach owner to find out I was out there on a Saturday when she’d always told me to only sea glass hunt on Sundays in winter when the hunters weren't out there (apparently they are in church praying on Sundays for good aim the other six days of the week). But sometimes the kayaking conditions and weather are just better on Saturday than Sunday, so I’d taken a risk by going out there, and didn’t report the hunters.

The worst part of the story is this: on my way paddling back, I saw a guy in a canoe. Oh no, I thought, this guy is headed out to where those hunters are! I’ve got to warn him! So I quickly paddled over and said “Hey listen, don’t paddle anywhere near that duck blind! The hunters are in there and they almost shot me! Fired a bullet only 10 feet away—nearly hit me!” And he looked over at me with a sneer, and just as I realized he was wearing an orange sweatshirt, he said “Oh yeah?” with a snort, I realized I had just tattled on one of the hunters to themselves—he was the transportation boat that had been summoned to bring the hunters back to land.

Hunting season ends this week, so I better not see their camouflaged asses out in that duck blind again until next year. Maybe by next season I'll have a gun in my kayak and they won't be the only ones taking warning shots. I wonder if a reciprocating cordless saw has ever been entered into court evidence as a self-defense weapon?

(photo by the author)