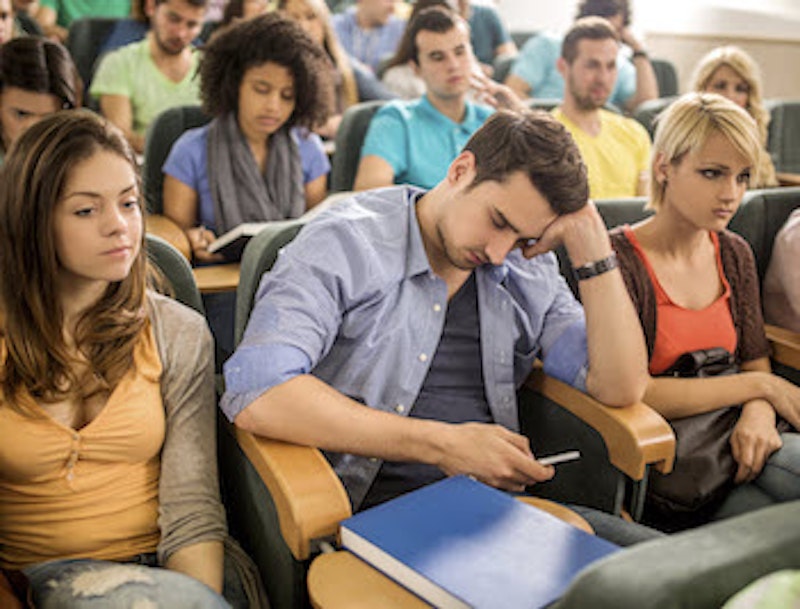 Micah the Graduate Student walked, or, more accurately, slouched with a quadriceps-heavy gait earned from a lifetime of inactivity, to the lectern to give the opening lecture for the standalone Introduction to Knowledge course he was teaching. It was the first course he’d ever taught on his own—all his previous experience had been as a Teaching Assistant or “TA” for the eminent Professor Jonas Ruggleteapot—and he intended to own it.

Sure, Ruggleteapot was the top dog in the field of Knowledge. Very few people knew as much as he did, and Micah understood that he wasn’t among them. He also understood that he was young and fresh-faced, a mere 43 years old. Unlike Ruggleteapot, who couldn’t care less if the students listened to his tedious and half-assed orations, Micah would connect with the students. They undoubtedly had much in common with him, like the ability to make snotty comments about sketch comedy shows from a decade ago, a love of political hot takes written by underemployed social media socialists who lived and worked in trendy enclaves of fashionable cities, and an affinity for the “indieground” jangle-noise-bubblegum rap collective Reek Bonut and his Constipated Exploders.

Micah was so confident of this last fact that he decided to complement his too-hip-to-be-square carpenter jean capris—into which he had spent the better part of a half hour thumbscrewing his bloated midsection and slack, deflated buttocks—with a t-shirt bearing the graffiti art logo from the Constipated Exploders’ “secret” 2008 remix EP. This would be amazing. He was going to be right there with the kids, thereby proving to himself that he was the relatable and interesting and “with it” teacher he never had.

Upon reaching the lectern, he spread out his notes and pretended to study them. He glanced up a few times so that he could shoot the students his sharpest, Jim Halpert-style “I’m in on the joke” looks. After several minutes of this, he cleared his throat and prepared to deliver the series of coruscating witticisms that, when offered in the course of discussing the contents of his 26-page, single-spaced syllabus, would endear him to these students for the rest of their natural lives.

“Uh, um, if you could… would you mind…” He trailed off, looking confused and scared. Even though the class had just started, most of the students were already fiddling around with their laptops and smartphones. Three students in the class of 20 were asleep. One student, seated adjacent to the door, was eating heaping handfuls of potato chips from a king-sized bag of Lay’s while having a pleasant conversation with a person or persons outside the room.

“Could you, er, does everyone…” Micah continued, struggling to compose himself. “Do you have your syllabuses, er, syllabi? And the textbook? Do you have the textbook? Does every when of you, uh, I mean every one of you, have it? The textbook? Class is, it’s starting… Can we say—can we see, I mean—if you have what I’m asking? Let’s start class, if, uh, you’re feeling it, and maybe talk or rap or chat some about the syllabus. Are you down with that? I want you to know I’m welcoming and safe for all the identities... er, ways of being. Is that appropriate and cool to say? I mean I’m a safe space, inside me is safety. No, no, scratch that. This room is a safe space and we’re inside it, being real. Do you feel okay or real? It’s, uh, okay to feel real. So the textbook, well, let’s get it out and we can rap some about it, if you’d, uh, what was that page, I know I marked it...”

From what I read on professorgrader.com I thought this guy would be kind of cute, but he’s not. I don’t like his voice all that much, either. It sounds like he’s talking with a mouthful of water while a bunch of mothballs are rolling around in that water. And what’s with his shirt? It’s so tight and you can see his weirdly-shaped nipples.

Ugh, that makes me think of Brian with his inverted nipples. Why hasn’t he called me back? His party last Thursday was so nice. He didn’t call me his girlfriend, though, when he introduced me to Oscar. Or was that guy’s name Ohvuh? I should follow him on Insta. No, he’d get the wrong ideas. These guys and girls all get the wrong idea. The guy in the back of the class, the really tall guy, he’s kind of cute. I think he’s on a team. That’s sort of gross but also sort of hot, I guess.

There’s a party thing at Camden Camden’s next week but I don’t know if I like things all that much, especially party things. What is with all this stuff about the syllabus? We have the syllabus. Wait, he’s asking people to read from the syllabus? Is he going to do that for three hours? I have $70,000 in student loans right now. Oh god. I’m pretty sure his name was Oscar. It bothered me about the girlfriend bit. We’ve been doing whatever for three months and he doesn’t even say I’m his girlfriend. Fuck him.

I guess I shouldn’t care so much because it’s just a college thing. Why am I paying for this stupid asshole to talk the way he’s talking? I can’t even hear what he’s saying. And why is he saying there’s an attendance policy? The attendance policy is “on our honor” and he thinks “most learning happens outside the classroom?” What a tool.

I can maybe defer the student loans if I go into the Peace Corps. I remember hearing that from somebody, or maybe I made that up. Isn’t that what Camden Camden is doing? No, that’s too many years and I want to get started with my real life. I want to be having my real life right now. A family and some cute puppers. Not sitting in this class, though I guess I don’t have to sit through it because the attendance policy is “on my honor” and whatnot.

Maybe I should do a study abroad term at Oxford. Or in Paris, which is even more cultural. It’s just another loan but it would be the experience of a lifetime. You get just one lifetime and you can only have so many experiences of that lifetime. You have to do it while you’re young, and I’m still young so I should look into doing it. Or possibly an internship for the professional experience, like for a sports team I like.

Camden Camden did that publicity internship for the Cleveland Spartans and she got to meet “Herc” Broadsides. So cool! Wait, what happened on If I’m Lying I’m Dying this week? I know they killed one of the lying dudes, but I hope it’s not the dude I like. It’s cool watching the dudes die after they lie to the girls, though. TV is so real.

It’d be nice to make a difference, now that I think about it. But in the Peace Corps? Most of those countries are so hot and I’d just burn up. I don’t even like all this humidity today. It’s awful for curly hair. How about Teach for America in, like, San Diego or San Francisco? Cultural spots that need a little help. I know there are a lot of derelicts and bums in need of a good shower in San Francisco, because I saw and smelled them on my trip a few years ago. People who need their consciousness raised. That could be a good life plan, which I definitely need to have.

I’ve seen movies about teaching where the teachers make a difference. I wouldn’t be like this fucking idiot. I’d connect with the students. I’m so relatable. This goofball, you can’t even hear him and when you do it makes you want to stuff cotton in your ears. I’m only 22. And my younger brother, he’s 20, I get him. We’re totally against chill, and we talk about rap music and Snapchat. We’re on the same page. Ew, this creep’s nipples are like vibrating a little when he moves his hands. Three more hours of vibrating nipples. FML.

J. P. Crackerjack, who was a big deal on the varsity baseball team, reclined the polypropylene back and stainless steel legs of his chair against the wall as he prepared to suffer through another bullshit class. Several rows in front of him, a pencil-necked, weak-chinned geek wearing tight high-water carpenter jeans mumbled something about having a syllabus or needing a syllabus or wanting a syllabus.

Crackerjack, who’d never done so much as a Tootsie-Pop lick of schoolwork, looked outside the window and thought about how nice it would be to have some random person, ideally a bum or drifter, perform a sex act on him. It was a humid day, but pleasantly so, and the idea of a warm toothless mouth gently suctioning his nether regions filled him with the sort of joy one assumes that a Kentucky colonel would derive from sipping a mint julep or black-eyed Susan when faced with similar weather conditions.

The lecture was being given so sotto voce that Crackerjack could discern only the “uhs” and “ums,” sounds that he quickly incorporated into his gripping fantasy. With the slow passage of time—this was an evening class, and thus three excruciating hours in length—he forsook standard anatomical proportions in favor of outlandish, exaggerated details. Crackerjack’s phallus tumesced to seven feet, then 50, then one million. Somehow, it remained possible for the crew to continue their labors, with the increased size of his manhood enabling the entire queue to work in tandem.

At one point, he sprouted nine more phalluses that all ejaculated or “jizzed” continuously. The sex-crazed participants’ interest in the giant phalluses never wavered despite the fact that the task of pleasuring Crackerjack was proving as intractable a problem as untying the Gordian Knot or resolving the conflict over the Golan Heights. Crackerjack’s sole regret, which occurred to him as he tried to sink deeper and more completely into the greatest daydream of his life, was that he’d neglected to pack a couple of honey buns to remedy the excruciating “case of the munchies” caused by excessive 420-friendliness.