On two tiny streets in the heart of Greenwich Village, both named for the brook that originally arose in Midtown in the Madison Square area. 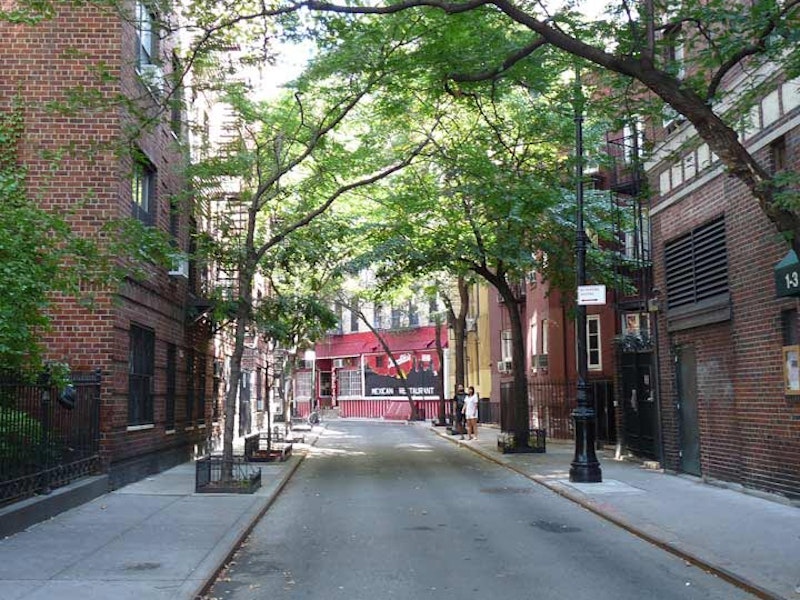 New York City streets that run in old waterway courses are relatively few and far between. The most famous is Canal St., which was built in the early-1800s on top of a canal that was built to drain out the old Collect Pond in the Foley Square area; there are others, such as Brook Ave. in the South Bronx, tracing the Mill Brook of Morrisania; and Justice Ave. in Elmhurst, Queens, which ran alongside Horse Brook. Most of New York City’s streams and ponds have been long subsumed underground or channeled into its sewer system. Engineer Egbert Lodovicus Viele (an avenue in Hunts Point, Bronx is named for him) was originally tapped to design Central Park, but that plan fell through; his 1865 map of Manhattan’s now-underground streams is still used by developers, architects and engineers.

Today I’m discussing two tiny streets in the heart of Greenwich Village, Minetta St. and Minetta La., both named for the brook that originally arose in midtown in the Madison Square area (5th Ave. and 20th St.) and meandered southwest through Washington Square and draining into the Hudson River in a marshy area at about Houston St. In the colonial era, it was known as Richmond Hill; in a grand dwelling built by British Army Major Abraham Mortier, George Washington made his headquarters during the Revolutionary War and John Adams and Aaron Burr later made their homes.

Minetta Brook was mostly moved underground by 1830, but other than the two lanes named for it, it still makes its presence felt in Manhattan. Some property lines are still angled to mark its passing, and a fountain at #2 5th Ave., just north of Washington Square, used to occasionally fill with Minetta Brook water, though it seems to have dried up (the fountain, not the brook) in recent years. The name of the brook was originally a Native American word, manette or “devil water” and the term was filtered through Dutch as Mintje Kill from the Dutch word for “little “plus a diminutive term (from which English gets its “-ie” as a familiar or diminutive suffix) and kill, stream.

Both Minetta St., which follows a curved course matching the stream between 6th Ave. and Minetta La., which runs straight from 6th Ave. to MacDougal St., were on maps by the 1860s, but they were often rendered with nonstandard spellings like “Minetto” before cartographers settled on the current spelling by 1875 or so. When Minetta St. was first a pathway, the brook may have flowed alongside it and Minetta La. may have bridged over it, but all of the stream had disappeared underground by the 1860s.

The Minettas had become an African-American neighborhood before the Revolutionary War, as Dutch landowners released their slaves (for a time the immediate area was called “Little Africa”), who settled in the region (the first Catholic church with a Black congregation was built nearby in the 1830s), but by the mid-1860s the corner of Minetta La. and St. was a ghetto described vividly by Stephen Crane in his Minetta Lane short story in 1897.

The above photo shows Minetta St. looking north from 6th Ave. at Bleecker. The street presently has a mix of apartment buildings as well as three- and four-story multi-family buildings mostly built in the early-20th century, with some exceptions. New Bishop Crook lamps were installed on both Minettas a few years ago. 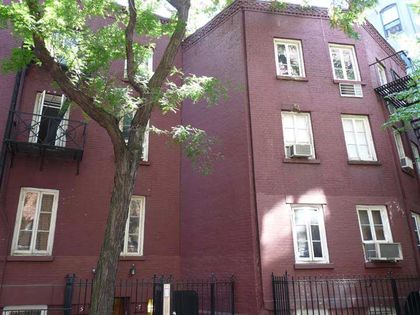 #5-7 Minetta St. are neat three-story brick apartments built with angles to tuck into the oddly-angled intersection of Minetta, 6th and Bleecker. One of the apartment exteriors was used for the 1972 biopic Serpico. Frank Serpico himself lived elsewhere in Greenwich Village. #7 is reached by walking through the vestibule of #5. 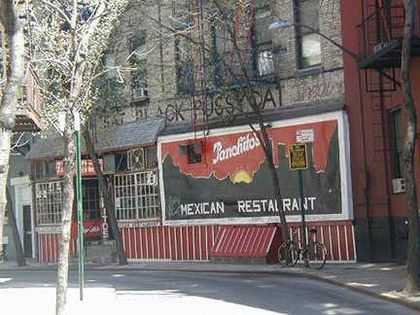 For two years, Mexican restaurant Panchito’s was the Fat Black Pussycat Cafe (1960-1962), where according to legend, Bob Dylan composed “Blowin’ in the Wind.” In the mid-1960s Fat Black Pussycat decamped to nearby 130 W. 3rd St., where it replaced Jack Kerouac hangout Kettle of Fish, which, in turn, moved to Christopher St. where it replaced the Lion’s Head, home away from home to dozens of prominent journalists such as Breslin, Hamill and Mailer. Up until just a few years ago, the ghost sign for the FBP could still be made out above the Panchito’s sign (this photo is from 2003), but that was finally erased by the Panchito’s management in 2011; the Mexican place has been here since 1972. 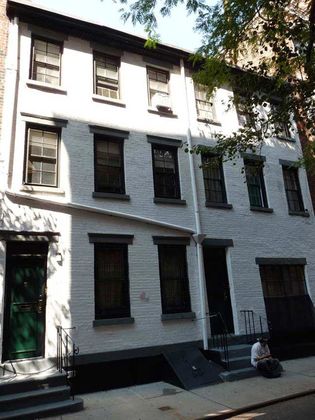 #12 and #14 Minetta St. are the oldest buildings on the west side of the alley. The rest is occupied by apartment houses that went up between the 1920s and 1940s. These two could be as old as the 1870s, though they’re probably not quite that aged. #12 has an original pair of first-floor windows while the pair at #14 has been modernized and combined. 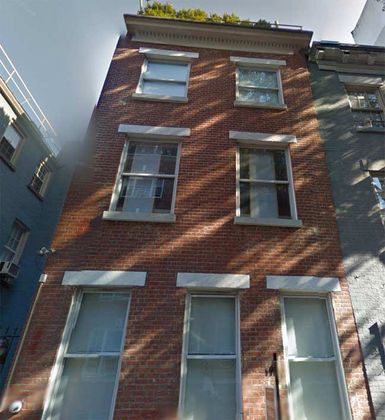 Since Minetta St. is narrow, it’s hard to photograph a building there in its entirety. #17 may be the oldest building in the alley, as it was built in 1840 by developer David Louderback, who also built homes around the corner on Minetta La. (see below). In the 1920s, these homes were redeveloped by Italian immigrant Vincent Pepe, according to the late Christopher Grey of The New York Times; Pepe hanged himself in one of the buildings he owned elsewhere in Greenwich Village after an apparent financial downturn. 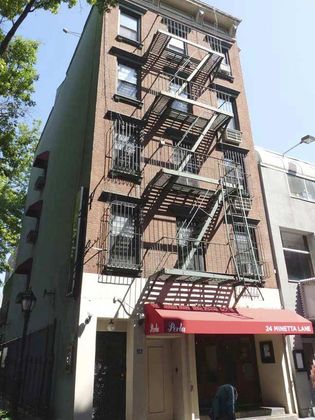 Unlike Minetta St., Minetta La. runs a straight course between 6th Ave. and MacDougal St.. Older maps show it crossing Minetta Brook, and I wonder if the brook was underground by the time Minetta Lane was laid out, or if there was a bridge those first few years before the brook was redirected underground.

Like most NYC streets above Houston, house numbering goes from east to west to the west of 5th Ave., so the higher house numbers on Minetta La. are closer to 6th Avenue. #24, a five-story walkup that looks like it was built in the 1900-1915 era, has had an Italian restaurant on the ground floor for awhile and in 2015 it was Perla. 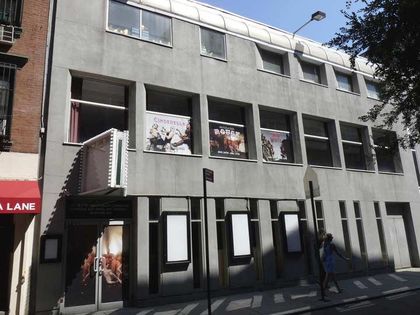 It might be a notion that the Minetta Lane Theater at #18 has a lengthy history, such as the Cherry Lane and Lucille Lortel Theatres. It has been here for over 30 years, in a converted tin can factory that later became home to a printer, but a renovation completely “blandified” the exterior so its many years are unrecognizable. According to Playbill, the theater has housed critically appraised and successful productions over the years such as Balm in Gilead; Other People’s Money; Marvin’s Room; Eric Bogosian’s Pounding Nails in the Floor; Gross Indecency: The Three Trials of Oscar Wilde; Jeffrey; Marvin’s Room; Cowgirls; The Last Five Years; Cookin; Alan Bennett’s Talking Heads; My Name is Rachel Corrie; Adding Machine, A Musical; and Garden of Earthly Delights. 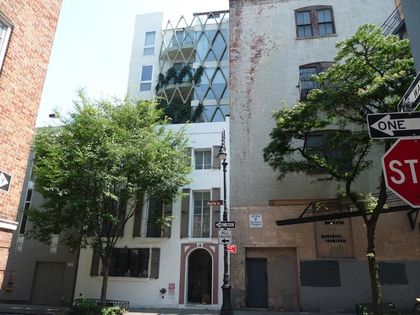 Dwarfed by surrounding high rise buildings, #16 goes back to about 1900; note the differently-sized windows on the second and third floors. Its eccentricities have also been smoothed out by renovations over the decades. Adjoining it to the right is the back end of the Minetta Garage, which (illogically) fronts on W. 3rd St. 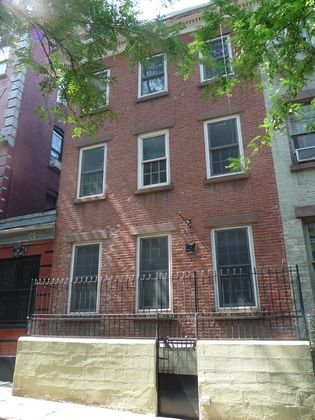 On the south side of Minetta La., east of Minetta St., are three of the oldest buildings on either Lane or Street, #5, #3 and #1 Minetta Lane (seen here), built by developer David Louderback as a trio of neat thee-story brick dwellings about 1840 and renovated by Vincent Pepe in the 1920s (all three buildings have a common back yard). They have seen Minetta La.’s “Little Africa” period, its descent into ghettoization and its 20th-century revival. 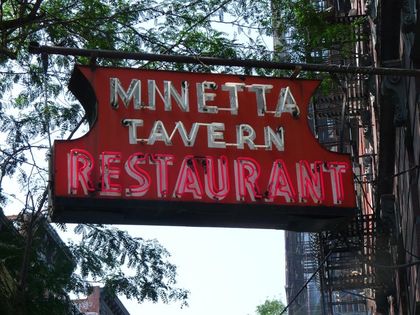 The Minetta Tavern has held down the SW corner of Minetta La. and MacDougal St. since 1937, but it had operated as the Black Rabbit speakeasy before that in the Prohibition era. From its early days, the Minetta was a writer’s bar and counted E.E. Cummings, Ezra Pound and Ernest Hemingway among its customers, which also included The New Yorker’s Joseph Mitchell and his discovery, wild-eyed homeless bohemian Joe Gould, who imitated seagulls and bamboozled Mitchell into believing he was producing a multi-volume, the “Oral History of Our Time”; in the end, it amounted to only a few notebooks of Gould’s scribbled imaginings.

In 2008, restaurateur Keith McNally reopened the Tavern not as a neighborhood watering hole but as an upscale, expensive French restaurant. One thing hasn’t changed, though: its hanging neon sign. 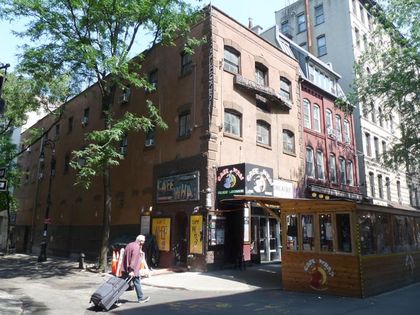 Players Theatre and Cafe Wha? share the building at the NW corner of MacDougal and Minetta La. Manny Roth (1919-2014) opened Cafe Wha? in 1959 in the basement of a garage constructed in 1905 that had previously been a horse stable; the trough once used for horse dung was still there. Roth converted it into a coffeehouse and performance space. When Bob Dylan arrived in NYC in 1960 he was employed as a harmonica player and had his first paying gig as a folksinger here in 1961. Mary Travers was a waitress here before becoming part of the trio, Peter, Paul and Mary. In the 1960s, Woody Allen, Bruce Springsteen, Jimi Hendrix, Lenny Bruce, Bill Cosby and Richard Prior all performed here early in their careers. The Cafe originally closed in the late-1960s, but it reopened in the 1980s under a new owner.