I Gave at the Virtual Office

The beggar must not only petition but perform; he must appeal to our generosity while making us laugh and cry. 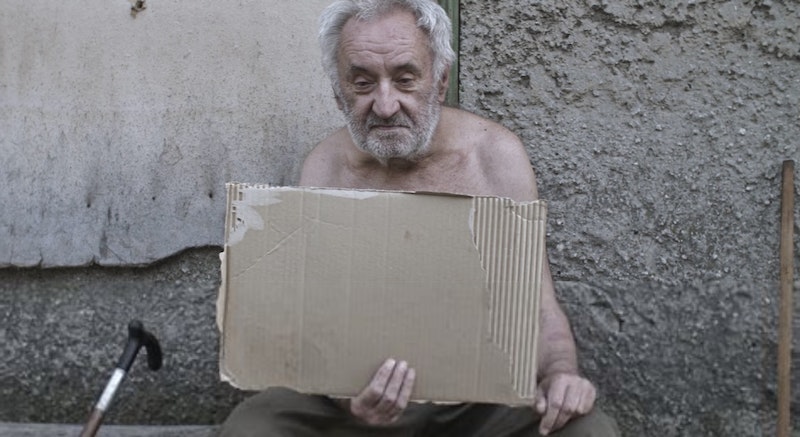 Both worlds are cruel but not unusual, given the dissolution of communities and the corruption of charities. Both worlds are one giant amphitheater for the mauling and humiliation of human beings, of barbarism with a virtual face. Both worlds look different but share the same outlook: that the beggar must not only petition but perform; that he must appeal to our generosity while making us laugh and cry; that he must make us believe we’re wise and good, with malice toward none, as he competes for our affection.

Thus does the beggar, a one-man band of jangling discord, kneel and pray before performing. He performs by praying, treating every apostate as an apostle, for the beggar must not only treat every man as a king but honor the divine right of kings. His act is the result of distance, of his separation from us, and of our decision to separate ourselves from that which we see every day: a Bonus Army of the ill and infirm along Veterans Row, of homeless encampments bearing the American flag instead of buildings flying the flag, of a portrait of defeat instead of a painting of an avenue in the rain.

The flags fade in the sunlight of truth, draping tent cities in Los Angeles, San Francisco, and New York. The flags wilt in darkness, too, revealing certain truths about the nation’s capital—that Congress should lower the flag, not because of lies about an attempted coup inside the U.S. Capitol, but because of an inconvenient truth outside the Capitol.

The truth lies in our aversion to strangers in our land, despite the fact that we’re all strangers in a land of digital nomads. The truth is, we’re all stateless people in a no man’s land of fake friends and followers. The beggar accepts this truth, which is why he trades his cardboard sign for a web page. He is his own publicist, photographer, copywriter, and videographer. And yet we reject him with ease.

Rejection is the emptiness of the online world, coarsening life and consuming liberty. Rejection is also the power to cancel people, turning them away without returning their data. Rejection is ruination by numbers, not redemption in Numbers, supplanting acts with words and the Word with words of doubt.

If rejection is the beggar’s fate, let him leave in dignity.

Don’t make him beg for kindness.