Learning to ride is a process of growth. 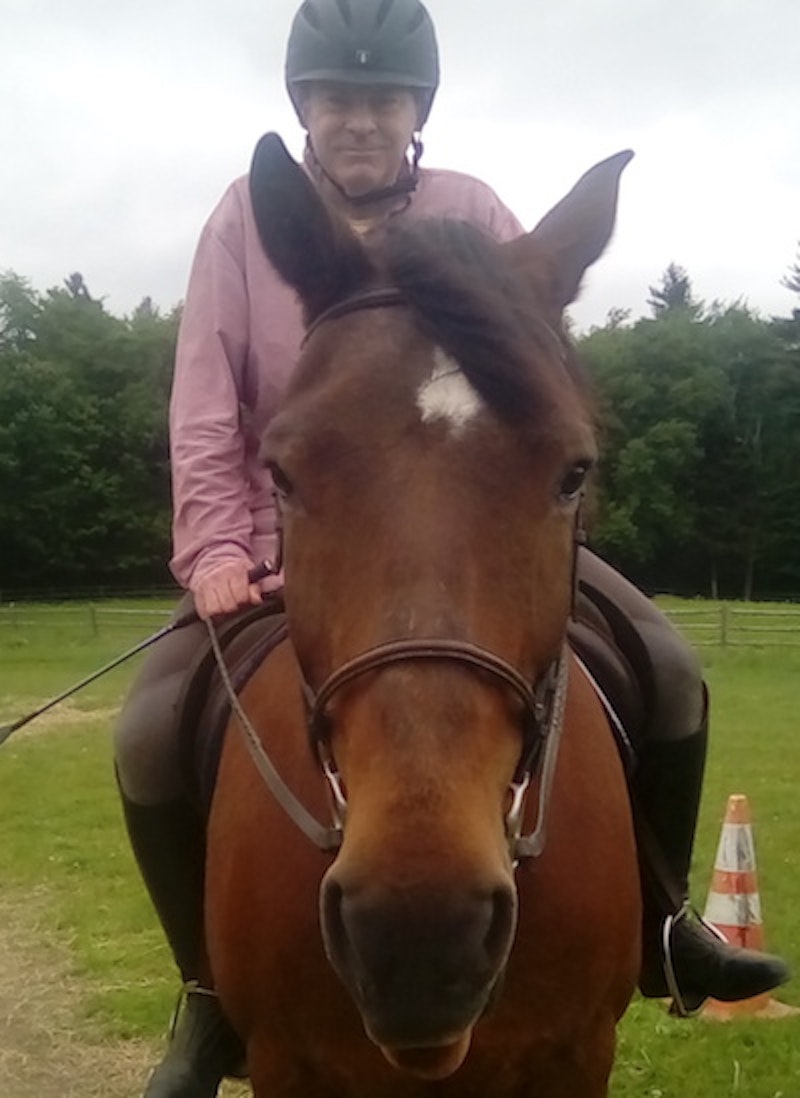 I’ve been learning to ride for 18 months now, working with Dorothy Crosby and Julio, one of her horses. One of Dorothy’s interns, while conducting a lesson said in passing, “You’re not an inexperienced rider.” I reflected on this. Julio has stepped on my foot, walked backward when I wanted him to go forward, and so frustrated me once while I was trying to turn him that I leaned too far, lost my balance, fell from the saddle, and, as the British say, had the ground come up to meet me.

Yes, riding Julio has been an experience.

Last month, I caught Julio fairly quickly. Carrots are a good bribe, and I’d brought enough to give at least a few to Dorothy's three other horses. After grooming him and putting on the tack, Dorothy asked me to mount without first placing my left foot in the stirrup. This would be a first step toward learning to mount from the ground, without a mounting block. I stood on the mounting block and tried to throw my right leg over Julio's back. I was insufficiently agile to do it. I’ve already begun stretching exercises. I have to be able to mount from the ground.

The ring was still muddy (mud season had only just ended and the ground had not yet dried), so we went up and down a dirt road on her property. We spent a lot of time at the trot that day. I'm able to turn him within his own axis. That means I've begun absorbing Dorothy’s teachings about communicating with my horse through the body. Now I’ve to learn how to maneuver a horse precisely, in a tight square with sharp corners.

During the following week’s lesson, after mounting Julio, I helped Dorothy readjust the girth. I threw my legs forward, one at a time, and reached down for the appropriate straps on each side of the saddle. I walked him around the ring and after a few rounds took him to the trot. Despite the usual difficulties, there were some moments when he was magnificent, mane and tail flying.

A week later, Dorothy knotted the reins so they wouldn’t fall from Julio’s neck. Then I took him to the trot, posting (i.e., rising in the saddle in rhythm with the horse) without holding the reins, my fists punching the air in rhythm with my posting, and steering by pressing my legs to his sides. It’s classical cavalry training. It was the first time I’d done this and I found it intensely satisfying.

Dorothy told me that she was lending Julio to a friend who runs a Vermont stable specializing in therapy horses for emotionally troubled children. According to his dentist (yes, horses have dentists), Julio’s teeth show that he's closer to 30 than 20, which makes him pretty old for a working horse. Also, while he's become dissatisfied with being ridden by aspiring horsemen, he’s trained as a therapy horse, loves children, and they love him. I’ve watched him cooperate with them, follow them from the barn without difficulty, and provide them a safe, gentle ride. One child observed, “He’s just like riding a sofa.” He’ll be an excellent, patient therapy horse.

As Dorothy spoke to me, I was grooming Julio after a lesson. I paused to listen. When she’d finished, I replied, quietly, "I am very fond of him. I want him to be happy." She replied, "I know that."

So in mid-July, after Julio’s departure for Vermont, I will begin working with another of Dorothy’s horses, Toby. That’s his barn name. He’s a registered thoroughbred born in 1994, by Vicksburg out of Noble Dream Maker. According to the records of the Jockey Club, he’s descended from Nashua and Native Dancer, two of the great racehorses of the 1950s and 60s.

Hence Toby’s formal name, taken from those of his parents: Noble Victory. Magnificent, I thought, and smiled.

What have Dorothy and Julio taught me over the last 18 months? Dorothy patiently taught a 62-year-old man the basic elements of riding. She advanced me toward new challenges when I was ready for them. She showed profound insight into my capacities, both intellectual and physical. She gently guided me from utter ignorance to marginal competence. My conclusions from working with Dorothy are: Learning to ride is a process of growth; riding itself is a way of life, not a goal to be checked off on a list.

When I began my lessons and writing about my experiences, I quoted a British cavalryman that, with infinite patience, one can master any horse. I now believe the Englishman was half right. With infinite patience, one can learn to work with any horse. Riding’s a collaboration based on mutual understanding, which requires the rider to know how to clearly communicate his wishes to the horse. If he can do that, the horse will gladly comply.

As for Julio, I knew from day one that he was intelligent. Over time, I found he possessed complicated emotions and considerable discernment. Perhaps what humans dismiss as instinct in animals is, in fact, a highly developed hereditary common sense. And I sometimes sensed what in humans we might call a wry sense of humor.

In Gulliver’s Travels, Jonathan Swift has his hero live among the Houyhnhnms, wise, civilized talking horses. Swift may have had better insight into the equine character than we think.

My adventures with Julio became an exploration of my temperament and character. When I realized I wasn’t physically fit to ride, I began working out at a gym four times a week. In some things, I’m a slow learner. I still don’t consistently get the tack—saddle, bridle, reins, pads, saddle, and girth—correctly in place, something I have to master for the good of the horse and myself. I still lean a bit once I’m in the saddle. Like my other known flaws as a rider, I’m working to overcome them. I candidly admit to myself and others my errors and ineptitudes so I may overcome them.

On the positive side, I found my patience with Julio almost inexhaustible, far greater than it is with some people. I freely admit that, from time to time, he did inspire certain short, crisp vulgarities, uttered in soft tones, including sukinsyn, the Polish canine epithet I learned from my father. To a Pole, it’s a kind of left-handed compliment suggesting the object of the insult is a really tough guy.

I often laughed at his misbehavior, even while pressing his side, shortening the reins, and pulling his muzzle nearly to my knee as I fought to make him turn in the direction I’d chosen. He always had my respect; his obstinacy and independent spirit inspired affection.

Finally, I was a natural barn rat, gladly willing to do the necessary maintenance: properly and thoroughly grooming the horse for his health and comfort; collecting the hair, manure, and urine from the floor; thoroughly sweeping the barn; and carefully cleaning the tack. It’s how my father taught me to do such things.

On July 3, the day of my last lesson with Julio, the weather was bestially hot—91 degrees—and humid. I agreed with Dorothy that riding him under these conditions would be wrong. Instead, we walked together. I kept in step (left-right, left-right) and guided him in a zigzag pattern along Dorothy’s dirt road, not by touch or pressure, but by shifting my focus—my eyes, face, and navel—towards my goal. He responded easily. But the horseflies were as harsh as the weather. At several points Julio used me as a scratching post. This included an unintentional slam to my head with his muzzle that made me grateful to the good people at Tipperary Equestrian who had made my riding helmet.

Then I groomed him for the last time, thoroughly washed him with shampoo, liberally rinsed him with cool water from a hose, scraped off the excess water, and put on his fly mask. I led him to the paddock and removed his halter. He fell to the ground within seconds and rolled around in the dirt. So much for the shampoo.

I cleaned the urine-soaked straw from Julio’s stall and tossed it onto the waste pile outside. Dorothy sprinkled the damp floor with lime to counteract the effects of the urine on the wood. Then I swept the barn, put the broom and manure rake back in place, and walked outside.

Julio was about 200 yards away, grazing in a far corner of the field. I walked to him. He turned to me. I said “Hi there! Want a carrot?” He stepped forward and lipped it from my hand. I gave him four more, one at a time. I stroked his neck, murmuring, “Thank you for everything. Take care of yourself. Goodbye.” Then I turned and, without looking back, strode to the stable.