I won't choose sides or vote for the lesser of two evils. 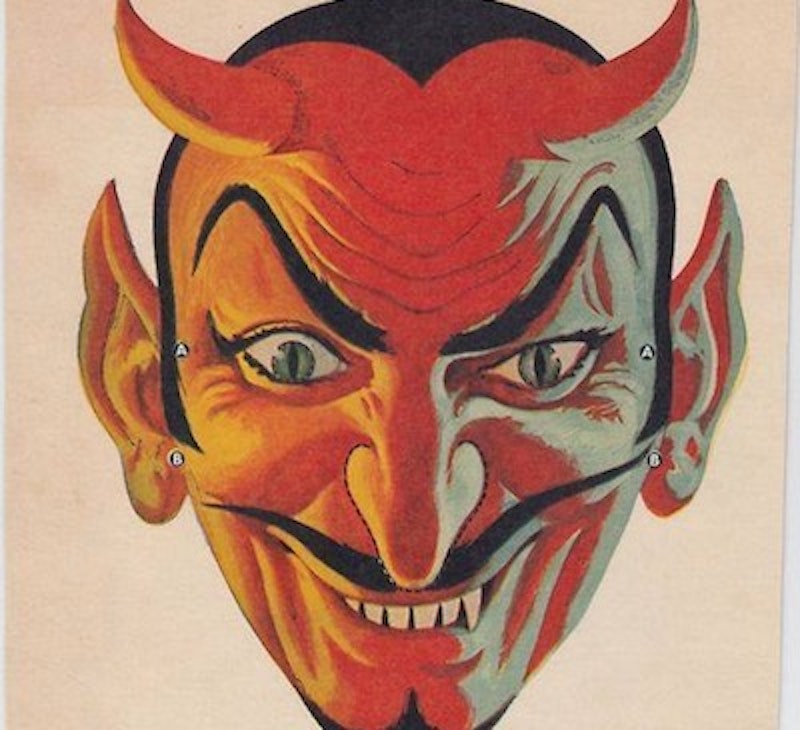 The eternal battle of exact opposites. A constant struggle for triumph or bitter defeat in vying for position. Jockey the ying against yang of good to not-so-bad. The personification of unadulterated evil embracing the wholesome righteousness of all that is fair-to-middling. Like USDA Grade A bullshit. The world we believe to exist in the struggle for better or worse is an eternal battle of our soiled souls. Everlasting afterlife of total damnation in a flophouse low-rent hell of our own making or some two-bit heaven of reward by the grace of an all-forgiving god. Angels and devils interconnect and shadow every move. Flowing together in a direct sewage pipeline of lovely hate. Can't get enough of that funky stuff. It's a crapshoot mixtape of attraction and repulsion.

I don't know who's more popular, the gods or the devils. It's a toss-up, coin flip, and two out of three. Jesus, Satan or me. We can't all be winners or losers on any given day. It all depends on how you play the stupid game. If I had to choose a team I'd be hard pressed to pick one or the other. These days God’s team seems to be winning, although in cahoots with the devil. Like they work together to make our lives a living hell/heaven on earth. In a popularity contest, the devil edges out god for sheer coolness. Modern times dictate we must try to be happy in our constant misery. More wrongdoing has been perpetrated in the name of god than any perceived evil upon the face of creation’s constant calamity.

I won't choose sides or vote for the lesser of two evils. It's the same ball of wax without a chance in hell for forgiveness in heaven. Redemption’s in the eye of the beholder. Retribution is the order of the day. Praying for health and well-being to an unfeeling god is like asking for another drink after last call. The devil doesn’t give a damn how you live your life. The notion that god cares less for you than your own mother. And she could be jiving you too. If you're a saint today or sinner tomorrow, it means little to evildoers. They’ll dole out their punishment for your indiscretions. The way to handle living a life with or without a world of sin and eternal damnation.

The devil was originally an angel who pissed off god and was banished from heaven to dwell forever as the king of darkness in the shit fire and brimstone of the underworld. A forlorn place of constant sorrow where old clueless white dudes play the blues 24/7. A surrealistic Hades where a guy wearing an Orioles cap named Ralphie sells piss-flavored snowballs in the third ring of hell along with ice water, refrigerators and snow shovels. In a hell where people shake your hand promising everything, delivering nothing, while bullshitting and smiling at the same time.

Those who say hooray for me and fuck you to you. Those who hide behind god while espousing hatred, pushing a secret agenda of white-deviled superiority like it's a valuable commodity. Sports fanatics, so-called beautiful people, tanned Hollywood types with bleached teeth and Botox smiles. Doctors who play god slinging silicone tits and ass like some diner lukewarm hash brown potatoes. Kids playing house. You show me yours and I’ll show you mine. Innocent mommy and daddy games. You can touch it if you're gentle. This is what got Adam and Eve kicked out of the Garden of Eden. Lucifer was a snake in the apple tree. He told them that god loved them and wanted them to eat forbidden fruit. Yeah, right and I’m the president of the United States. To be judged by our own worst enemy. No fucking red MAGA cap wearing, tiki-torch bearing, hatemonger cross burning white devil whistling Dixie will darken the days ahead without some bitchin’ payback.

Imagine hell is a lot like when it gets so hot you can fry an egg on the sidewalk. Like hell, it's a heat wave. Delirious from heat stroke and dehydration. It’s so hot your brains bake. Believe sugar is sweet and shit stinks. While your head spins and nausea prevails. The evil inside us is soft and squishy like unwanted cellulite. Run with the devil or the devil may care. The devil is never in the details of deviled eggs, devil’s food cake, deviled ham or a façade of the handsome devil. Playing the devil’s advocate on a fiddle as the city burns. A silver-tongued devil sings a dirge of the dark sides charming allure. Pass judgment to the human suffering of the stockpile of sick hearts and damaged souls. Condemn the self for the benefit of bigger brethren. All ye who enter abandon hope.

The despicable enemy we love to hate. It’s merely us gazing to the heavens or bowing our heads downward toward hell. Hale, healthy and holier than thou. To rage and rally against the evil men do. Virtue’s at stake in the sphere of loving your enemy. Turn the other cheek. Kicked in the head. Stabbed in the back. A Christ-like apparition of bruised egos and blind justice. Take no prisoners on the highway to hell or hold hands up the stairway to heaven. Beware the devils but be very wary of god too. Only you can prevent the fires of hell or heaven on earth.