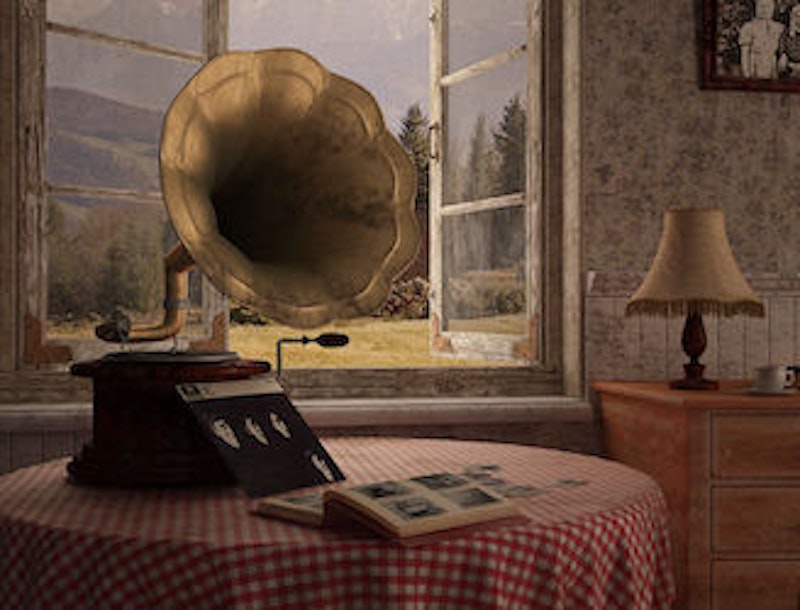 The robust thumping of a string bass sounds over the yard of a rural homestead in Indiana. Now comes the shuffle of a snare, and the merry tinkling of the pianist in the orchestra of the legendary Paul Whiteman. Next, Genius imposes itself in the melody of a divine cornet. It’s the cornet of one of our authentic American cultural heroes, a prodigious son of the corn country of Davenport, Iowa. It’s the tremendous cornet of the immortal BEIDERBECKE.

But wait. The scratchy old recording reaches its end. After a moment’s silence there sounds the syncopation of a rhythm combo, vibrant with the energy of Old New Orleans, in particular the colorful precincts around Congo Square. Did I say New Orleans? I might just as well have said Old Africa, in its simpler days: the days of joyous dance, and carefree pagan worship. It’s that joy that saturates the blowing of this horn player, one who is much more virtuosic, if less elegant, than the first. His name: mighty SATCHMO.

Silence again. Then the needle drops for a third time. Again music, glorious music, pounds out of the window into the yard, ennobling (to some extent) Mother’s feeding of the hogs. Yes, Mr. Harris has slapped another of his vintage 78s on his lovingly preserved phonograph. Over the grunting of the pigs as Mother manhandles them comes the life-affirming piano of the noble JELLY ROLL.

Yes, I do love my vintage “sides,” as we collectors call them. I listen to them at evening, during Mother’s chore time, and am reminded of the bounty and generosity of the Lord, and of humanity’s occasional ability to rise to its best nature, expressing the mystery of life in joyous song, broadly defined.

Meanwhile, a committee of the Russian Duma has outraged Western liberal opinion by recommending that foreign journalists working in Russia register as foreign agents.

Good heavens. Shouldn’t American journalists in Russia be able to subvert their host country and destroy its people with impunity? The Russians have nerve.

One interesting thing about the outcry from American journalists is how disingenuous it is. They really would have us believe that the “illiberal” Russians (“illiberal” is currently the worst epithet it’s possible to utter in American journalist circles) are motivated here by an authoritarian impulse—a culturally determined distrust of free speech.

Some of us know better. Some of us are familiar with the long tradition in which Western news outlets have served as propaganda outlets for anti-Russian initiatives. I’m not even talking about the Western media worship of the Ukraine’s ruling Maidan Nazi Junta. Some of us were reading The New York Times towards the end of the Soviet era, when that paper was obsessive in its advocacy of a Baltic independence movement that was synonymous with anti-Russian racism, and that ended in one of the great tragedies of the 20th century: the stranding of millions of Great Russians in ultra-nationalist Baltic states in which these Great Russians are treated much like the Jews of Vichy were.

We also know that the English-language newspapers that proliferated all over Eastern Europe and the former Soviet Union in the early 1990s were CIA front organizations dedicated precisely to serving Zio-American imperialism and inculcating its liberal, Russia-hating “values” among a youthful local readership that, for better or worse, considers fluency in English to be prestigious (“hip,” as I understand young people put it these days). Was the English-language Moscow Times not a CIA/Mossad project? What about the Kyiv Post? Or the Prague Post? The Baltic Times?

The whole topic is one that they’d rather people didn’t notice. It’s inconvenient; it gets people thinking about the wrong things; people should be thinking about “checking their privilege,” or transitioning to another gender, or some such, rather than about the perfidy of Zion; it lets the cat out of the bag. Is there nothing more gauche, more vulgar, more immoral, more downright contemptible, then the foul and reactionary business of noticing reality in the conditions of totalitarian liberalism in which we now live?