He danced a jig. 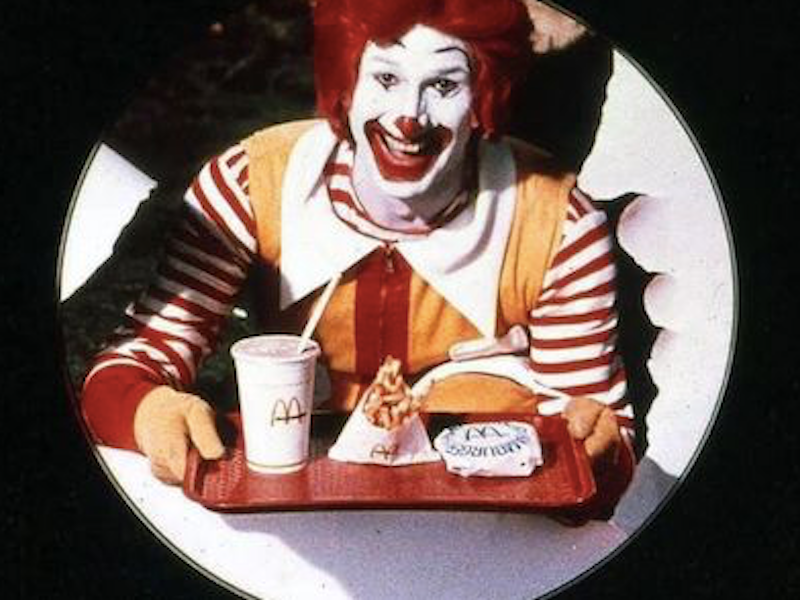 The school bus, repainted Day-Glo lime, bounced along Highway 1. Inside were 18 young female members of Vindaloo Krishna, a splinter group of the larger Hare Rama Puranas, it a splinter of Krishna Krishna Devanta. The bus interior reeked of incense, sweat and patchouli. Finger cymbals and chanting filled the air. All the seats were removed. At the back was a walled-in office. The floor was covered in grubby mattresses and oversize pillows. They'd left Los Angeles three days ago, taking their time, loping, and were north of San Francisco. Trixie was renamed Santouchie, but she couldn't help but still think of herself as Trixie. Like everyone on the bus, her hair was shorn and she wore a saffron robe and a pair of flip-flops, bought by the dozen, one-size fits all. The exception was their leader, middle-aged pot-bellied Bhagavadgita Dondish, a.k.a. Baba Don, né Donald Siegel. His robe was tailored silk in a subtle shade of rose, his dyed hair and beard luxuriant. And he sported a pair of finely-tooled sandals imported from Spain. A bulbous red nose gave him a comical look.

"I've got to get out of here," Trixie thought. "Hey, we're on our way to Canada, north of Vancouver. I'll hop off this fruitcake express in Vancouver, start a new life, somehow."

It seemed good at first, such kind and gentle people, playful in the sunny park. Welcoming. Trixie figured she could blend in, cast her worries aside, relax and drift downstream for a spell. She was even willing, nay happy, to donate all of her money to become a part of the family, before it splintered into this all-female brigade. Then the bloom withered quickly. There was the petty crime, shoplifting and such, to keep the family going. And the gals were supposed to submit to Baba Don's whims on a host of chores, not the least of which was sharing his bed in the little office, running through Kama Sutra positions as it suited their earthly lord and master. Ugh.

Once quizzed why he was allowed McDonald's fare, not to mention Chivas Regal, while the family had to subsist on carrots, Baba Don explained, "It is my boundless joy to shoulder the burden of expansive temptation, to wallow in the filth, as a sort of explication of the temporary extrapolation of demonic wizardry on this mortal plane so that you, my dear devotees, needn't. Well, you needn't, as it were, if you will, so to speak. Witness the praying mantis and the moth, forsooth. Or listen to the heartbeat of a lone hummingbird. Now, let us meditate! An hour of meditation, people! Ommm..."

This evening, Baba Don took two too-young runaways by the hand and led them to his office for a nightlong "special meditation session" as the bus charged north, freckled Annie at the wheel.

"This is wrong, all wrong. I've got to have to figure a way out of this," fumed Trixie.

That night there were whispers. They were heading north, it was said, for a bloody crime Baba Don had plotted, the extermination of a rival Krishna cult, Krishnas who were pampered in a millionaire's mansion, his frozen food franchise bankrolling their shebang. The rumor was that Baba Don was furious that the rival sect was coddled, riches rained upon them, while he was forced to scrounge. He wanted throats slit, the whispers said. Trixie shuddered, and she wondered, why? Why do things have to go wrong, so impossibly wrong? Here she was, wanted for two murders, however justified, yet murders nevertheless, and rocketing along to a scene of possible mass carnage. If this was even true. Who knew? All these women were screwy, one more than the next. "Not that I'm a mark of sanity."

Trixie rolled into a dark corner and clutched her knees to her chest and thought back to when she was young, to when she'd bought her first record, a 45 by The Chantels, at the local A&P. The song was desperate yet unearthly, the sound of a mystical wind tunnel. She played that little record over and over. Once it finished, she’d carefully place the needle back at the beginning, a click and a whoosh, and the colored girls sang their tale of uncertainty, not a song with a resonant yes or a decisive no, but a maybe, a maybe if I hope and pray, maybe, maybe...

Dash and Mill had done all that needed to be done for the wedding date. It would be a small ceremony, not much in the way of family or friends to invite, on the first Saturday in June at the nearby Congregational church. For their last restaurant dinner as an engaged couple, Dash lifted his wine glass and said, "To us! To our future, to our life together!"

"I cannot believe this is happening! It... it seems like a dream..." murmured Millicent, eyes closed.

Trixie felt as if she were thrust awake from a dream, into a nightmare. The last thing she could recall was being on the bus, curled into a fetal position, singing that old song to herself, lost in childhood, now here she was sprinting a long gravel driveway with those twins. Dawn was just cracking. The early morning air was moist and renewing, a startling contrast to what they were racing from, the bedlam going on inside the rustic mansion deep in the Canadian forest. Indoors was a human abattoir, walls splattered with blood and gore, reverberating with screams as Krishna slaughtered Krishna in an internecine battle to the death, a power grab, only one sect would be victorious, and that victory was surely with Baba Don's clan, armed with machetes and the element of surprise, as they invaded and decimated the enemy faction. Who knew such fury could be released from carrot-chomping females? How could bunnies, docile and subservient to Baba Don and Krishna, cackle with delight as they sliced and diced human flesh?

Baba Don cheered his cohort on. "Kill! Spill! Spill the pig's blood! Send them to their next incarnation! Carnations of blood and slime and the sublime! With a slice! A slice of lime! Haha!" He held his chin high, danced a jig, felt like Buck Rogers in gold lamé, like Supreme Krishna.

Trixie followed the twins, Tracey and Lacey, age 14, as they ran towards the three cars in the driveway: a 1971 Rolls Royce Silver Shadow, a freshly-minted Maserati sedan, and a powder-blue 1958 Thunderbird convertible, top down. Fords the twins knew, so the ladies hopped in, twins in the front, Trixie in the rear, and hightailed it the hell on out, fishtailing gravel left and right, onto the country road, down, down, down the mountain, pines looming over them. The car seats were moist with a thin skin of dew.

From the glove compartment Lacey found a pack of Parliaments, lit three and handed out two. "We been drivin' Fords since we was old enough to walk, been tinkerin' 'em since we was knee high to a Kentucky grasshopper. Daddy's a Ford man, boy! He shot a dude once for bein' a Chevy man! Di'n't kill 'im, just blew the varmint's knee out. That learned 'im! Hale, feels good to breathe smoke ag'in, boy!" She flicked on the radio and Bad Company blasted. "Y'know, we may be crazy, but we don't go 'round murderin' people. Baba Don's bad news."

Her wrist draped over the steering wheel, Tracey said, "I can’t wait to hit a McDonald's! I'm starved for burgers and fries! Needs me some nourishment!" Lacey exhaled cigarette smoke and made a rock ‘n’ roll fish-mouth pout, her shaved head nodding in concurrence. She ripped off her robe and let the wind sweep it away. She sat there naked as a jaybird, happy as a clam. She piped up, "Free ag'in, boy! Where do we get some drugs?" Tracey and Trixie laughed. Searching the glove compartment, Lacey found a small purse filled with big bucks, 50s and hundreds. "We is good!" Tracey replied, "We gawn to party, boy!"

"These twins are firecrackers," Trixie thought as they flew down the mountain, tires squealing through hairpin turns. Lacey stood up, hands gripping the windshield's chrome rim and let loose a blood-curdling yell, something that came from deep within, something that went back generations, went back centuries, millennia. On her left buttock was a tattoo, in a Germanic font, that read: Born to Raise Hell!

Sitting back down, she howled, "Cain't git enough!" Her fists in the air, armpits to the wind, she beamed. Along the way, Trixie learned about the sisters. "Don't you worry gal! Our mom is full-blood Cherokee, an' our dad was a Green Beret. We knows how to survive, girl. And have fun!"

Spotting a lone cabin at the base of the mountain, clothes on the line overnight, they quietly helped themselves to new duds, and snuck away, into town, found the McDonald's, ordered three big bags full of greasy grub and extra-large cups of black coffee.

The gals sated, Tracey motivated the T-bird to the highway. The three were silent, smiling, content. Lacey said, "Spring is in the air, love is all around, I feel good, I feel good."

They raced along the highway, headed south, for Cali, ready for come what may.