High numbers and unfinished highways at the edges of the city. 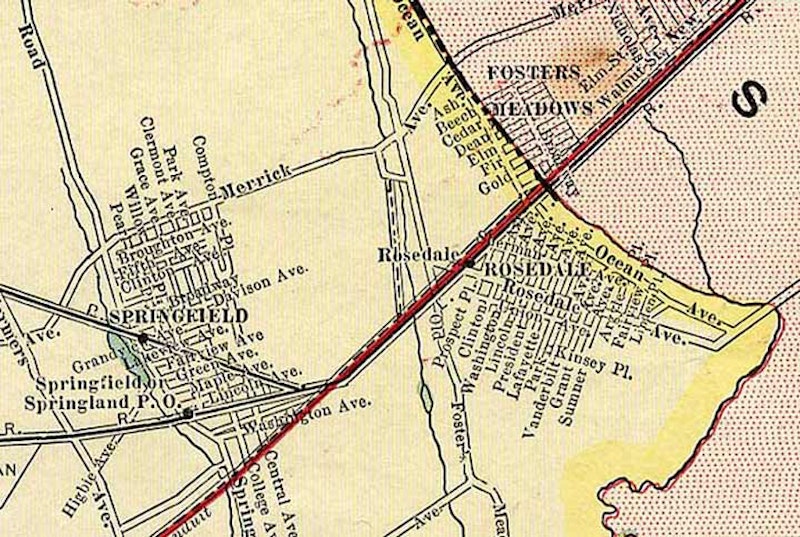 Quiet, suburban Rosedale is clustered along the Queens-Nassau County border, between Laurelton in the west and Valley Stream and Woodmere in the east. When visiting the area a couple of years ago, I was struck not by its architecture, which is mostly 1950s and 60s suburban sprawl; I was more impressed with its resemblance to neighboring Nassau. It seems to be a part of Queens only by political considerations.

Until 1898, when New York City expanded to five boroughs, Queens and Nassau were one large county. Moving along the Queens-Nassau border, you can see places where they might as well have never separated. It’s a place where some of Long Island’s longest roads begin and end.

A 1910 map by Hammond shows Rosedale as it was around 1910, when southern Queens was mostly farmland dotted with small towns. The Long Island Rail Road was well-established by then; the Springfield station was eliminated in 1939 when grade crossings in this part of town were eliminated. The area is currently served by the Laurelton station, with the town of Springfield absorbed by the new Laurelton Land Company real-estate development in the early-20th century. (Old Springfield was settled in the 1600s and will be featured on an upcoming Forgotten NY page.) In the map, the pink is the town of Hempstead, Nassau County; the yellow is Queens.

The red line represents the aqueduct, or conduit, carrying water between the now-demolished Brooklyn Water Works near Freeport back to the city. The ruins of the works can still be seen as you ride the LIRR directly past. The aqueduct has lent its name to Aqueduct Race Track (in 2005 pondering kicking out the horses and bringing in slot machines) as well as North and South Conduit Aves.

As seen from the map, many of the area’s main roads are already there in 1910; some date back to the colonial era. Freeman’s Path, later Farmers Ave., was renamed for the area’s agriculture and is still so-called, even though all of Queens’ farms are gone, except for the Queens Farm Museum in Little Neck. It was renamed Farmers Blvd. after a county edict in the early-20th century mandated that many of Queens’ main roads be renamed “boulevard”: hence, Vernon Blvd., Northern Blvd., Springfield Blvd., etc. 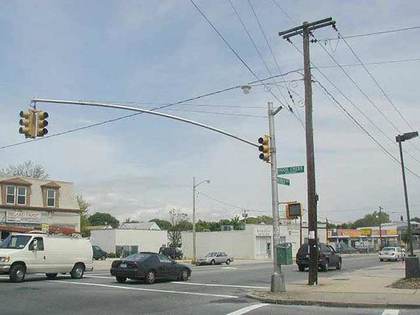 Merrick Ave., now Blvd., is still there too. It begins as a trickle at Hillside Ave. between 166th and 167th Sts., and is only two lanes for a couple of blocks (yet hosts a major Jamaica bus depot and the main branch of Queens Public Library) before gaining multiple lanes at the most forlorn “Grand Army Plaza” you’ll ever see at Liberty Ave. and Tuskegee Airmen Ave. It picks up steam, hurtling through Springfield Gardens and Laurelton, before entering Nassau and changing its moniker to Merrick Rd., roars through Valley Stream, Lynbrook, crosses Sunrise Highway (see below) in a complicated interchange in Rockville Centre, zigs and zags in Oceanside, Baldwin, Freeport, its namesake Merrick, Belmore, Wantagh, Seaford, Massapequa and West Amityville. Near the Suffolk line State Highway 27A takes over, and in general the road is known as the Montauk Highway until it ends at Montauk Point. Just east of Southampton, it becomes State Highway 27, inheriting the route from Sunrise Highway. The town and the road were both named for the Merrick Indians. 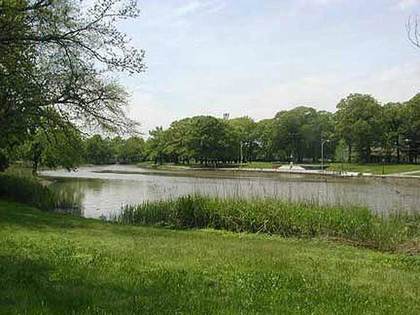 While Brookville Park encompasses 90 acres, most of it, the portion south of 149th Ave., is undeveloped and wild. The cultivated section is generally between South Conduit Ave., 147th Ave., 232nd St. and Brookville Blvd. A natural stream divides that section in two, punctuated by Conselyea’s Pond just north of 147th.

A long-forgotten spur of the LIRR, known as the Cedarhurst Cutoff, once ran southeast through Rosedale. Today it’s remembered only by the street pattern (a glance at the map shows Edgewood and Huxley Sts. diagonally cutting through the grid for no discernible purpose; the RR once ran between the two streets). And, there’s a lengthy clearing in Brookville Park (left) corresponding to the RR’s old route. the line connecting the main line to Cedarhurst was only in active use between 1872, when it was built, and about 1880. Yet the LIRR had high hopes for it and it was rebuilt in both 1918 and 1928, the latter an electrification, but trains never ran on the route again and by World War II, the rails had been torn up. 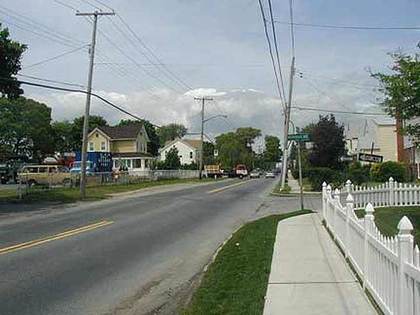 Running from the junction of Brookville Blvd. and Elmont Rd. (which never quite reaches Queens) and 149th Ave. is Hook Creek Blvd., which is hardly a boulevard but a moderately busy two-lane route.

From Brookville Blvd. south to about 132nd Ave., though, only half of Hook Creek Blvd. is in Queens. The border runs down the middle of the street, and the eastern half is in Valley Stream and is called Ocean Ave. South of 132nd, the Nassau County line moves slightly east of the road, and all of Hook Creek Blvd. reverts to Queens. Both sides of the road were called Ocean Ave. in the early-20th century. 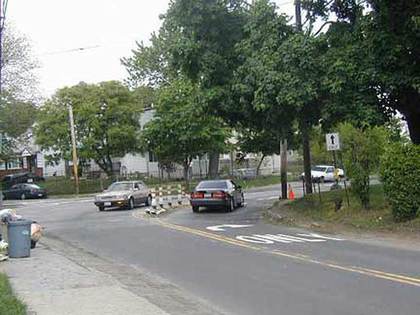 Hungry Harbor Rd. extends from Hook Creek Blvd., crossing the boulevard’s titular creek before entering the town of Woodmere and changing its name to Rosedale Rd. The origins of this name are something of a mystery. However, a publication honoring the 50th anniversary of Valley Stream, published decades ago, has this to say: “On the extreme southwest, approaching Jamaica Bay, was Hungry Harbor, so called because it was largely a settlement of squatters, and the squatters went hungry a goodly part of the time. True, it was a harbor because it was the only area of farmland that possessed rich fertile land in addition to having access to the sea.” 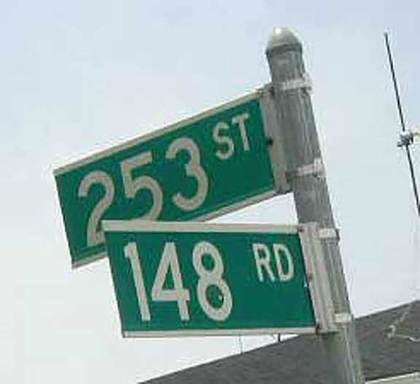 Seinfeld’s Cosmo Kramer, finding himself at 1st Ave. and 1st St. (a corner in the East Village), called it “the nexus of the universe.” Rosedale, then, must be the edge of the universe… it has NYC’s highest-numbered streets, when you add the cross streets together. NYC’s highest-numbered individual street, 271st, is in Bellerose. But the biggest sums are in Rosedale, such as the 401 shown here. The biggest sum of all in Rosedale is 411, at 149th Ave. and 262nd St. 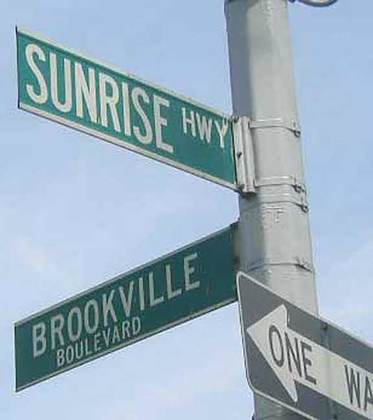 Sunrise Highway was begun in 1926 and was never really finished. It’s an at-grade highway in some sections, and an elevated expressway in others. The expressway sections in Nassau and Suffolk Counties were begun in 1958 and the latest, in Oakdale in Suffolk, was finished in 1998. The highway proper is State Highway 27 (as Linden Blvd. is in Brooklyn and Queens) and carries the name Sunrise Highway as far as County Road 39 in Shinnecock Hills. But Sunrise Highway isn’t thought of as a New York City thoroughfare. Or is it?

The highway extends west into Queens, or rather proceeds from Queens east, for the better part of a mile. When the Belt System turns north along the Queens-Nassau Line, Shore Parkway becomes Laurelton Parkway and Sunrise Highway picks up some of the Belt Parkway’s eastbound traffic. North and South Conduit Aves. transfer their allegiances here: they’ve accompanied Shore Parkway all the way from the Brooklyn line, and escort Sunrise Highway till they end at the city line just east of Hook Creek Blvd.

I have a couple of maps from the 1930s that show Conduit Blvd., the four-lane section of the Belt that spurs west from Cross Bay Blvd. to Atlantic Ave., as Sunrise Highway but have yet to see anything definitive regarding that.