Wearing sunglasses at night as an affront to humanity. 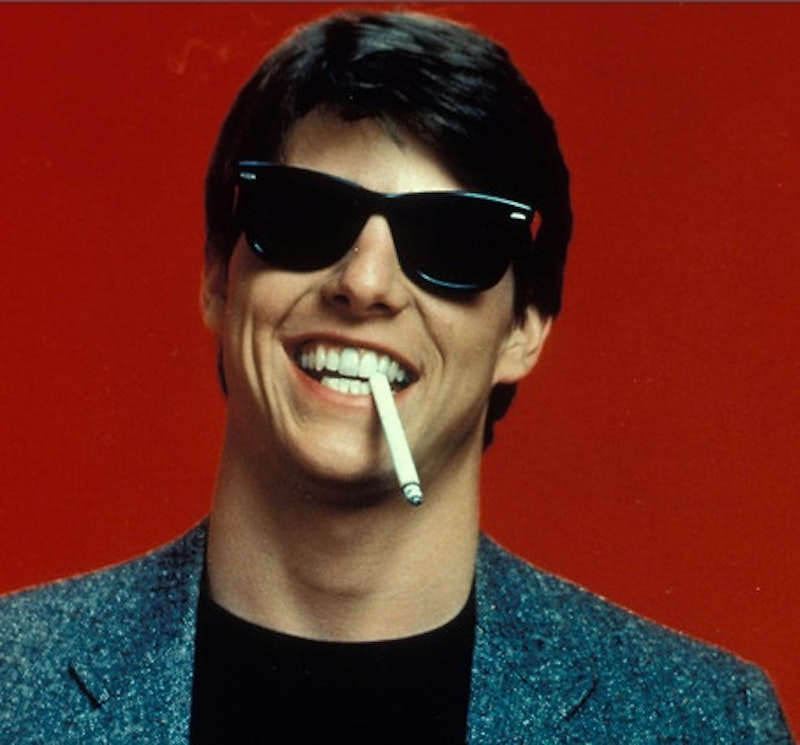 When did wearing sunglasses inside or after dark become such a universal faux pas? The Reagan administration? No one notices or cares if you wear white after Labor Day anymore, but wearing sunglasses at the wrong time or place is like saying “Bomb” in an airport security line. All eyes on you, a conversation piece for first dates struggling for things to talk about. “Is he…?” And then they both agree that wearing sunglasses inside and at night is indefensible. These two spend the rest of their evening discussing the semiotics of the guy in Bono wraparounds at the end of the bar who left two hours ago. It’s a fashion accessory, it’s a statement, an obnoxious one at that… he kills his vodka tonic, she lights a cigarette… I don’t see what he has to hide, or to prove… save it for Daytona Beach—hey, what are you…

—And what time is it now, dear?

—Wonderful. We shall be on our way.

—I need a photograph of you for our wall. You are banned for life from this bar.

She pulls out a pair of bug eyes and slips them over half her face and turns around holding the hand of her plum. They hit the streets looking for a cab, scarce on a rainy night in a February polar vortex. She keeps her shades on, slowing down to watch her steps and running into fire hydrants and parking meters, her plum forcing an explanation.

—I thought you were different.

—I thought you were against this. This isn’t you, the whole shades thing, all that.

—Darling. Do remember that I paid for your shipping.

—I just… during dinner and all, the wraparounds guy, Bono, we were making fun of him.

—Yes, good. Good, darling. We were. But not simply because he wore his sunglasses at night. It was because they were ugly glasses and his motives were questionable.

—He was a douchebag.

—Sure. His line of thinking, his whole life leading up to that point is questionable. He had leather trousers and fingerless gloves.

—So you’re big on animal rights and all that?

She wishes her husband could see this. Hailing a cab, they get in, headed over the bridge. She turns slightly toward him, with her eyes focused squarely on the little credit card TV monitor with Dave Holmes talking about The Book of Mormon and the band Garbage.

—Wearing sunglasses at night is a threat to the status quo. Hands up, eyes out. It’s an easy pass, aloof only because people assume you see them as beneath you and your station. It’s really not that at all. Look me in the eye, watch me wither. Sunglasses or Xanax? It’s like the electric car. The pharmaceutical industrial complex will never allow sunglasses as socially acceptable social anxiety relief. It’s too much money.

He lights her smoke. The cab driver turns around.

—Ma’am, you cannot smoke in my cab.

—You didn’t offer me one.