Fashion Advice For the Sexy Shooter

Conceal carry with confidence and the results will fall in line. 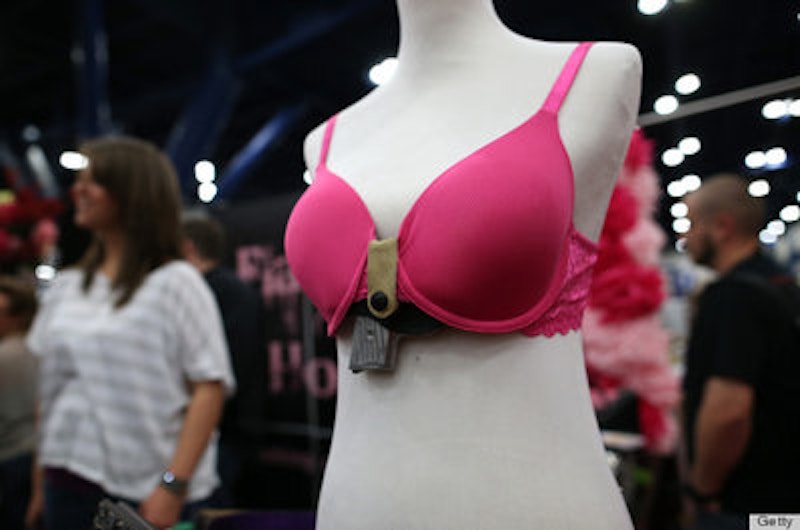 I know a thing or two about fashion, and am occasionally asked for advice on the topic. My interest isn’t confined to the demi-monde of Haute Couture, however. I like drilling down into specific niches of the fashion industry. The one that’s captivating my imagination now involves women who have concealed carry weapons permits. How many of these secretly armed females are out there? I can only guess, but it's safe to say that many of them do not want to sacrifice style while packing heat. It's certainly no simple task to look fashionably smart while concealing a fairly large chunk of metal on one's person, but with the right approach you can make it work.

Having spent considerable time pondering the convergence of guns and garments, it's time to share my insights with women shooters who want to look their best when strapped. Predators are everywhere. The harsh reality is that in the course of going out to buy a bottle of milk or trimming your roses you might have to shoot someone. One of the most effective ways of preparing to shoot an aggressor successfully is to get a concealed carry permit so the "bad guys"—as they’re commonly called—don’t know you’re armed. If you decide to go the open carry route, you might just as well wear a sign saying, "Take this gun from me", because the bad guys know how to do this.

Concealing a gun on a woman's body presents some obvious challenges. Women who feel the need to be constantly armed also want to look good, just like anyone else, and having a gun bulge is not going to cut it. This brings us to the topic of "printing." If your gun bulge is showing, this is what we call "printing," and it's is a very big no-no from both a fashion and a tactical point of view.

Fortunately for the pistol-packing modern woman, there are a number of fixes for this problem. One of the basic rules of printing is you change your garments to reflect your gun. If you are intent on carrying that full size Glock, then you probably won't be wearing that yoga pants/tank top combo that gets you all those cat-calls. And, just as a quick aside, the armed woman welcomes cat-calls as an affirmation of her feminine appeal. The lady shooter doesn't waste much time agonizing over the insidious aspects of the male gaze.

Choice of materials is a key component of fashion, and you’ll find that the use of bold patterns has a camouflage effect on weapon bulges. Think about trying some frill below the bra too if you ‘re using a bra holster and want to go heavy with something a little bulkier than a snubnose .38. Keep in mind that if you’ve taken proper measures to prevent your gun from printing but you're still feeling some doubts, it may just be in your head, just like it is when you buy that new dress and fuss with it because you can't get it to look just right. Conceal carry with confidence and the results will fall in line.

As for holsters, know that for the stylish woman wearing iron, there are an abundance of choices. New holsters are constantly coming on the market, and your challenge will be to choose the one that best suits you. Ask where you want to carry. Is it over the shoulder, at the waist, on your thigh or bra, or in your pocket or purse? Choice of material is again essential. You could buy that nice feminine, lacy holster, but is that going to protect the trigger guard? It's great to look your best while packing, but if your trigger isn't protected it won't matter much if you end up shooting yourself or an unfortunate civilian. And if you decide you're ready to carry with a round in the chamber—what we call a "hot" gun—choosing a sturdier material for the holster becomes more crucial. Leather works well. Not having to rack the slide after drawing your weapon can save you precious time, but it calls for extra caution.

A woman has a number of options as to where she can carry a weapon. Around the waist is the most common choice, and usually the best one, and it has the added advantage of not presenting serious fashion challenges. If you decide to be a "bra carrier" there are some issues to address. The cardinal rule here is to match your bra with your gun. That Dita von Teese Madam X Demi flimsy one may turn men's heads in the street, but will it also support your "heater"?

A comparison of popular choices tells me the "Flashbang" is the best bra holster. One popular Flashbang holster offers both "low" and "high" carry options. Your weapon can either hang from the middle piece of your bra, or it can be tucked into one of the cups (left cup for righties, right one for lefties). The high carry option can have the added advantage of giving you a little lift, though beware of any lopsidedness. Your mirror is your friend! If you choose to pack on the side of your bra, go with Flashbang's "the Marilyn" holster, which employs both a leather strap and a metal clip. This is a good choice if you’re going out for the evening and wearing a low-cut dress, as you can access the gun through your neckline. You'll want to limit your firepower if you choose this option, since a larger weapon can’t be easily concealed on the side of the bra. A Ruger LCP .380 is just about right.

The seasons will be a factor in how you choose to present yourself while surreptitiously armed. That flannel shirt that hides your gun in cooler weather is obviously impractical in the summertime. As a general rule, think looser and longer in summer, as the thin materials you'll be wearing are not effective for preventing printing. There are exceptions. With a large enough bust, you could wear a tight-fitting tank top and still easily disguise something like the fairly hefty Beretta 92FS "under the shelf" using either Flashbang's high or low carry option. The less endowed will, realistically speaking, be forced to give up some firepower with a bra holster, perhaps having to settle for as little as a Bauer .25 caliber automatic, though I generally advise not going with less than a .380. The Bauer is a bit dinky and far from ideal, but the biggest mistake would be to not carry at all.

A summer option is carrying your weapon inside your pants, though it’s not entirely clear why anyone would put a loaded gun down there. If you happen to be carefree about such matters, Thunderwear, which sells holsters you wear over your underpants, may be the ticket. You won’t want to tuck your shirt in if you choose to take this route, and the usual rule applies—the bigger the weapon the baggier the clothing. I'd say go with sweats or pleated pants to carry a "big stick" down your pants. If you wish to conceal your gun but not your figure, compression shorts with a sewn-in holster in the back could work, and they come in several brands. You may want to just stick your gun in your pocket, but make sure there's nothing else in that pocket so you don't draw on someone and find your keys or a bobby pin stuck in the trigger guard. If you carry in your purse and have children, make sure your child doesn’t grab your gun from it and shoot you.

What it comes down to is that "gun girls are fun girls," so they obviously don't want to dress in baggy t-shirts and mom jeans just because they feel compelled to be armed everywhere they go. Strive to find a balance between sexy and functional; between tasteful and tactical. When you’ve tinkered with this delicate question, think about adding that finishing touch to complete your sexy shooter look. Yes, I'm talking about accessories. There’s a wide variety of 24-karat gold gun necklaces on the market. You could choose the AR-15 necklace to make a bold statement, but you're a concealed carrier. Why not go with a tasteful handgun dangling daintily on your clavicle? The bad guys won't even notice it until you've drawn on them.