Ruthless as the Rain

Fiction: A macchiato, vexatious human interaction, and a hack. 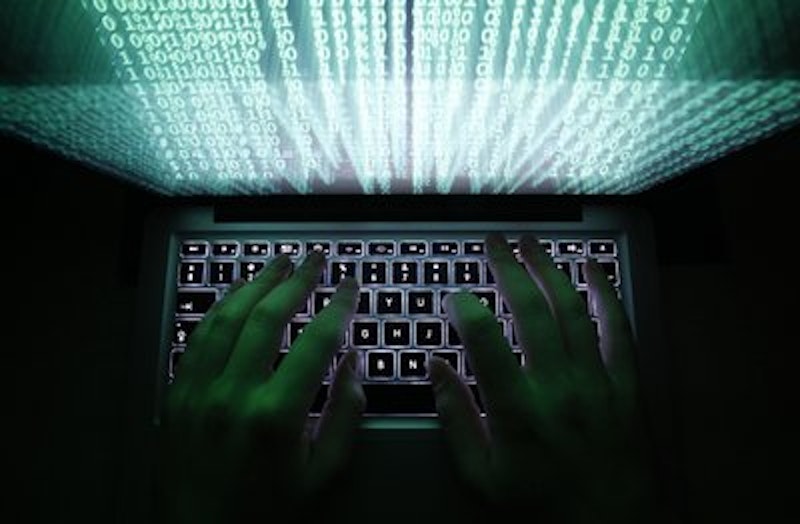 I was standing on line at Starbucks when I first heard it. I hate Starbucks in principle, but it was raining and cold, and I had a mad craving for a great big Caramel Macchiato with whipped cream and a shot of hazelnut, something hot and sweet. It was steamy and warm in the Starbucks on Castro St. The inside glowed like Golden Hour film stock, the kind Gordon Willis used in The Godfather. Outside was all Hitchcock black & white, dark gloom and wind and driving cold rain, a typical November day in Northern California. I'd come into town to deposit a check at the bank and return a couple of videos and books to the library. I was soaked. Everybody was. There were three or four people in line, and the usual scattering of people seated around engaged with their phones, iPads, and laptops. There was no conversation.

The wind whipped the trees outside, scattering soaked dead leaves all over the sidewalk. In another half-hour or so, the lunch crowd would arrive, the twentysomething worker bees of Google and the other tech companies clustered around Mountain View would swarm all over Castro St., creating the near-gridlock situation that signifies lunch in this town. A cute little white girl stood in front of me in line. Somewhere in the college years, as white as a glass of milk, about 5'6" tall, thin, glasses, dark hair in a pixie-looking cut. Soaked in her cobalt blue North Face rain jacket and Levi’s jeans. Beautiful delicate hands, long fingers, right hand hitched by the thumb to the strap on her pack. For some reason, I thought she was from Oregon. She was wearing Gray Nikes. Gray Nikes make me think of Oregon. I've never been there. She was just about to order when it happened.

I heard it. The male cashier heard it. She heard it. The cashier broke eye contact with her and looked at me. She turned to me and started to speak. She sputtered, "What did you…"

It was a male voice. It sounded like Jack Nicholson. It was coming from the right breast pocket of her jacket. It was calm. It seemed a little louder the second time, but still calm. The girl wasn't calm at all. Her facial expression went from accusatory outrage to astonishment to anguish and outright blind fury as she seized her iPhone from the pocket.

No longer muffled by her pocket, still very calm but loud enough that people looked up from their phones and laptops and iPads. It sounded more like Sean Connery this time. For a moment, the room was silent. Choking back a sob, the girl answered the phone. After a very brief pause, she shrieked, threw the iPhone to the floor, shattering it on impact, and fled screaming into the torrential rain, all eyes following her sprint to the door. The cashier looked at me, I looked at him. "Wow," he said.

"Headcase, probably," he said. "Never seen her before, but we get a lot of 'em here. What can I get you?”

Over my left shoulder, an Asian guy at a table with an iPad and an expression of abject horror on his face. I look back at the cashier. His face is frozen on the iPad guy. He looks the way I imagine people look when they see Bigfoot or a flying saucer. Was it Peter Coyote's voice?

"I want your giant Caramel Macchiato with whipped cream and a shot of hazelnut," I said.

Everybody was staring at the guy with the iPad. The entire room was transfixed. It felt like a bad acid trip, the warm incandescent glow of the room and its market research-determined earth tones contrasted with the harsh quivering darkness of the storm outside, the tense apprehensive silence of the room punctuating and emphasizing the offensive morphing baritone voice. The Asian guy vomited all over his iPad, watery cafe au lait colored liquid with bits of biscotti the size of croutons. It looked like Campbell's French Onion soup with little croutons in it, mixed with coffee. Outside the wind suddenly died down, and the rain stopped. Complete silence, everyone fixated on vomit boy with the iPad. And then, like some sick madrigal, from all directions in the room, slightly staggered:

Every wireless device in the room: calm, loud, and sounding exactly like Barbra Streisand.

It was like waves crashing against a jetty, like Pink Floyd’s 360-degree sound system in miniature, going in and out. A statuesque older white woman dressed entirely in L.L. Bean clothes and accessories totally lost it, foaming at the mouth and uttering a horrid guttural sound as she pushed her laptop, coffee and cell phone to the floor. She slid off her chair twitching and began convulsing on the floor, squirming around in the spilled coffee and the detritus of her gadgets. I figured she was from Palo Alto. The cashier was paying no attention to me at all.

"I'd like a really big Caramel Macchiato," I said. "Sometime today. I'm stoned and I have to be somewhere." It's legal to be stoned in California. It's one of the very few advantages of the place. It's mainly that and the weather, and the fact that you can run around naked if you want to.

I never did get my Caramel Macchiato. The cashier announced that the place was closed and called 911 for an EMT. I left, leaning into the wind and the rain as I made my way to my car. Traffic on Castro St. was a mess, little fender-benders happening all over the place. I got to my car and got in. The rain sounded very romantic on the car, like rain on a tin roof. I lit a cigarette, turned the key in the ignition, turned on the defroster and turned on the radio, 740 AM, CBS news. The announcer sounded breathless."…and GPS devices. Google announced that their engineers are working on restoring all Google services, including the search engine, and Apple, Samsung, ATT, and Verizon have made similar announcements. Industry response was swift, but there is still no information on what caused this phenomenon, and there has been no information forthcoming from either the state or federal government." I switched over to 103.7 FM, the oldies station. It was playing "Louie Louie" by the Kingsmen. There were sirens in the distance, in every direction.

I remembered that I had a Trader Joe's Eggplant Parmesan frozen dinner in the freezer. That's the thing about being stoned all the time: it's all about weird cravings. I figured to swing by Safeway and pick up a case of Pabst, head home, nuke the eggplant, smoke some more pot, get drunk, and write. No need at all for me to be out in this shit. By the time I got to Safeway, I'd passed a dozen minor accidents and one really horrific one right where the off-ramp from Central converges with Shoreline: a bisected minivan, a shredded BMW, and a huge white municipal pickup on its side. Blood and meat all over the place. I kept it peripheral. I didn't look right at it. 103.7 kept playing "Louie Louie." I switched over to KFOG: same thing. 107.7 "The Bone," same thing. It was "Louie Louie" at every point on the FM dial. Cops were directing traffic at Shoreline and Montecito, where the Safeway is. The rain was unrelenting, coming down in great sheets, drops the size of NATO rounds thudding against the car. Idiots were hydroplaning all around me. I parked right near the entrance and dashed in. There were cops gathered at the Starbucks kiosk inside. It looked like the aftermath of a Stephen King novel: spilled food and condiments everywhere, those little yellow plastic sawhorse-type things warning about slippery wet surfaces, employees with mops in every aisle except, thankfully, the beer aisle, which looked like the Big One had hit. Obviously they were saving it for last.

I wrestled two cases of PBR out of the cooler and made for the one cashier that was open. The line was long. The manager was standing next to the cashier. The cash register system was down, so they couldn't accept debit or credit cards. The scanners were down, so the manager had to look up the occasional item price in a sheaf of papers on a clipboard. Luckily, I had cash. The people in line were muttering about hackers, Arabs, Trojans, worms, spambots; thankfully, they hadn't gotten to the Illuminati yet. There was ample time. They would. The incredibly fat white guy in front of me insisted loudly that Obama did it.

"David Mamet did this," I said.

"Who's David Mamet?" asked the Fat Man. I sighed as theatrically as I could, and remained silent. I handed the cashier my money and hustled my way out to the car.

My shitty little apartment had never felt cozier. I cracked a beer and turned on the radio. It was set to 88.5 FM, the local NPR affiliate. I spit beer through my nose when I heard Laurie Anderson's voice very calmly saying, "Shit, meet Fan. Fan, meet Shit." I lit a half-smoked joint. "Shit, meet Fan. Fan, meet Shit." Over and over it went, again and again and again. It was soothing, because it was Laurie Anderson's voice, but I wanted some news. I flipped the dial to 740 AM and sat down. A male announcer, sounding very frightened. The sound was bad, like a broadcast from 1939, all crackly with static and tinny."--gency Broadcast system was shut down immediately when it began to exhibit symptoms of compromise. The phenomenon knows no borders: wherever there is an Internet connection or a cellular signal, it is there. There have been no demands. Security experts agree that it’s not a virus, it’s unlike anything ever seen before. The Department Of Homeland Security has taken the country to the highest level of alert. Once again, remain in your homes. Turn off your cell phones and landlines. Do not go outside unless you have a medical emergency. Law enforcement will be enforcing this temporary curfew. FEMA has announced tha--" It went to static. Oscillating waves of static. I couldn't stop grinning.

I knew it would be pointless, but I couldn't resist. I went to the kitchen and booted up my laptop. I had to see. I had to try.