Malls and Schnitzel in Glendale

Like Middle Village and Maspeth, Glendale is a small region in western Queens that the subway system has seemingly forgot. 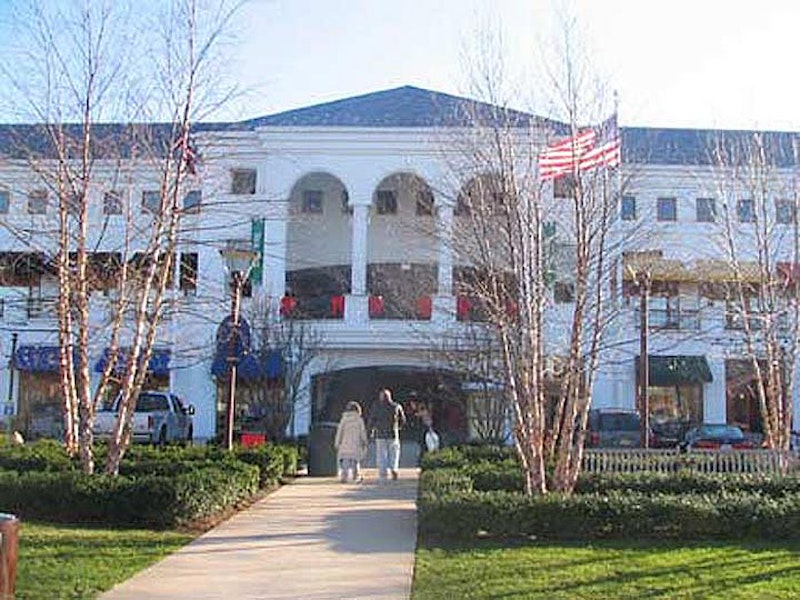 In the early-1860s, developer George S. Schott acquired land in Fresh Ponds as repayment of a debt owed him. As the Civil War drew to a close, he founded what is today known as Glendale, which he named after his hometown of Glendale, Ohio. At this time, the area’s main occupation was farming.

Like its neighbor to the north, Middle Village, and Maspeth, further to the north, Glendale is a small region in western Queens that the subway system has seemingly forgot. Ironically, two of its borders are marked by a railroad, as a Long Island Rail Road freight line bisects it from east to west: known as the Montauk Branch, it connects the waterfront at Long Island City and Jamaica.

Glendale is officially bordered by Metropolitan Ave. on the north; Otto Rd. and Central Ave., which run along the railroad, on the west; the Cemetery Belt running south of, and along, Myrtle Ave. on the south; and Woodhaven Blvd. on the east.

Curious Williamsburghers can access Glendale along the B54 bus running along Metropolitan Ave., while Ridgewoodites can get there by the B55 on Myrtle Ave. There’s also the M train to Fresh Pond Rd. and then a hike south along that street and then east along Myrtle Ave. to get to the heart of Glendale. So far, Queens locales like Maspeth, Middle Village and Glendale have avoided eastern encroachment of gentrification and the high rents and exclusivity it brings, as happened in parts of Bushwick and then Ridgewood, probably because of the lack of subways.

At 80th St. and Cooper Ave. you’ll find one of Queens’ largest outdoor malls. The Shops at Atlas Park opened in April 2006, encompassing the site of the former 25-acre Atlas Terminals industrial park, which which at one time housed companies such as General Electric, Kraft, Westinghouse, and New York Telephone. Its only remnant is a tall water tower that has become an unofficial neighborhood landmark. The mall is a pleasant place for an outdoor stroll and so serene and well kept, you might forget you’re in New York City.

Atlas Park had struggled to develop a large following in Glendale, and it took a hit from the bankruptcy of a major tenant, Borders Books. Atlas Park had been on the comeback trail, but will now need to rebuild a following yet again as the slow recovery from the Covid trough is ongoing. The mall is served by two bus routes originating in Jackson Heights, the Q29 and Q47. 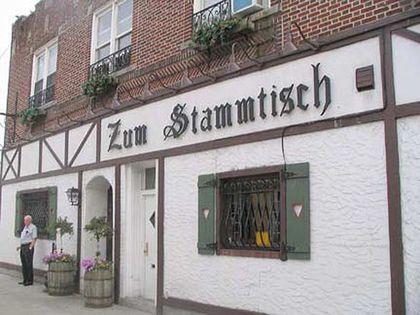 Glendale was formerly one of New York City’s most populous German-American bastions, and home to a number of restaurants specializing in German cuisine, such as Gebhardt’s, Durow’s and Von Westernhagen’s. Zum Stammtisch is the lone survivor, although it was the new kid on the block when it was founded in 1972 by Bavarian immigrant John Lehner at 69-46 Myrtle Ave., just west of Cooper Ave.

In 2011, Werner and Hans Lehner, the current owners of Zum Stammtisch, citing the disappearance of German restaurants and specialty stores in the area (including the well-known Karl Ehmer’s) opened the Zum Stammtisch Pork Storenext door to the restaurant. German imports make up 90 percent of its offerings, including butcher and bakery products, as well as every variety of wurst on the market. 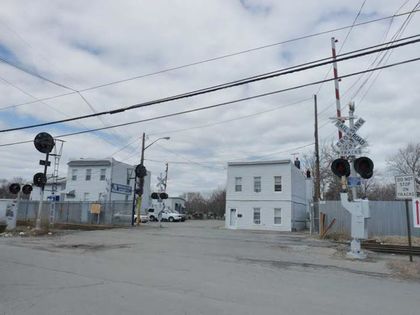 Glendale was formerly served by a passenger railroad stop at Edsall Ave. and 73rd St., but the service was discontinued in 1998 because the LIRR was purchasing new cars that required high-level platforms, and the railroad found it unnecessary to construct new platforms at a station where three trains stopped daily, serving less than 10 passengers.

Periodically, there’s talk from local politicians about connecting this spur to the subway network, but those discussions have never borne much fruit. Both of the buildings in the photo above were former roadhouses catering to railroad passengers in the late-1800s and early-1900s. This is one of the few major railroad grade crossings remaining in the five boroughs proper. 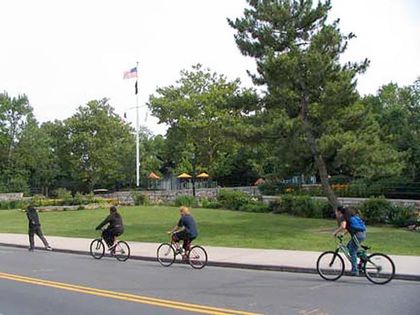 Forest Park, shown here at Myrtle Ave. and 80th St., forms a triumvirate of three vast Queens parks, along with Flushing Meadows and Cunningham Parks. The western end of the park (west of the abandoned LIRR Rockaway Branch) is the most heavily used. It includes the Forest Park Golf Course, the Seuffert bandshell, the Carousel, and Dry Harbor Playground; early Glendalers thought the view from nearby hills had a maritime cast, even though this is in the middle of Queens and the East River and Atlantic Ocean are miles away.

The park was developed by the then-City of Brooklyn in 1895, as a way to alleviate crowded tenement conditions by offering a place with fresh air. The eastern end of the park consists of dense woodland with a bike trail and hiking trails. 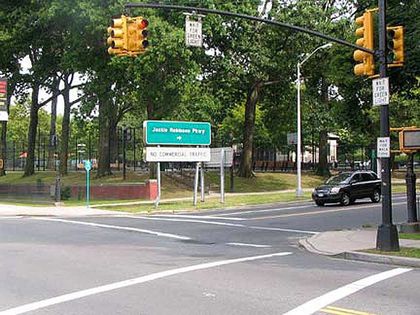 Just a few blocks from here is an entrance to the Jackie Robinson Parkway at Myrtle Ave. and 79th Lane. The Interborough Parkway, as it was originally called, was constructed in sections between 1933 and 1935. For years, the Interborough was the most primitive of all NYC express roads, as its original dimensions were retained until 1987, with narrow lanes and the barest concrete divider; driving on it was like traveling on a snake-shaped race track.

The Department of Transportation upgraded the road, making it safer, but it still retains some tight turns. In 1997 it was renamed the Jackie Robinson Parkway, for the Brooklyn Dodger who became the first African-American to play in major league baseball, on the 50th anniversary of his breaking that color barrier.