See You In Hell

We put up a damn good fight but death is still the all time ultimate champion. 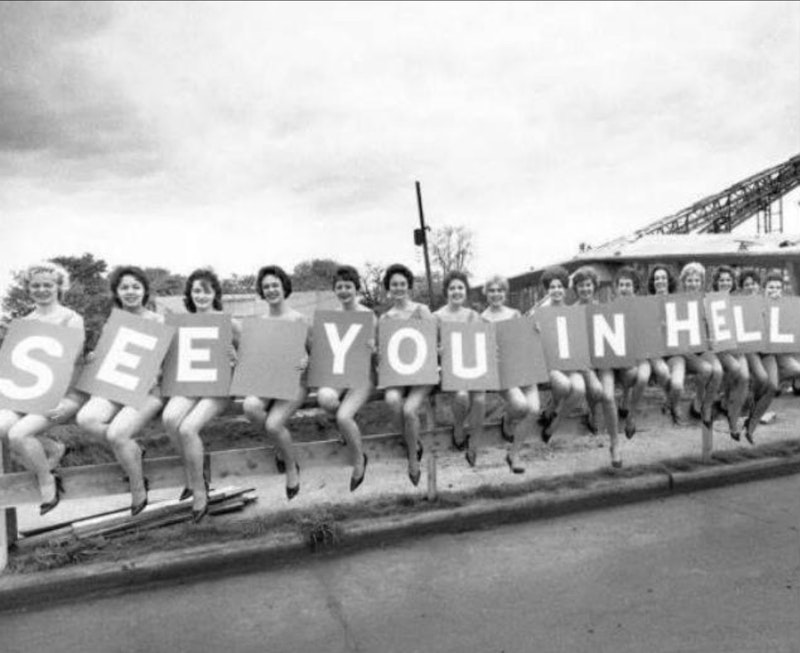 Many say this won’t end well. Some say it can only get worse. Some believe it’s already over. Screaming from rooftops or muttering under your breath. Like it’s a matter of life and death. I don’t know. If and when it happens may never be revealed. People say all kinds of crazy cockamamie shit. Will it be kicking and screaming, going out in a blaze of glory? Silent and peaceful in your slumber? It’s just another version of the end so that end can start all over again. Like a schlock movie you must watch all the time while you burn low and slow. Oblivious to constraints of time in terms of living life to its logical conclusion gets iffy. Things could end quickly by random accidents through no fault of your own or by the neglect of others. Random acts of nature or by the hand of some omnipotent god. Casualty of war, car wreck or violent crime. Poison, disease, virus, plague or old age. Maybe even a broken heart. Choke on a chicken bone or by orders from an insane dictator. So many ways to go.

It gives cause to reflect on what goes down in the course of one day, so many nights or a lifetime. Stop to ponder a reflection of the world engulfing us. Even creeps with ugly souls of darkness have hearts in their horror stories. Like the dead rock star exclaimed, “Nobody gets outta here alive.” Or was it the bank robber or the soldier who said it? Maybe the perverted priest said it between prayers. Even the drunk poet mumbled something to that effect.

Nobody knows a damn thing but everybody believes they do. They may think they have the edge. It’s a matter of personal choice. If the devil and god are fictional characters than we must be too. Figments of imagination made real. Building models and replicas of life never lived. Monuments to our undoing. To invent heaven and hell too, like it’s someplace other than here. Imaginary places and people in a false narrative of life and death dancing on this spinning dirtball. Loss and gain fluctuate between two worlds of dusty being and a nothingness.

Tedious journeys of self-awareness always lead to new and startling discoveries and self-made destruction soufflés. Vaguely aware of unfamiliar surroundings we wander aimlessly. You’ll have no say with tempting the fates. It comes back to bite you in the ass or chomp off the lower half of your body in the middle of a good time. The most cherished memories and worldly possessions will fall away. On display in that creaky casket like oblong box of moldy thoughts and dashed desires.

Stuff just sits there in the middle between rot and decay. Plastic flowers melt in hell as mountains tumble. Mark your calendar for future dates to meet up in hell. It’s a tight schedule when you’re on fire. They say heaven’s a drag although very pretty. At least hell is a kind of fiery carnival sideshow comedy of pain and suffering.

In this circle of life the dance of death never ends its fancy footwork marathon until the last dancer stops moving. A macabre puppet show to the amusement of hardy fools and the laughter of spoiled children who never know. Sorry for the loss. Sympathy is needed but not necessarily wanted for the likes of devils. As for the living, they go on pretending to be alive. Mostly people just go on in spite of themselves. It’s a different lifestyle than one imagined. Everything looks easy from the womb. Creatures of habit keep the routine simple to continue the farce.

It’s true there’s much to be grateful for. There’s plenty of time to spare while being thankful too. The praying kind will make a plea to save souls and make amends for the wicked. The religious will feign ignorance and point to the good book for proof of purpose and why we’re still here. Giving gratitude a swift kick in the assfor no good deed unpunished. Now it’s time for all good people to stop believing. Slam the brakes, stop the music and giving. The gullible will always have faith in the futility of our miserable lot. Paradise here is as valid as any old hell on earth. The also-rans who came in dead last. The hideout of survivors where survival continues. The refuge of scoundrels. Bankrupt requiem for the souls of the perpetually deceased. There’s no getting up and walking away from this game. The demons have more compassion than any god-fearing hypocrites. No need to toot your horns in a parking lot.

The do-gooders are too goddamn proud of their white skin but would sell their memaws to save their hides. Maybe you’re going straight to hell boys? They cry for love of country and piss their pants while sucking on beer bottle teats. In their soiled diapers they chant, all lives matter. If you want to drive around in a moron parade of pick-up trucks with grotesque flags sticking out the truck bed, okay. You believe it screams independence but all I see is stupidity like, “Look at me ! I’m fucking right, I’m important! It’s still your right to do that crap. All the while spewing slurs.

Likewise a nod of disgust to big unsightly fiberglass boat owners who participate in idiotic regattas displaying giant banners that say “FUCK YOUR FEELINGS.” I wonder if it’s just a way to socialize and have boat drinks? You have every right in a free country to be dumb and wrong. What a great place. You can jump into the fire and do the limbo for all I care.