Pilots, even in distress, need hand sanitizer, too. 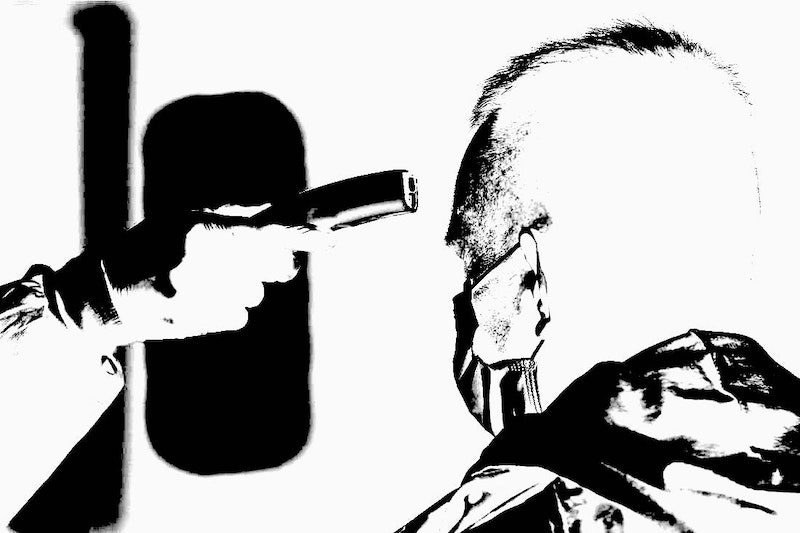 Above a plain of lights lay a grid of LED lights. Above a craft table of a city lay a crown-topped tower downtown, a chess piece on a checkerboard of boulevards and side streets, from which the houses looked like matchboxes and the cars looked like a Matchbox collection of models foreign and domestic. Above a crosshatch of cables lay an icon in the sky: a Cessna Skyhawk.

From the ground the Skyhawk was a delta-winged kite with tricycle wheels. On the ground the rate of descent was less important—much less important—than the speed of entry as people waited to be shot. The shots came from riflemen armed not with bullets but beams of light, as each target wore a mask instead of a blindfold.

Each target was a number at or below 98.6 degrees Fahrenheit. Each squinted before a flash of reflected light as gold bounced off a sextet of marksmen in silver bunker suits, as rays of halogen ricocheted from every hood and wrinkle of these guardians dressed as astronauts. All waited for the spacemen to lower their guns and raise their bullhorns.

The shouts turned to screams, like a chant of mixed numbers from floor brokers in the final seconds of trading. But for the absence of a show of hands, but for the lack of hand gestures, the show was an exercise in volume. Gone was the choreography of commerce. Gone was the touch of the forehead, the tap of the chin, the tuck of the thumb. Gone was any attempt at sleight of hand.

In the whir and rumble, the spacemen fell over each other. Their buy and sell orders became a one-word order to… RUN!

The howl of the machine hit onlookers with a wave—a rogue wave—of shock. The wave was a sonic crash, followed by a swash of debris; an uprush of leaves and leaflets and husks; an asphalt beach of sheet metal and shattered glass soaked in aviation fuel and antifreeze.

In this Kitty Hawk of fear lay the wreckage of the Skyhawk’s final flight. In the wreckage lay the pilot. Pedestrians ran toward the wreckage, despite or because of the burning propeller and scattered flames.

A man reached for the door latch, and stopped.

“Spray me,” he said to his girlfriend or wife.

“Toss me the package.”

“Toss me the goddamn package.”

That the handle was too hot and gnarled to lift didn’t matter, because the pilot had crawled toward the passenger door. That he emerged from the crumpled cockpit was improbable. That he was alive was incredible.

His injuries failed to impress, however. His broken leg was too wooden, his exposed tibia too gray, his movement too mechanical. His skin was too tight, his blood too thin, his face too transparent.

So it sounded at the time, before the herd realized no mas was no mask.

The pilot had no mask. He was Death, the destroyer of a high-income world.

The lights hit him like repulsors. The tributary beams converged to form a superlaser, a Death Star to destroy Death.

Trading resumed with a rally between shooters.

—It’s a temperature gun, not gaydar.

Videos of the pilot’s death lived as lines of code. In response, politicians wrote new codes. They wrote codes of conduct, including background checks, licenses, and fees. They imposed fines and waiting periods. They made it hard to buy or sell a temperature gun.