Lessons from a tiny turtle. 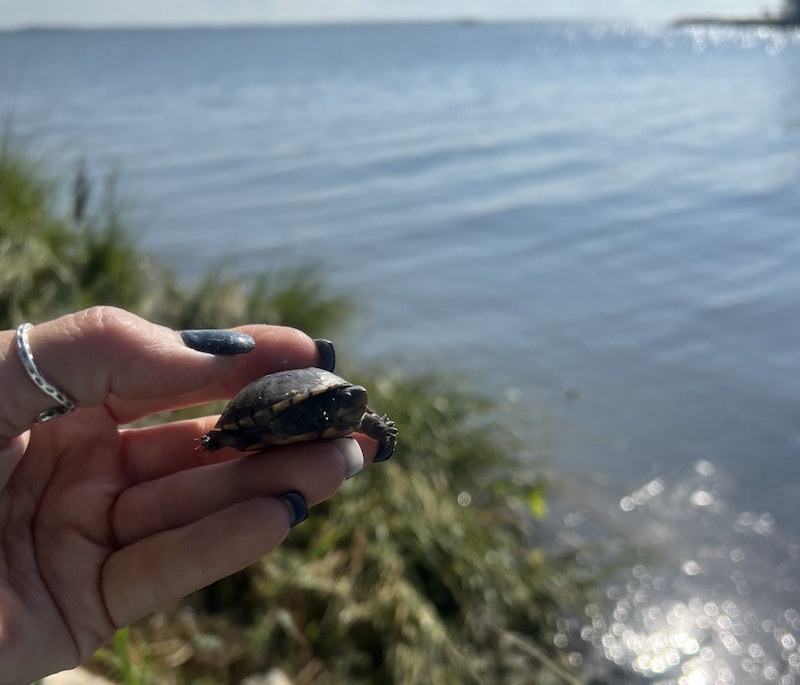 A minuscule turtle ended up in the driveway of my building on Monday. Barely bigger than a quarter, he narrowly escaped ending up on the bottom of a tire. He was brought inside where we stared in wonder at the tiny creature. We did what humans do—created captivity around a wild animal. I ran to grab a fig off the tree that overhangs our yard; he came out of his shell to munch at it. He was starving, we said.

We made a little “tank” out of an old Rubbermaid drawer, adding water, sand, driftwood and shells. We put it on an incline so he could “choose land or water.” We Googled, at first debating whether he was a Diamondback Terrapin or Snapping Turtle, the most common in our area, and soon discovered it was an Eastern Mud Turtle, which none of us knew existed.

I tried to get back to candlemaking, but had a tiny turtle peeping out at me from inside his shell, its life and future in the balance. I knew from the local mother terrapin who annually dug holes and laid her eggs and then peaced out, that turtles apparently don’t give a shit about their offspring. These guys are on their own from minute one. The moms are like look, we gave you life, we covered the eggs so a hawk wouldn’t eat you, what more do you want from us?

I’m pouring candles, the turtle is staring at me. There’s a thunderstorm outside. I pick him up and give him a little motivational speech that everything will be okay. I text my three daughters—one will be a veterinarian in May, one is in graduate school for environmental forestry and one is at Johns Hopkins for environmental science. The general consensus is, let him go, the longer I keep him “in captivity,” the lower his chances for survival.

The storm’s insane, my phone flashes the severe weather advisory, the lights flicker on and off. I wrap up Halloween candlemaking and we head to the car because it looks like he’s going to spend the night at my cottage and I’ll have to let him go in the marsh in the morning. He’s swimming on the water side of his “tank.” At the cottage I set up a warming light and he’s hiding under the half of a beach-found teacup-cave I made for him.

In the morning, I walk him down to the coastline; he seems really excited to hear the waves and feel the sunlight, and as soon as I put him down on the shoreline, which is covered in mud and seaweed, he digs down into the mud; his natural habitat. I cry like a little idiot bitch baby. My natural life habitat is crying, emotion and abandonment issues.

Why do we always have to say goodbye? Nothing is forever. Learning to say goodbye is one of life’s hardest lessons and the singlehanded thing that probably fucks people up the worst, mainly because it isn’t always a choice. Often it’s a situation that’s hoisted upon us. Whether it’s a breakup, a death, a job change, a move, time and time again in our lives we find ourselves having to say goodbye or perhaps dodging the goodbye and swallowing the misery, sorrow and heartache that come from the goodbyes that never got said. (I’ve written before about my girl crush on Laura Branigan. She has a great song “How Can I Help You Say Goodbye?”.)

Godspeed, little turtle. Thanks for the reminder that we need to appreciate the time we have with one another because we never know how long it’s going to last and when it’s time to let go, the best way to do it is peacefully.