A Baltimore statue is no stranger to controversy. 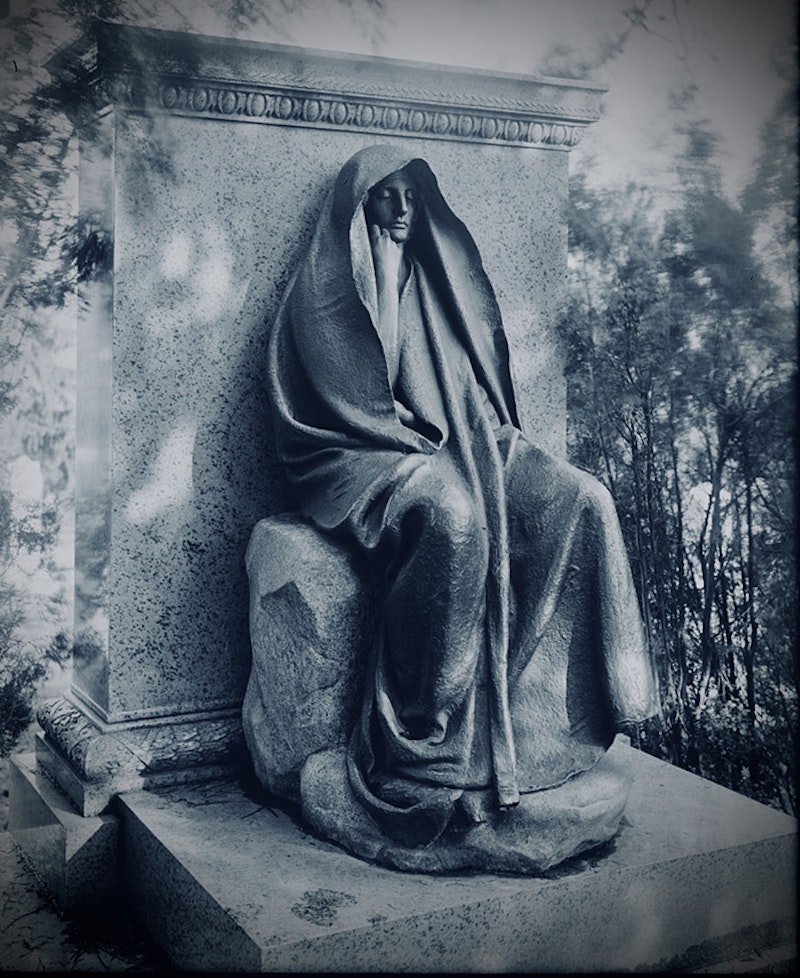 A breeze sends fallen leaves cartwheeling down the street. We’re entering the fright season on a crisp day. People like scaring the daylights out of one another at this time of year. Consider an autumnal event that stands out in your life for a moment.

Some may recall a local urban legend called “Black Aggie.” The sculpture, shrouded in mystery, surrounded by several rumors, has a disturbing moniker that Baltimore residents who remember are uneasy with. Superstitious high school students discussed the statue a lot in the 1960s. “Are you going to visit the graveyard at midnight?” Unlocking hidden secrets about folklore can be revealing; first: there were two similar statues; both still exist in the region and have strange prior histories.

Back in 1926, residing in Baltimore’s outskirts, a notorious statue sat guard over the Druid Ridge Cemetery family plot of General Felix Agnus in Pikesville, MD. Affected pompous business and newspaperman, the former Civil War vet General Angus was often quoted as saying, ”Shot 13 times, always in the front,” had purchased a knock-off graveyard figure based on “Grief” from sculptor Eduard Pausch. Then the stories started.

Visitors always drove slowly past the bronze sculpture. No grass ever grew in its shadow. Obscured under a long veil, a woman’s gaze watched you. At midnight, those same eyes shimmered glowing red, searching for victims. Unlucky ones caught in the crimson light beams were permanently blinded. Oh, no. Through the moonlight, only a few brave souls had the courage to go sit in Black Aggie’s lap. The arms of the statue would reach out. Suddenly, there’s difficulty breathing, terrified by the grip of an inescapable growing crush followed by a death rattle. The next morning, a shocking scene: a dead person, frozen in a scream, sits in her lap.

With that kind of legendary street credo, the cemetery attracted every teen trespasser in Baltimore history. The unwanted attention took decades to rectify. A nocturnal battle raged on as beer-sodden frat hazing initiation rituals continued, coupled with vandalism. The events helped solidify a Maryland myth with some bizarre twists and turns.

In a circus of coincidences, Clover hailed from an elite, mentally unstable, wealthy New England family, and was rumored to been inspiration for Henry James’ character Daisy Miller. In the early days of photography, photographers produced all aspects of their photographs from scratch. Clover Adams led a tragic life. Maybe there was turbulence in a woeful marriage; it was rumored the talented photographer’s micro-managing husband Henry wouldn’t allow her work to be published. Unable to live, she suffered with depression and passed away suddenly in 1885. At 42, she drank a vial of potassium cyanide from her own photo chemicals and was later discovered on the floor next to a fireplace.

The distraught, inconsolable husband must’ve felt some guilt because he commissioned a significant work of art in her honor. Augustus Saint-Gaudens, a celebrated artist of the Gilded Age, created the original “Grief.” The bronze sculpture was cast in 1891, with its detailed stylings it makes references to notable architect Stanford White’s work. The figure’s framed within an egg and dart framework molding, fashionable at the time. The graveyard where the original Adams memorial is located is Maryland’s Rock Creek Cemetery.

The Baltimore statue continued to wreak havoc for decades until it was finally donated to the Smithsonian in 1967. Be careful if you visit to Washington DC, she may overhear your conversation in person. The Angus statue was relocated in the National Courts Building courtyard garden behind the Dolley Madison House on Lafayette Square. Daylight hours only.

Hundreds of hidden places, some of them haunted, unearth intense feelings; places where someone’s died, where distant memories linger on, or an unknown presence remains. If it’s pointed towards evil, feelings become stronger than we could imagine. Restless spirits like to hang out. As you unfold the mysteries, they promise to haunt us in afterlife. It gives one the willies.