Lady of the Flies

Because Lord of the Flies was already taken and eww, pig’s head. 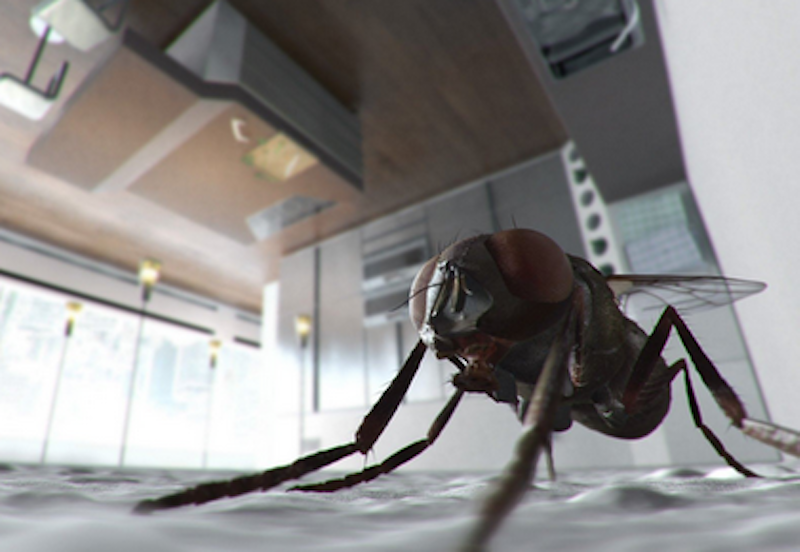 I’ve never lived in the country in the summertime before now. It’s barely even the start of summer and already I’m beginning to see how having flies in your house can massively piss you off. Until now, I’ve lived a suburban existence that consisted of a “Where’s the fly swatter?” “Just get it with a newspaper” type attitude about flies, and let me tell you, those days are over.

One day, there were just flies. It was like the fly scene from The Amityville Horror, as if there were hidden fly eggs everywhere and they just—hatched. Fortunately, the kids became competitive over who could annihilate the most flies via the most acrobatic/aerodynamic fly kills, which helped take care of many. My daughter made a “Fly Assassin” movie with soundtrack that we all watched and enjoyed.

But this is no time for fun and games. A fly in my writing office means I can’t think, and I’m not very talented with the fly swatter. It just makes me madder when I miss them. And then one night shit got real. A fly kept me up for half the night by buzzing around my head. No sleep for me quickly escalates into a migraine, which is a deal-breaker as a mom of four. It was bad enough getting used to the mockingbird that lives outside my bedroom window and makes all kinds of noise. I don’t even think Harper Lee was trying to be deep and symbolic when she wrote her novel, I just think she had a damn bird outside her window and woke up thinking the words I WANT TO KILL A MOCKINGBIRD every day.

So that’s when I Googled the flies. Lying in bed around four a.m., I read, scrolled, stalked and researched. What do flies hate? What do they love, so I can attract them and kill them just when they think they’re happy? How can I make them suffer? What’s their email address, so I can put them on 34,732 spam lists? Where do they sleep, so I can find ways to keep them up all night? The basics.

I discovered that flies don’t like mint, and they really hate lavender oil, and aren’t big fans of tea tree oil. I found out that you can put plain dish soap and water into a spray bottle and if you spray them with it, they’ll die immediately. So, in full war mode with various spray bottles of dish soap, OFF and essential oils tucked into or hanging out of pockets, I began the mission. I planted mint in pots near the doorways to the house and put a huge vase of mint next to the kitchen sink. Flies love dirty kitchens, and although I’m pretty good about not keeping dirty dishes in the sink, I’m now an OCD psycho about a kid leaving a single milk-still-cold cereal dish in the sink. The “Just put it in the dishwasher” line I’ve been saying for years now actually happens because my kids don’t want to get sprayed with lavender oil.

I took the lavender oil and went around to each of the four exterior doorways to the house, rubbing it gently into the wood around the door frames in places where the rain couldn’t reach, reciting fly voodoo rituals and chanting and dancing. I was obsessed.

And the next day something funny happened. I walked into the kitchen in my “where are they” mode because I’d gotten into the habit of seeing how many were in a room when I came in. I couldn’t find a single fly. My husband said “They must be gone,” and I just stared at him. Was it possible? Could I have eliminated the enemy after only one guns-blazing battle? I drank coffee like it was the cup of victory and as I sat in the kitchen, I saw a fly out of the corner of my eye, landing right beside the $10 bottle of lavender oil. I think I could hear him laughing.