Two Weddings and a Half-Empty Bottle 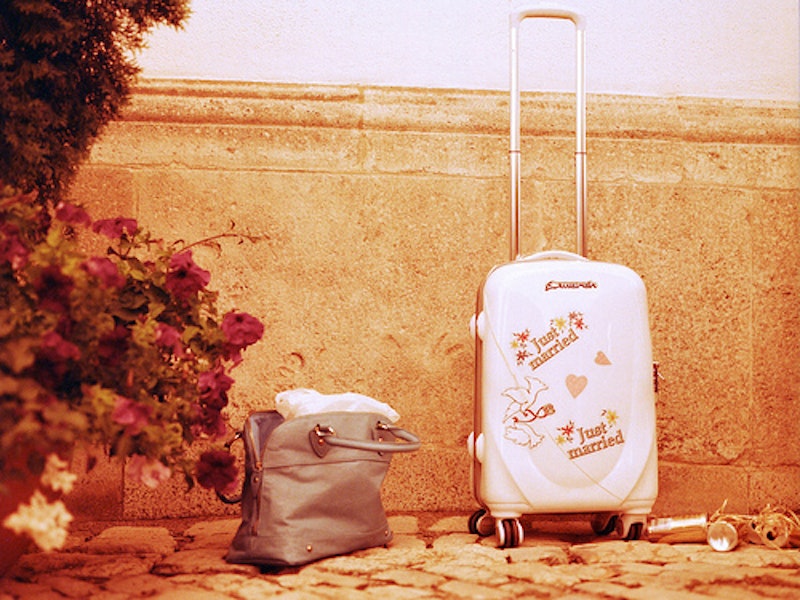 When I was 20 or 21, I remember drunkenly passing out in a friend’s backyard. My friend Kat lived with her parents in a huge country house, on a 10-acre plot that overlooked the high school and the pre-fab commuter sprawl neighborhood of Whispering Hills on the outskirts of Smithsburg, MD. Because there was a finished basement—with a bar, bedroom, pool table and a 65” TV—and because her parents didn’t really care if we got fucked up so long as we didn’t drive anywhere (we did, but only after they’d gone to bed) this was, for years, the de facto party house. I remember when I woke up it was sometime after three a.m.; it was raining and there was a half empty bottle of Cutty Sark next to me. I made my way back to the basement only to find out the party was over and everyone had left. This is not so much a good story as it is a relevant metaphor for my life.

This summer there are two big weddings. Last weekend my best friend from college got married; in two months my best friend from high school will do the same. I’ll never understand weddings—all that money spent on one day, after which you just go back to the same life you had before, except with a new blender and some tax breaks. An ex-girlfriend once told me she’d just wait until a guy convinced her it was worth doing. I was obviously not that guy.

The wedding last weekend was on a farm near Deep Creek Lake in far Western Maryland. I drove up to the rehearsal Saturday morning, downing Advil Cold and Sinus with some of that syrupy Odwalla Superfood juice. What I thought was allergies the day before turned out to be a pretty awful cold, though two hours later I was doing okay, and the Bloody Mary’s at the post-rehearsal brunch took care of the congestion. I went fishing and strummed on a guitar. Bloody Mary’s and fishing are two things I’m starting to like a lot—soon I’ll probably start buying wrenches and watching reruns of Dallas.

After brunch I drove out to Rocky Gap casino and paid off my wedding debts playing poker. As someone who doesn’t own much in the way of fancy attire I can tell you that new leather shoes aren’t cheap. Rocky Gap’s poker tables (all two of them) are awkwardly situated at the back of the foyer, near the hotel check-in desk and above a cafeteria. There’re some slots too, and $5 min blackjack and roulette. It’s not so much a casino as a desperate attempt to salvage the luxury hotel. While I was smoking an old woman proudly told me she’d won $70 last time, and asked if I’d ever been to Perryville. “They have a big damn casino out there!” (No they don’t).

I told Brad, my best friend from high school, that before his wedding I’m going to tie him to a chair and make him look at all the photos we have from 10 years ago, back when he had hair and wasn’t so fat, like in A Clockwork Orange, except instead of Ludwig Van it’ll be Modest Mouse. I think he appreciated it, but he hasn’t been answering his phone much since. As I write this the Orioles just left the bases loaded again, and my Yuengling can went empty. Where’s my wrench?