How to Get Rejected While Trying Pretty Hard

The ups and downs of freelance pitching. 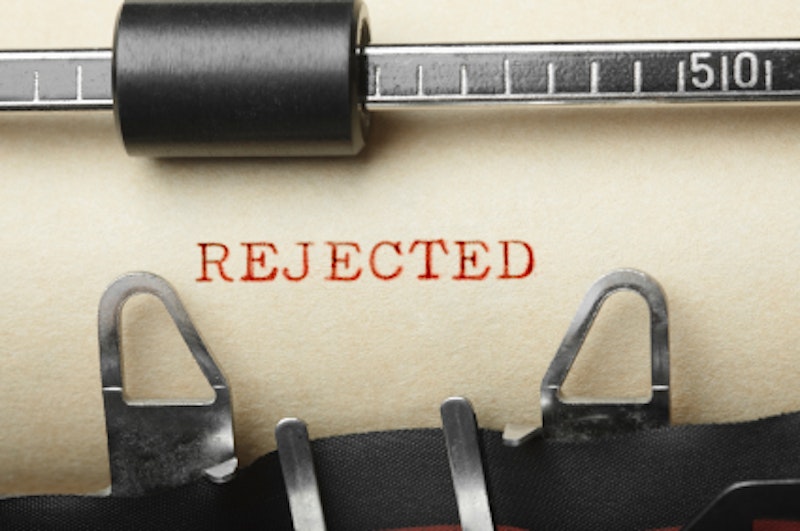 The worst thing about freelancing is the constant rejection. No matter how battle-scarred and hard-hearted you are, it still sucks to have people constantly tell you that your ideas aren't good enough. Like other writers, I’d like to learn some secret formula that would get me to the point where only 40 percent of my pitches are rejected, rather than half or more. And so New York Times culture editor Adam Sternbergh has kindly attempted to help, by posting a series of tweets (some storified here, later added here) which explain just what editors are looking for in a pitch, and how you can make sure you don't get pushed to the bottom of the electronic slush pile.

Now, "largely useless" doesn’t mean "entirely useless." In fact, if your goal is to pitch specifically to The New York Times culture section, Sternbergh has a bunch of details that I'm sure would be valuable. Sternbergh says that he wants short pitches. He wants stories with characters and conflict, not ideas. He doesn't want to talk on the phone. Those are good, practical details about what Sternbergh wants, and if I ever pitch him at the NYT, I'll definitely keep them in mind.

But the conversation around Sternbergh’s suggestions (at the storify link for example) seems to be couched at least in part in general terms—not as a style guide for what the NYT in particular wants, but as advice for what editors more broadly want. And the problem here is that different editors want really different things. Most editors don't want to talk to you on the phone, it's true… but I've had some who did. Some editors may want short pitches, but others like more detail. Some editors are looking for ideas, not stories, and in a lot of cases, ideas and stories are both really secondary to having a good news hook.

In fact, one of the most important things about freelancing is that there isn't a formula. That's the nature of the job. You're working for a bunch of different clients, and pitching to different outlets, and none of them will have the exact same procedures or expectations. This is a good thing to some degree, because it means that if your pitch gets rejected at one place, it might be accepted somewhere else with different priorities. But it's a frustrating too, because it means that you can't get into a groove (or even a friendly rut) the way you can when you work for a single employer.

Sternbergh addresses this in a tweet from earlier this week, where he writes: "If you're not sure if your idea is right for that magazine you shouldn't be pitching that magazine. Not until you're sure." Again, there's some truth to that; you should be at least somewhat familiar with the venues you write for. Pitch the story about the local Chicago arts show to the Chicago Reader, not The Atlantic. Pitch the story about Chris Ware to Comics Journal, not Dissolve. That may be obvious, but I know, for example, that Comics Journal would sometimes get pitches about stand-up comedy—so if you do a little research, you're going to be ahead of competitors.

The ugly truth is that successful pitching often has less to do with the form of the pitch, and more to do with that somewhat humiliating ritual known as "networking." But that's hardly unique to freelancing; if you're lucky enough to know someone who knows the right person, you can get past a lot of the red tape that’s set up to provide overworked employers/editors with some rubric for weeding people out. When you're pitching cold without an introduction, there's not much you can do but try to do due diligence, follow the submission instructions, and cross your fingers. It’s disheartening. On the other hand, at least you'll know that getting rejected doesn't mean you're doing it wrong. It just means you're a freelancer. Welcome to the club.