Ignoring the icebergs dead ahead. 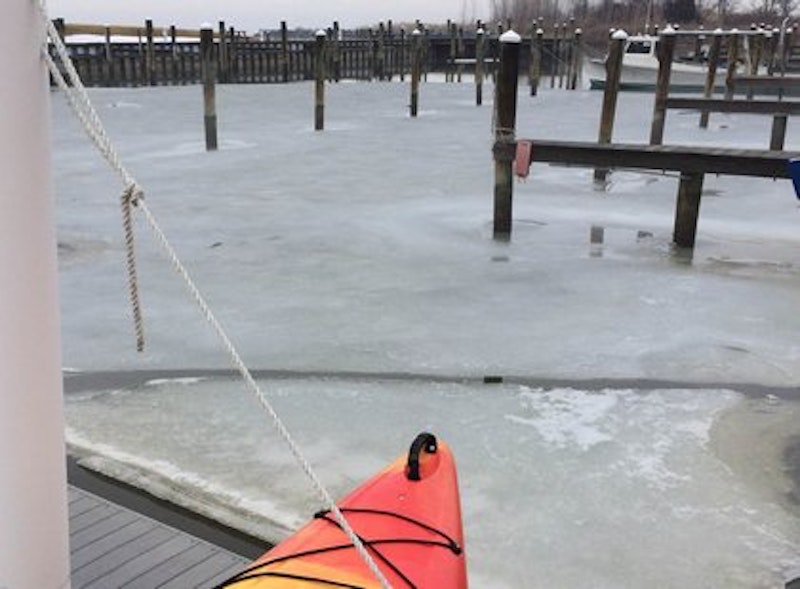 The first 50-degree day finally came last week, so I planned a kayaking/sea glass hunting trip. It would be my first after a long winter filled with dreariness and frozen-solid coastlines.  I drove down to the island where the kayak had been stored since my last trip out in December, before the weather got brutal and pounded us with ice and snow for months. After a few 40-plus degree rainy days, I optimistically hoped the shoreline would be thawed, ignoring the fact that I’d driven over the Chesapeake Bay Bridge the day before and seen huge icebergs floating around.

Arriving at the marina, I noticed that my kayak wasn’t frozen to anything, a good sign, but saw ice when looking out at the kayak launch area. I started to put my boat in the car and head out to try to find water that was actually water, but something stopped me (insanity, stupidity, or some typical combination of both). There was water at the edge of the dry dock where I could launch, icebergs were moving and had large cracks between them, and there was what appeared to be a very narrow waterway beside the wooden bulkhead.

I figured if I could jump in my kayak so it slid over this one smaller area of ice, I could make it over to this narrow area and sort of pull my way along the bulkhead past the four docks or so until hitting the open water. Typically, I made the decision to launch the kayak without regard for consequences, assuming everything would work out somehow.

I climbed the metal ladder down to the floating dry dock, getting my bearings standing on what is essentially a huge surfboard tethered to the land. I slid my kayak down to the dock, pointing it toward the “water.” There was too much ice against the dock to put the kayak parallel to it, which meant launching straight out, essentially sliding down into the water head first, but only by six inches or so. What could go wrong? I got in, shimmied the kayak to the edge of the dock, used the paddle to push me off, and let the boat slide into the murky, icy water.

I was met with the scraping “thonk” sound of the vessel grating against the ice and coming to a stop by wedging itself between the largest iceberg and the bulkhead. It was now apparent that there was not even close to enough unfrozen water to manipulate the kayak through to the channel. Oh well, I thought, I’ll just back this plan up, throw the kayak in the car and find another launch site. Easier said than done. The smaller iceberg closer to the floating dock had shifted, and in trying to “reverse,” somehow my kayak had gotten diagonally wedged between the two blocks of ice. I used my paddle and fruitlessly scraped at the shushie-on-top ice layer, trying to move back to the dock. Nothing. I saw a rope hanging from one of the piers but couldn’t reach it to try to pull myself out. I realized that even if I could get the boat out of the ice jam, I couldn’t pull it parallel to hurl myself onto the dock. How was I going to get out of the water? It was something I hadn’t really thought about going in. Mind you, this is only about four feet of water. I looked at the bottom, trying to estimate how soft the mud was at the bottom. In many places around the island, the mud is like quicksand and would eat my insulated, waterproof boots in a matter of seconds, sucking them off my feet. Also, if I got into the water, and if the bottom didn’t eat them, my boots would be obviously be soaked, ending my chances of kayaking anywhere else that day.

After a little more time trying to maneuver the boat and getting nowhere, I made the only decision I could. I removed my boots and warm, fuzzy socks, and rolled up my waterproof kayaking pants as far as I could, given they’re designed to be skin-tight, so up to about my knees. I knew if the mud sucked me down barefoot, I could lean on the kayak to keep me afloat. It was time for the world’s worst captain to suck it up. I climbed out of the boat, not even trying to grip onto the floating iceberg, lest I float away like Rudolph the Red-Nosed Reindeer. I slid down it until my feet entered the freezing water. I moved fast; frostbite would render me useless in hauling my bright orange and yellow L.L. Bean vessel out of the brackish bay.

In a few fast-moving moments, I’d thrown my paddle atop the floating dock and holding onto one of the boat’s end straps, flopped myself, like a large stranded marine animal, face down onto the dock. It was then for some reason that awareness surfaced: at least six homes face the marina. If anyone was in the houses, someone was enjoying a comedy of errors that I hope wasn’t being videotaped for some kind of boat-safety parody video on YouTube. I hoped at least they’d pick a good background song. I’ve never been so happy to put on a pair of socks in my life. For a moment I wondered if the boat captain who owned the marina was home, but I assumed he would’ve come out at some point to either recommend against the launch or assist in the water rescue. Or would he?

Leaving a note thanking the marina captain for storing the kayak over the winter, I hauled the boat out of the water and into the car, heading to another launch spot that was thawed, but also unfortunately surrounded by the raining sound of hunters’ gunfire. The kayak stayed in the car, and I stayed on the land, looking for sea glass by foot. I was rewarded with some amazing pieces: a rare yellow bonfire marble, a miniscule cobalt bottle.