I spent my spring break in freezing Pennsylvania. 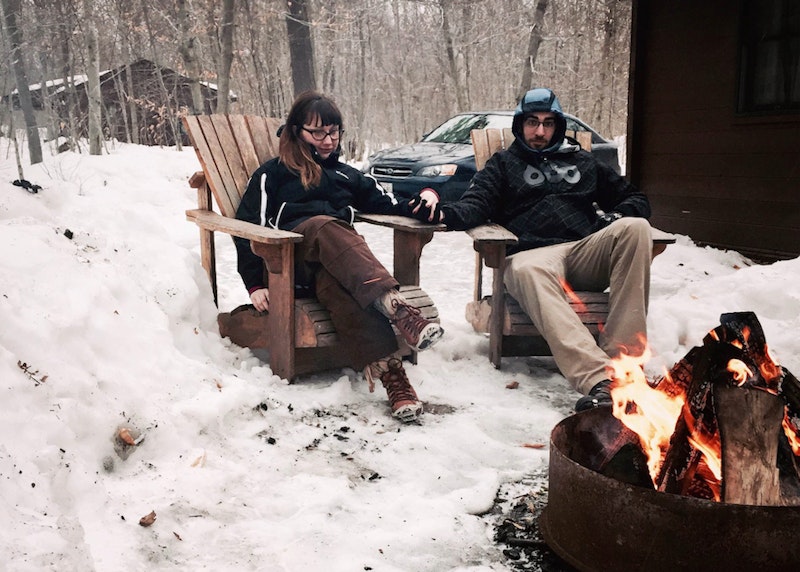 Last weekend was the start of my school’s spring break. After enduring a snowstorm, the idea of spring was far from my mind and the break came as a surprise. The last few hours of class were spent daydreaming about warm places, ignoring the fiscal blockades that made such plans unrealistic. When classes were over, my boyfriend suggested we go to the mountains. Though we go to different schools, our spring breaks were scheduled for the same week. After sweet-talking a park ranger out of a rule that one must make reservations at least 48 hours in advance, we secured a cabin in Ricketts Glen, Pennsylvania. The ranger advised us that they’d just been hit with a snowstorm that left two feet of snow on the ground, but we didn’t care. Plus, we figured the warm week before had melted much of the snow.

We took the scenic drive up along the Susquehanna River, through a few odd towns outside of Harrisburg, which unabashedly advertise dozens of sex toy stores and theaters alongside billboards of biblical quotes. As we ascended into the mountains, we realized that the ranger wasn’t kidding. Huge clumps of icicles grew where waterfalls usually plummet and snow coated the bare branches and forest floor. After losing cell phone service and reaching approximately 2,400 feet, we found our cabin. A sheet of translucent ice covered the parking spot. We were prepared with Yak-Traks, micro-spikes that attach to boots to give them traction in the ice and snow. The cabin had electric and heat, which was promptly bumped up to 72 degrees. Outside there was a fire pit and an icy picnic table. The sun was setting when we arrived. While preparing dinner, we realized we had forgotten utensils. Luckily we had remembered to bring paper towels.

I made a breakfast of peanut butter-banana pancake sandwiches that were easy to eat without forks, and eggs, which we ate with a single spoon we’d found. Snow was lightly falling outside. After dressing in ample layers, we set out. Before making it to the car I felt that my old hiking boots were not waterproofed enough to combat the snow. I went back in and tied grocery bags around my socks and put them back on, which worked well.

The night before had frozen the top layer of snow into a (mostly) solid sheet of ice. With Yak-Traks, hiking was hardly more difficult than usual. There weren’t many others brave enough to set out in the weather; so perfect silence made our walks peaceful. The evergreens muffled the sounds of cars on the nearby road and few animals were tempted to come out of their burrows and nests. We carefully trekked down part of Falls Trail, most of which is closed except for expert ice climbers. The falls were almost completely frozen, though water still rushed under a thick cover of ice. It was difficult to tell where the ledges ended in the snow, so we stayed on the tracks that others had made.

After a few long hikes we returned to our cabin and made a fire, which we used to cook hot dogs, his made of meat and mine soy. As we sat on old wooden Adirondack chairs and enjoyed the heat of the fire as snow fell around us, I realized that I hadn’t thought about school or work since I’d been there. The flames flickered in the wind and I was content in that moment. After returning home, the stress-level decreased. For once, my miserable math class was okay. After stepping away from my day-to-day life, it was more apparent that I overthink what invokes stress. When putting on my coat, I smell the lingering scent of smoky campfire that reminds me of the days spent in the woods, learning to forget for a while.