At least to older Irish-Americans. 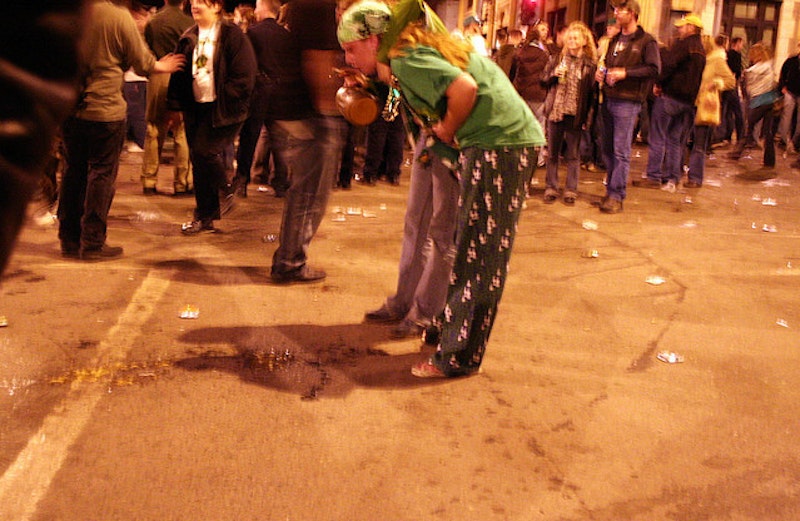 I wore green yesterday, more out of habit in marking St. Patrick’s Day than a statement about my Irish ancestry. Besides, green’s my favorite color, so, in my static wardrobe—corduroys, turtlenecks and work boots in the winter; shorts or khakis, polo shirts and sneakers when it’s warm outside—it figures prominently. Pub crawls have no place in my rather sedate, middle-aged and routinized lifestyle, but years ago, in the 1970s, 80s and early-90s, like a lot of young people, March 17 was circled on the calendar.

There was just one time that the imbibing of Harp’s, Guinness and Jameson’s impinged on my work: it was 1975, and my friend Ken Sokolow and I took a break from duties at the Johns Hopkins News-Letter, on a production night, and choked down some corned beef and cabbage, along with too many beers. One led to another at this Mt. Vernon dive, and as the clock struck eight, the unpleasant recollection that I was on deadline put a wobbly spring in my step back to the office. I was met with hairy eyeballs upon returning, even from subordinates who were normally deferential to my position as features editor. It took me 45 minutes to clank out on an ancient typewriter the worst story I’d written in months: a dopey bit on the then-current myth that the popular Bubble Yum contained spider eggs in each piece’s nauseating liquid center. My chaw of choice was Bazooka—a refresher from packs of Newports—but I’d recently chatted with six-year-old nephew Caleb and he filled me in. The first draft was incoherent, but I soldiered on and got the dumb article to the typesetter on time.

It was kind of mortifying over the next week when it turned out this garbage was the most popular story in that edition of the paper. Praise the Lord that time travel didn’t exist, for today such an effort would find a happy home on idiotic websites like Thought Catalog, or, if the blarney was shining on me, maybe even BuzzFeed!

The past 25 or so years has relegated St. Patrick’s Day to, well, not much of anything, aside from random pictures of green beer on social media sites, and clichéd Irish jokes. “It’s just an excuse for drinking,” was a comment I read over and over on Twitter, as if the same weren’t true for the Super Bowl, Independence Day and Halloween. I read a series of tweets from a disgusted New Yorker who let her followers know that she’d witnessed a blotto young man, with a plastic green hat smothered in shamrocks, puking into a trash can at 10 a.m. in Manhattan’s Penn Station. That’s uncommon? Every time I’m in that criminally broken-down facility (you’d think Mayor Bill de Blasio might limo down to D.C.’s Union Station for a few pointers), no matter the time of day, I see similar behavior. Mere barfing doesn’t even merit a second look; it’s far preferable to seeing a guy in a business suit whipping it out and taking a piss in a Men’s Room sink. That’s nasty.

One footnote: earlier in the 20th century, St. Patrick’s Day was a far bigger deal, or so my parents told me as a kid. One year, late in the 1930s, my mom was working at a Schrafft’s in Manhattan, a de facto Irish branch of the once-legendary, and affordable, eatery, and a smart-aleck gal strode in wearing an orange blouse. The reaction was so incendiary—for those who’ve no interest in history, orange was the favored color of the hated Northern Irish—that the woman quit by lunchtime. It was one of Mom’s favorite yarns every other St. Patrick’s Day or so, and the smoke still came out of her ears while passing down this snippet of family lore. Frankly, smoke came out of my ears at dinnertime on March 17, just looking at her unspeakable slop of corned beef, cabbage and boiled potatoes—sometimes canned!—but it was, in retrospect a small price to pay for her very entertaining anecdotes of growing up in the then-Irish Ghetto of the South Bronx.