It’s a Silent Day in the Neighborhood 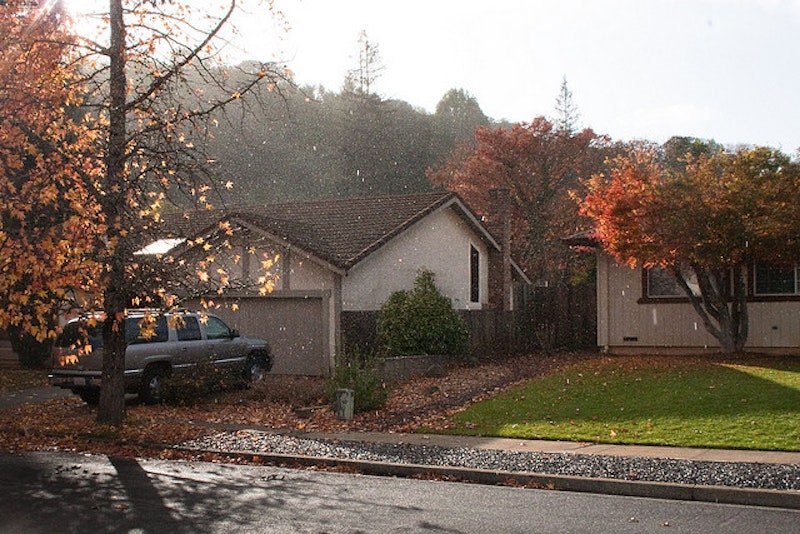 It’s hardly a novel observation that the concept of the American Neighborhood, at least in metropolitan areas, has changed dramatically in the past generation. Merely cultural evolution, I suppose. My family lives on a one-block street in north Baltimore, with 10 or so houses, and, gun to head, I’d be a dead duck if forced to recite the names of even half the neighbors. We spent an hour or so at a quite grand Christmas Eve party six weeks ago, hosted by the couple who live next door, and at one point I was engaged in conversation with a whimsical elderly man—a retired financier and lifelong Baltimorean who expressed regrets that he chose the pursuit of wealth instead of becoming an artist—who was the guest of my friend Norm. Of course, “friend” is a relative term, for as Norm said in introducing me to the fellow, “Russ and I wave at each other on the occasions we’re fetching the newspapers at the same time in the morning.”

We both laughed, realizing that if this off-handed jibe was stretching the truth—in fact, we may banter about sports or our kids (never politics, since he’s a staunch Democrat) every other week during the summer—it really wasn’t too far off the mark. Anyway, at this particular party, while my wife was off in another room talking to once-a-year acquaintances, other than the friendly octogenarian, I was lost, alone in a room full of people, and so kept close to the makeshift bar where my son Booker was pouring drinks—a very generously compensated hired hand—for the festive crowd. It reminded me of bashes I used to throw as a weekly newspaper proprietor, back when the business was far more jolly, and I needed an assistant editor to whisper the names of approaching publicity flacks or even occasional contributors who didn’t stop by our offices very often. That’s understandable, and reciprocal, at such public functions, but this was a neighborhood party, and so it seemed puzzling and a bit weird.

Really, the only impromptu times when there are more than four people outside on the block are during power outages or when a water main breaks, flooding the street and we’re waiting for resentful city employees to show up and shut off the water for up to 12 hours. We all agree that this really sucks, and then swap stories about outrageous property tax hikes.

In fact, I think I learn more about the neighborhood and its inhabitants when, each evening around midnight, I step outside to take out the garbage and smoke a cigarette before checking my computer one more time ahead of hitting the sack. Given my druthers in an Aladdin’s Lamp sort of way, it’d be perfect if the climates of Southern California and the Northeast could do a switcheroo for the rest of my life. Aside from extended travels abroad, and a six-month stint in Denver back in the 1970s, I’ve lived on the East Coast—Long Island, New York City, New Jersey and Baltimore—since birth, and you can keep the wondrous four seasons, the package-tour fall foliage and springtime cherry blossoms and azaleas and all that other nature stuff. Yes, it’s still rather stunning to see, on a windy Indian summer day in October the shimmering red, orange and yellow leaves, but then one thunderstorm wrecks it all and you’re on the way to a dreary winter. Give me a static climate where the temperature rarely dips below 60 degrees, with hardly any rain (and certainly no snow) and I’d be very happy. Fantasies aside, I do find it fascinating to chart the time of year, and the goings-on of the neighborhood from my back porch.

Just last week, during a nasty snow and ice storm, I stood on the stoop, surveying the damage done to the trees in our backyard—landscaping, it bears repeating, is nearly recession-proof, as small outfits lay low in the winter, and then come April spruce up your property, often replacing bushes and small trees that they’d planted just the year before—and I could hear one of the neighbors cleaning up his driveway and sidewalk with a snow blower. Now, years ago, that kind of noisy work at midnight would cause someone to open the widow and yell, “Hey, Harry, knock it off! We’re trying to sleep.” Today, no one seems to notice, or, like me, really care. Maybe it’s the triple-strength windows of the modern age.

During the annual summer drought here in Baltimore, I hear the automatic watering system click on at the same house, exactly at midnight. Other nights I can listen to rather loud domestic arguments, which really isn’t pleasant and so maybe I’ll sing an old rockabilly song to block it out. One time last July there was a party going full blast not too far away—I wasn’t sure from which house—and over and over the tired tune “I Will Survive,”  with full audience participation, droned on. But it didn’t tick me off, really, since it was fun to imagine the happy revelers, blasted on beer and frou-frou cocktails, belting out a song that was released before most of them were born.

There’s one home down the block, occupied by a convivial inter-racial gay couple—of course, in the days of neighborhoods as they were once known, these fellows wouldn’t be living here; in fact, Jewish homeowners were frowned upon until 1970 or so, when Baltimore City was still moored in Southern trappings, and I mean that mostly as a pejorative—where about five times a year a splashy garden gala goes on, inevitably topped off by fireworks. My wife and I have been invited in the past to a few of these parties, but they’re always adults-only affairs, so we’ve passed and are no longer on the list. And Norm threw a 50th birthday party for his wife Rose a couple of years ago—a must occasion, especially since she’s a doll—but after a half hour I got itchy, calling Booker every 10 minutes for progress on a Red Sox/Tigers game I was missing.

We were about to take our leave, give Rose a peck on the cheek, when I noticed two very good friends from the 1980s, Tom and Margaret, who knew the hosts, and it was swell catching up with them. Tom’s a card, in a dry, erudite way, and I’d often dine out with them (he reviewed restaurants for my weekly newspaper) and receive fashion tips from Margaret, at the time a high-powered financier. I inquired about their two very cool kids—frozen in time for me as in their teens—and instinctively dropped my jaw upon finding out that they’re indeed grown, in their early 30s and in the midst of flourishing careers. I knew this intellectually, obviously, but just as my sisters-in-law still call me Rusty, a nickname abandoned oh, about 40 years ago, it was still jarring in a cinematic flipping of the calendar pages way.

When I was a kid, living on Long Island, our then-modern Eisenhower-era development had 14 identical houses—some more spruced up than others—and it seemed that the lives of every family was an open book. In other words, lots of idle gossip. My mom burned up the trunk line finding out the latest “scandals” involving the neighborhood slut (a daughter of Christian Scientists, which raised eyebrows even more); the mysterious divorced man who lived alone with his really sour son; the very disagreeable family from Florida who moved to LaRue Dr. in the mid-60s and never really meshed with everyone else; or, the drunk next door who survived Pearl Harbor and had a sword from one of the battleships that was placed above the fireplace, his own Van Gogh. Not all the talk was petty: there would be barbecues and gatherings when the Good Humor truck came rolling up the street in the summer, and I can’t remember anyone ever having a bad word to say about the only daughter of a classy family (the dad was Egyptian, his wife a pre-feminist intellectual), who visited her parents occasionally from Manhattan, a mysterious and beautiful “older kid”—meaning she was about 24—who drew “hubba hubbas” from me and my 12-year-old cohorts.

That sort of culture doesn’t exist today, at least where I live. I have zero interest in the personal lives of our neighbors—and certainly don’t want to be burdened by any of their dark secrets—and the feeling, I’m quite sure, is mutual. In a way, it’s too bad that my sons didn’t, when in their early teens, have friends on the block to ride bikes with or play touch football, but they don’t appear scarred by the absence of that experience.